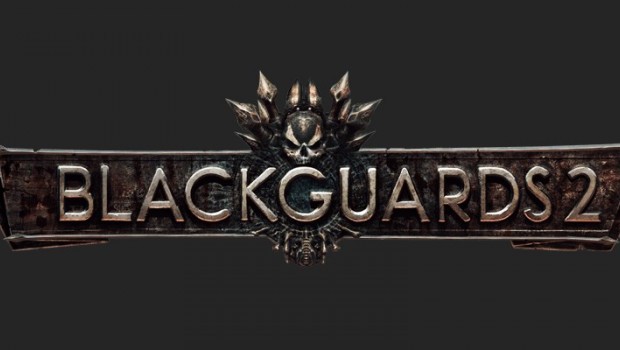 Summary: Blackguards 2 is here and keeping the franchise thankfully alive and it's a blast with a couple bumps.

Blackguards 2 is a Hex-Tabletop style turn based RPG created by German developer, Daedalic Entertainment. It has you taking on the role of Cassia of Tenos, a woman who was once royalty, and was cast by her husband into dungeons filled with corapia spiders whose bite causes madness or death. After four years in the dungeon she escapes, disfigured from the corapia venom, and dons a silver spider mask, with intent to conquer the land and rule under the banner of the Silver Corapia. 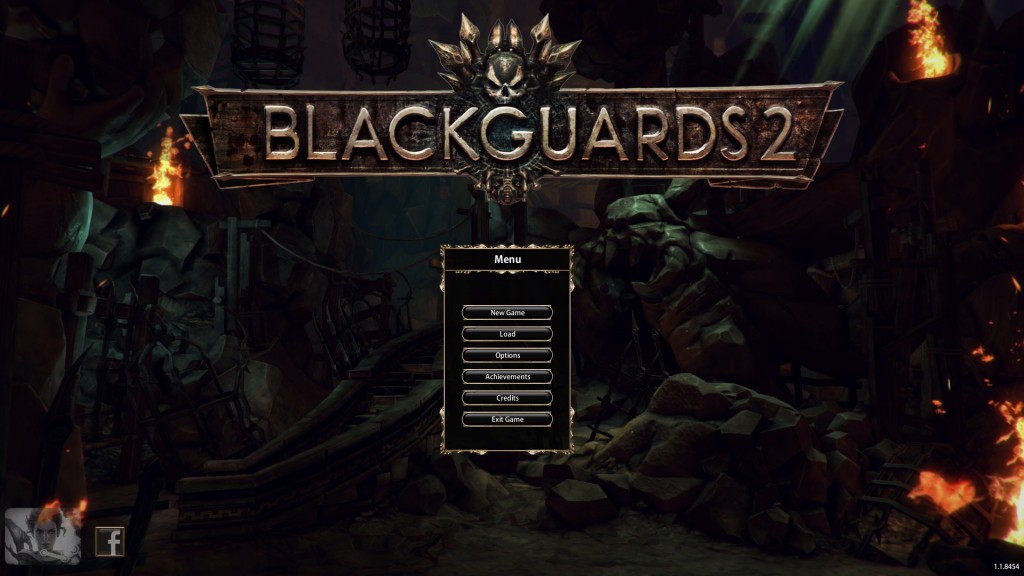 Each scene begins with a very nice looking comic style animation that has the effect of looking at a picture book, the game starts this way before leading into the first hub area, the dungeon. All of the hubs are simply click to select what to do, and you don’t move around while in cities. The tutorial is quite simple and throws you into the deeper dungeon in a desperate struggle to free yourself, though clunky at first, the game’s controls feel quite good after you get used to them.

After you’re out, the game opens up and you begin to collect your band of crazy merry men. The allies you can collect all have good personality, and although don’t come off as the nicest people, they still add a lot to the game when they squabble and interact. You can also choose to be good or bad in the game, and the choices seem a bit too black and white, (Murder half the village, or praise your mercy), and although that doesn’t detract too much, I feel it’s a bit too generic.

With everything set to high, the game looks really nice and has some awesome looking effects, however the game seems to be a bit of a resource hog for the type of game it is, and I needed to turn down the graphics in some areas to run at a steady framerate. for the size they are shown the character models are quite detailed and also have very good animations, the monsters and spells especially. I did find a little fps loss when moving around battle scenes, and during the first moments of battle, so it seems that loading objects isn’t as well optimized s it could be. Generally though the graphics look really nice, and the textures are excellent. 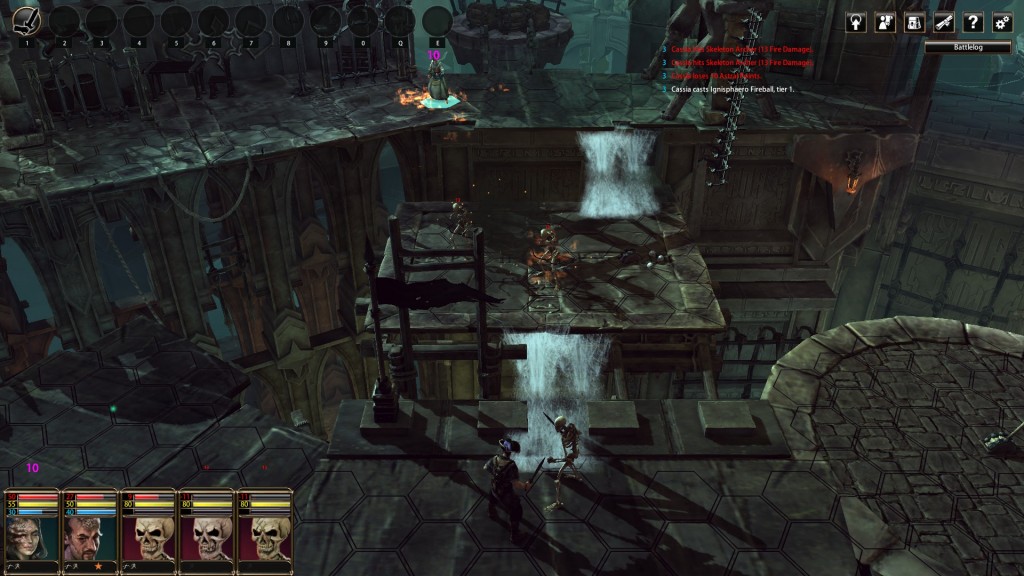 The game is turn based, based on initiative, a stat that determines order, and speed determines how far they can move. It uses a tabletop style hex movement and attack system. You can have it automatically select a path for you, or customize your path step by step which is great when there are hazards.

Generally the game has you fight against either large numbers, or a few powerful enemies that like to royally screw you over, one such scenario has you against a horde of enemies whose health regens at the end of each round, the goal is to make your way around the map, destroy objects and leave, however there is a powerful spellcaster that can paralyze half your team, and slow the rest with frost spells, it can be frustrating at times against those enemies, and that’s where your character upgrades really matter.

One good point is that enemies don’t seem to be totally immune to anything like in some games, for example during a fight against a powerful boss mage, I cast a berserk spell to force him to use melee instead of his spells, which made it a lot easier, and is something you might not be able to do in other games. 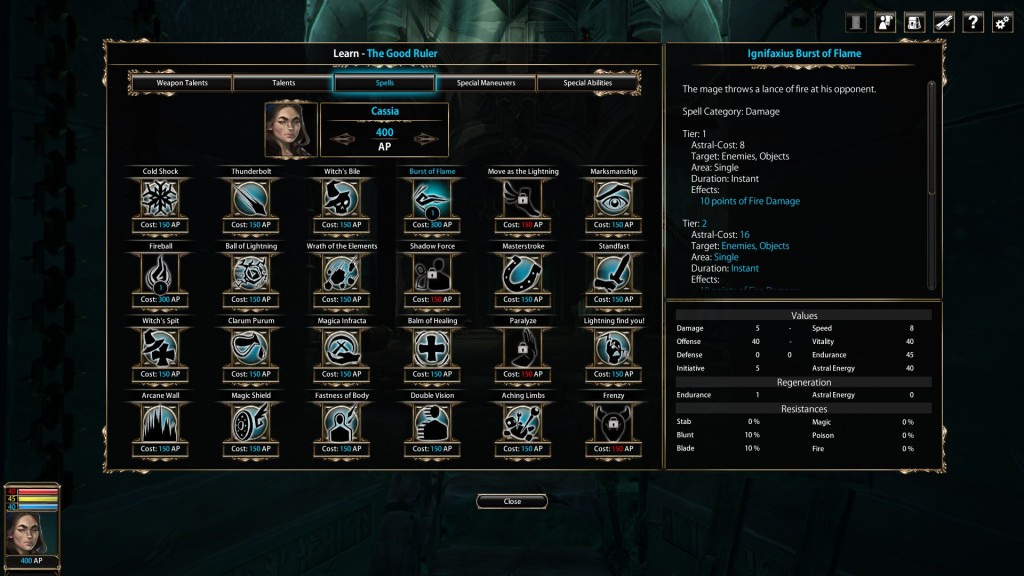 As you progress you can begin to conquer the land over a world map where every three offensive moves you do, the enemy gets one counter attack move. Most of the time I seemed to be in the area they counterattacked at, but when you aren’t in the area you have to defend with weaker soldiers from your army. I felt it added a nice pace to make sure you don’t overextend your forces. Each area you capture adds a nice bonus to the supplies sold in your camp, or the armament of your forces, as well as new units even. I did however run across a bug twice where an enemy used a move, and his turn did not end, and I was forced to quit the game as it got stuck, that happened twice over a period of about 14 hours, so that’s not too bad, but still frustrating, especially near the end of a battle. 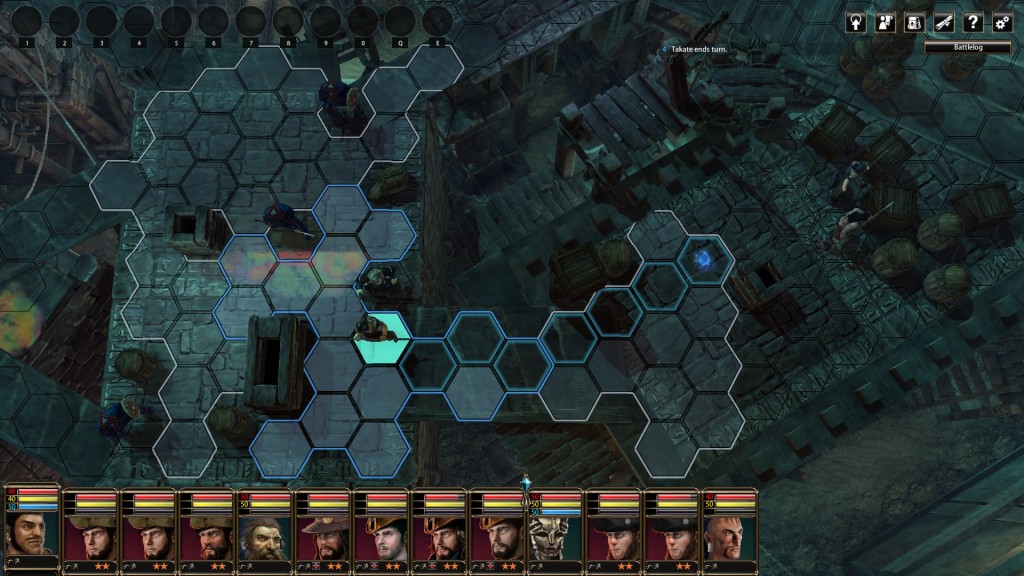 The UI, at first feels a little bloated and difficult to use, but quickly it becomes very easy to use and quite streamlined, you can customize hotkeys 1-9 for each character which is very convenient and well made. Clicking on an enemy can sometimes be a little fiddly, but isn’t an issue for the most part.

The skill system is well made, as you can pick a few upgrades after each battle and it’s as simple as clicking the plus next to skills you can upgrade, and clicking to unlock new abilities. Each party member comes with something they’re good at by default, A mage, spear user, axe. Cassia however can be customized however the player would like, and for me I went as a bit of a spellsword, powerful magic and good defense at close range. One of the more interesting things is that you can customize whether you want them to be more offensive or defensive, which is very useful for your characters, spellcasters especially.