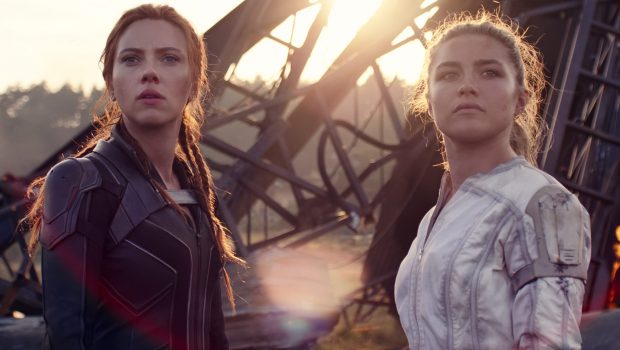 Freewill in Hollywood is scarce. Blockbusters purport to explore individualism overcoming violent oppression but the theme is predictably expressed with bloated cinematic continuity. No more is this apparent than in Black Widow, the Marvel Cinematic Universe’s twenty-fourth comic book adaptation. The rigid assortment of action and humour started with Iron Man (2008) over a decade ago but has long resisted innovation and change. Marvel Studios though is merely systematic of the homogeneous corporatism defining contemporary Hollywood. Few risks are taken when drawing young viewers away from their homes, cell phones, and streaming services. Marvel’s Kevin Feige is now one of the most powerful producers in Hollywood having crafted a Ford-like template to lucratively serve this demographic. Despite their staleness, not all Marvel films are unenjoyable. Black Panther (2018) and Captain Marvel (2019) offered contained stories that resisted excessive side characters and lore. Black Widow, directed by Australian filmmaker Cate Shortland, is also a standalone feature that proves promising and clumsy. A handful of interesting themes are suppressed by Feige’s derivative template and the bombastic instinct prolonging the series’ commercial intent.

This prequel is set between Captain America: Civil War (2016) and Avengers: Infinity War (2018). It explores the upbringing of the Russian spy character Natasha Romanoff aka Black Widow (Scarlett Johansson). The story opens in 1995 in Ohio where an ordinary American family, a husband and wife and their two young girls, are dining together. Yet when forced to quickly flee their home, it is revealed the family are imposters and the parents, Melina (Rachel Weisz) and Alexei (David Harbour), are Russian spies! Now grown up, Yelena (Florence Pugh), has remained a loyal Russian agent. However, her would-be sister, Natasha, evaded their evil overseer, Dreykov (Ray Winstone). Natasha became a martial arts expert, and, as one does, joined the Avengers in America. Dreykov controls his female agents, the Black Widows, through mind control technology. When Yelena is on a mission, she is sprayed with an antidote relinquishing her from Dreykov’s command. She reluctantly pairs with Natasha to find their parents and then locate Dreykov. However, the scars around their upbringing remain and they are pursued by an armoured foe, the blandly named Taskmaster, who is seeking to destroy the remaining antidotes.

Shortland’s stylistic imprint has previously employed painstaking realism to illustrate female repression at the hands of violent men. Lore (2012) dramatised a German family fleeing at the end of the Second World War. Berlin Syndrome (2017) depicted a woman kept prisoner in an apartment by her male captor. Though admittedly flawed, the grounded pursuit of her actors in these films with dizzying handheld camerawork underlined high verisimilitude and naturalism in her formal choices. Broad themes about control, female suppression, and liberation are present here too. However, Widow’s dedication to Marvel’s formula and subsequent toy sales undermines Shortland’s mature filmmaking instincts. The one glimpse of her Malick-esque touch emerges during the opening. A seemingly quiet American neighbourhood sees childhood memories breeze gently across impeccably green lawns and past empty swing sets. Otherwise, the aesthetic is derivative of video games and rival film franchises. It means the comic book aspirations dilute the realism once unique to Shortland’s oeuvre.

A poor first half suggests Shortland partly filmed Widow without a finished script. The action scenes violently collide with one another but without sweat-inducing tension levels. This physical and emotional distance is apparent in the early set pieces. Even accounting for comic book physicality, the action is weightless and absurd. For example, Alexei snipes while lying prone on the wing of a moving plane and the sisters sprint from their car after it tumbles down a flight of stairs. Meanwhile, the hand-to-hand fight scenes employ rapid cutting like a Bourne film as if desperately concealing the stunt doubles’ faces. Only a melee between the women in an apartment resembles Shortland’s trademark claustrophobia. True to modern spy films today, these action scenes are staged across multiple countries, including Morocco, Norway, and Budapest. Yet the accelerated pacing leaves no time for immersion or visual stimulation. The Scandinavian landscapes are briefly attractive but other scenes noticeably suffer from muddy colour grading. A belated escape from a snowbound Russian prison heavily borrows from the Call of Duty games as if conceding the video game aspirations. Evidently, Shortland had no say over the story’s climax either, which resorts to Marvel’s ‘fortress in the sky’ cliche. The technical shortcomings, including a bloated running time, would be somewhat forgivable with a less derivative finale. 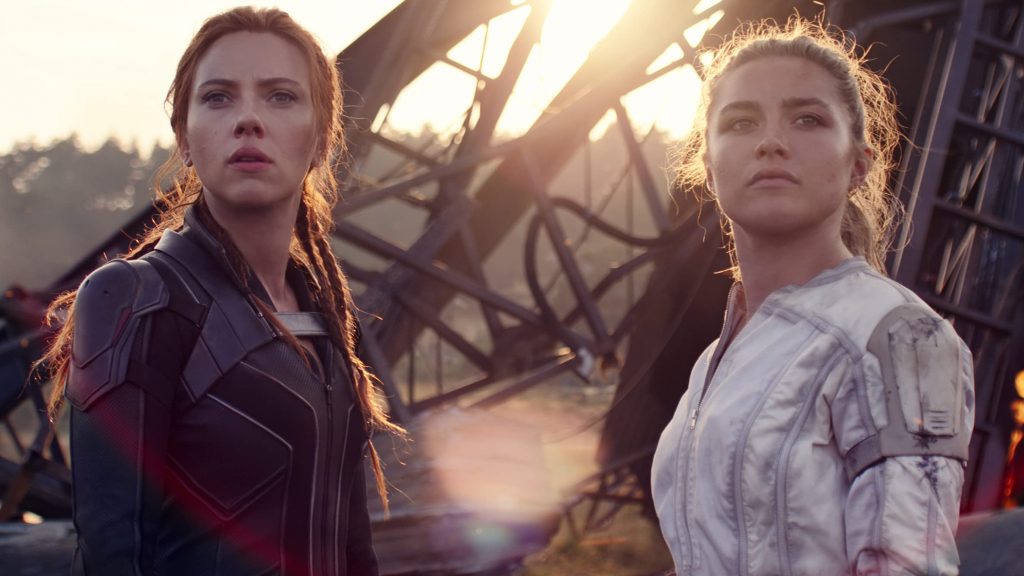 The sisters’ reunion in the middle act is a merciful oasis and infers the type of film Shortland wanted to make. The predictable but effective levity here proves sweet relief from the action. The best gags involve Yelena mocking Natasha’s signature pose from Iron Man 2 (2010) and gushing about buying her own clothing, a multi-pocketed vest, for the first time. These small character moments gently lean into exploring the through-line of freewill and individualism. The humorous quips and banter are also preferable to the otherwise sluggish exposition and pseudo-scientific nonsense. Some reflections are deeper than expected too. Natasha describes how her fake family shot three different holidays on the same day. The line infers the bittersweet artifice of her childhood and counters her confusing backstory. Though the dramatic potency is muted by talking about memories rather than showing them. Meanwhile, many of the same narrative staples, the fake family, Russian and American loyalty, and dangerous overseers are heavily pillaged from the spy series The Americans. It would have been a stronger, more singular film if Shortland traded some set pieces for original character moments.

The way the talented cast is utilised is imbalanced. Scarlett Johansson struggles to inject Natasha with personality besides her stern, resilient physicality. However, one aspect defining her character stronger than before is her guilt about a mission gone awry. The neat twist unexpectedly enforces the through-line of female liberation. With a very thick Russian accent, Florence Pugh threatens to run away with the film. Her comic timing is precise, and Widow benefits from stressing her discontent with Natasha’s defection. Though the Cold War-esque drama does little to dispel the predictable reinforcement of American values, such as family’s importance. Rachel Weisz is seen at the beginning but disappears until the final quarter. It is an enormous waste of a major talent who could have enriched the film. As Alexei, David Harbour’s comedic touches further counter the banal action.

A funny note is his Russian counterpart to Captain America called Red Guardian, complete with a tight spandex costume. Though it begs to ask why Alexei is presently a buffoon but resourceful and deadly in the prologue. The humour also threatens to infringe upon tougher emotions. For example, a difficult family reunion inside a farmhouse is perpetually interrupted by Alexei’s quips as if the sequence was extensively focus-tested and deemed too dark. Meanwhile, the baddies prolong Marvel’s blasé villain problem. Taskmaster is a Terminator‑like fighting machine, but the only interesting trait is who is under its helmet. The belated reveal is thankfully solid. Ray Winstone is largely absent until the end. His diabolical plan far outweighs his forgettable character. These issues stress the difficulty of balancing actors, plotting, and tone with Marvel’s prerequisites.

Watching and writing about Black Widow is highly conflicting. The first half is weak and invites little innovation to blockbusters and Marvel’s wanning formula. It provides few breathing spaces, and the action lacks the bruising physicality visible throughout great action cinema. The second half offers a slightly more intelligent thriller. With time away from the huge set pieces, it touches on interesting themes and hints at a deeper and funnier film. Its comic energy is largely attributable to Florence Pugh. Once again, she showcases her impressive versatility. The rest of Black Widow though is too uneven and generic to recommend. Evidently, talented filmmakers like Shortland are attempting to instil fresh ideas into the MCU but remain hamstrung by Feige’s blueprint. Telling a story about freewill and liberation is ironically littered with too many artistic compromises.

Summary: While it improves in the second half, Black Widow is too uneven and generic to recommend. Telling a story about freewill and liberation is ironically littered with too many artistic compromises.