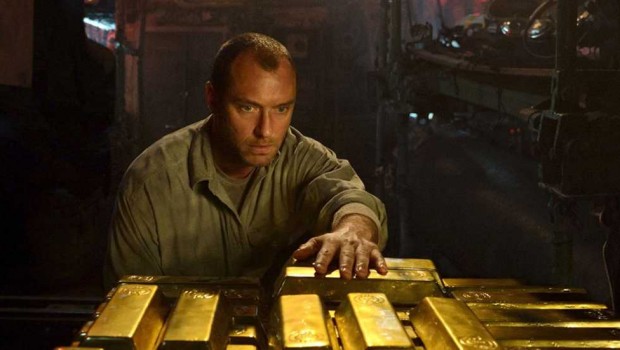 Jude Law’s new film Black Sea, directed by Kevin Macdonald, starts promisingly before its script and realism falter. Macdonald is a Scottish filmmaker, who started his career making documentaries including most famously Touching the Void. He has ventured into political dramas and adventure movies such as The Last King of Scotland, State of Play and The Eagle. Black Sea fuses a sociopolitical drama with a heist, man on a mission style film and also a cautionary story about greed. The director cites the greed aspect as being inspired by a film like John Huston’s Treasure of Sierra Madre (1948). Foremost, it is a submarine drama about the claustrophobia of men stranded together, which inevitably draw comparisons with the German film Das Boot (1981).

While writer Dennis Kelly has penned several episodes of the television show Utopia, this is his first feature film script. The most interesting component he uses is motivating the characters through class struggle and redundancy. In this contemporary story, Captain Robinson (Law) is a submarine captain who’s been made redundant by his salvaging company. He’s also frustrated by being separated from his wife and son, who left him because he was absent from them. He’s approached by his friends, some who haven’t worked in years, about an assignment. He’s invited to join Daniels (Scoot McNairy), who organises a meeting with a wealthy benefactor that is willing to fund a mission to locate some Nazi gold under the ocean. Robinson assembles a mixture of British and Russian crewmen to locate the treasure, assuring them that every man will receive an equal share. Boarding a creaking, old submarine and the social inequality is felt within the vessel as the tempers flare over bringing in the gold. 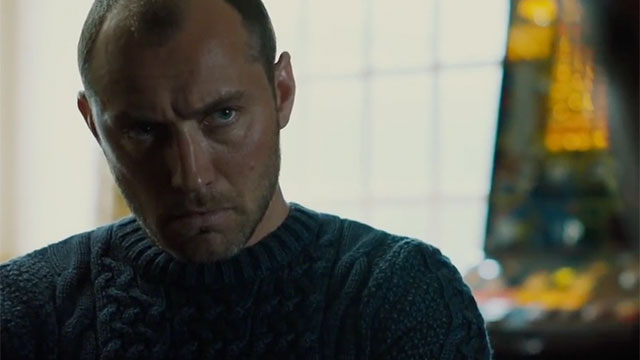 One technical miscalculation is how Kevin MacDonald has photographed the early scenes, prior to entering the submarine. The film’s aesthetic flaw is shooting them in extensive close-up shots, paired with tight framing and grey colour tones, which is supposed to impose a fly-on-the-wall brand of realism. However, these are techniques which could have been reserved strictly for the submarine scenes to enhance the sense of claustrophobia and the tension levels. Some of the film was shot on-board a real submarine called the Black Widow using small cameras, while the rest of the movie was filmed on a set and also a massive water tank. Except for the odd jolt, the tight spaces of the submarine aren’t as palpable or effective as you might be anticipating or dreading from a submarine drama. 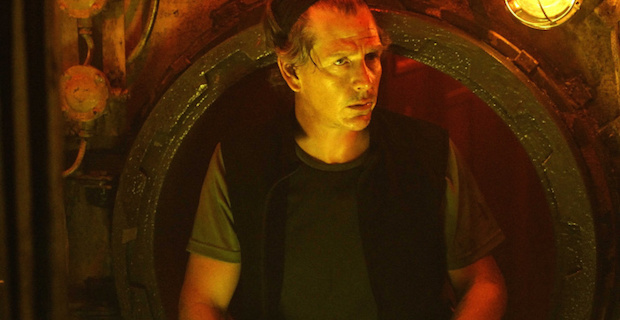 The film also struggles with character development and upholding the realism of its situations and narrative. Jude Law’s solid leading presence conveys the aggression and determination of a character trying to escape his working class boundaries, sometimes at the expense of the crew. With his head shaved, it is a physically and emotionally tense performance but the arc feels uncertain about whether he is growing greedy and mad or prolonging his working class resilience by continuing the mission. Late in the film he risks lives to bring in the gold but at the very end he has a late change in his motives and attitudes.  With a large number of crewmen, there are no women in the film besides brief flashes of Robinson’s wife, it is hard to develop the side characters in much detail. Instead, they only represent archetypes or emotions like cowardice, the loose cannon (Ben Mendelsohn’s thick Australian accent stands out too sharply in this role), and inexperience. The youngest crew member is Tobin (Bobby Schofield), a young man who has a pregnant girlfriend and is bullied by the other sailors, while also drawing Robinson’s sympathies as he thinks about his own estranged son. Sometimes the story feels indecisive about how to treat these characters, switching directions between a horror style elimination game as bodies pile up (the director cited Alien as a comparison) and taking them on blockbuster style adventures when the crew board the abandoned ship containing the gold. 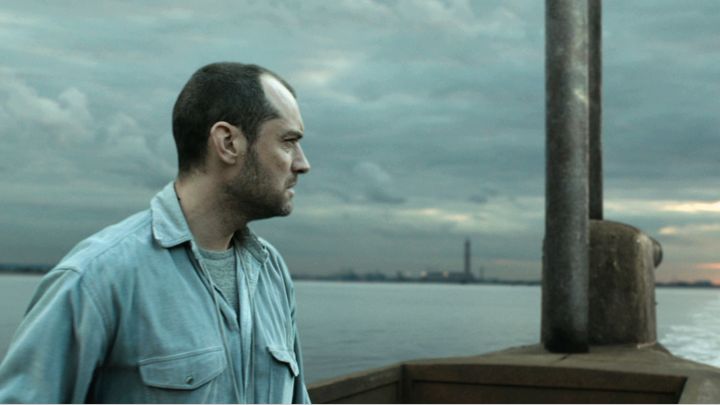 Believability was going to be problematic when combining social realism with a fictitious premise like assembling a team to find Nazi gold. The realism and attention to detail feels most lacking in the diving scenes. A small group of the men exit the submarine and dive out to find the Nazi ship. They reach a wall and they believe they’re in the wrong area. With a swipe of the hand, a character erases the dust off the wall to reveal the swastika on the side of the Nazi ship for which they were searching. The camera then retracts to reveal the enormous war ship. Were the characters temporarily blind to miss this? In this sequence, not only are the crew allowed to dive without a mini submarine but they also have technology which allows them to talk under water. How handy and fortunate given the creaking state of their submarine. There are also jumps in the editing and continuity. After find the gold openly scattered in the ship, not locked away, the film jumps forward to the gold being neatly stacked up on a trolley under the water. How did they have enough air to move all that gold? The worst lapse in believability is a rushed plot twist, which explains in implausible terms how Robinson’s working class friend was connected to a wealthy benefactor. It’s a stupid and nonsensical twist, compounded by the film’s sentimental ending and defiance of the weight of gold. While Black Sea starts promisingly with its sociopolitical topics and Jude Law’s effective work as the captain, the film disappoints due to its lack of tension and gaffes in realism, which should have been airtight.

Summary: The film disappoints due to its lack of tension and gaffes in realism, which should have been airtight.