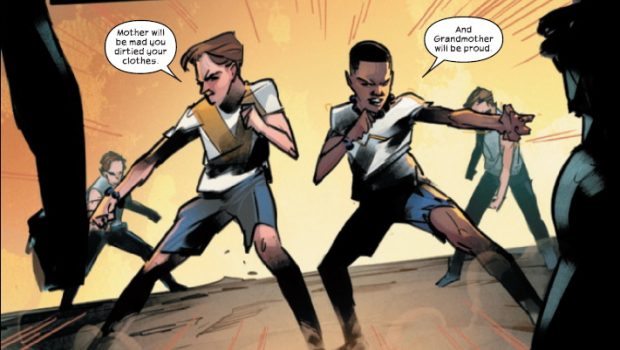 Summary: A retelling of the origin story of Black Panther. Well worth having a look at if you have not heard much about this character before.

In this retelling of the origin story of Black Panther, T’Challa and his adopted brother Henry have a trip to apartheid era South Africa and confronting that the outside world is not the same as Wakanda. The first delegation into the country from the UN is replaced by criminals and tragedy strikes.

I had not really heard that much about the Black Panther before the movie came out. I had heard bits and pieces and it does make sense they are going more into the origin story now to reach more people who have not heard of it before.

Having the scenes in South Africa does make sense and shows the social commentary the series and the writer is a Nigerian American as Marvel has been promoting a lot of people of colour writing for the characters of their own race these days.

It is an interesting story even if you do not include this aspect so if you are a fan of the Black Panther or just want to know more about this character I would recommend it.