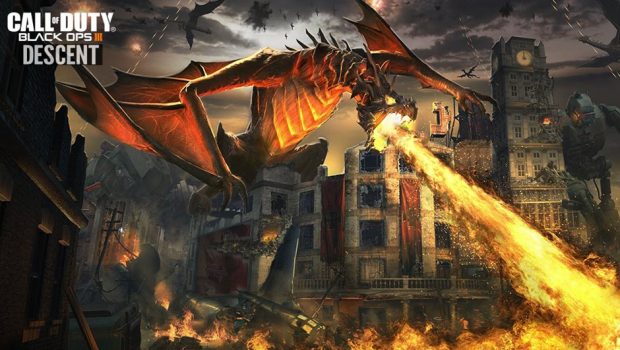 NOW AVAILABLE ON PLAYSTATION 4, XBOX ONE AND PC

The third DLC pack for Call of Duty: Black Ops III, Descent is now available on PlayStation 4, Xbox One and PC, transporting players to four new multiplayer maps that span the globe and an all-new Zombies experience, Gorod Krovi.

In the newest, twisted chapter of the Origins Zombies experience, Gorod Krovi takes players to an alternate-timeline of Stalingrad in which they must face-off against a swarm of mechanised zombie soldiers and avoid hell-fire from aerial dragon assaults, all in the midst of a raging battle within the remnants of Nikolai’s motherland.  Gorod Krovi delivers a harrowing Zombies experience, filled with horrifying new enemies, exciting new gameplay mechanics and an epic set of undead-annihilating weapons.

*Descent DLC content not available on PS3 or Xbox 360.