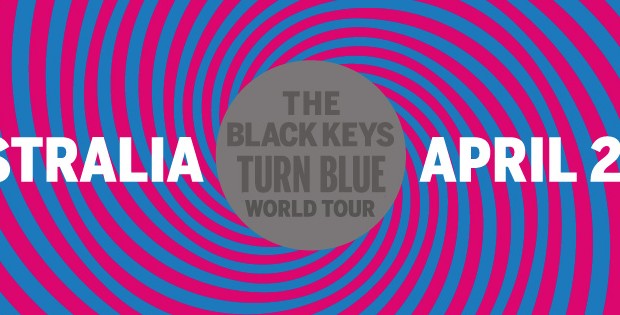 Love Police Touring are pleased to announce the Grammy-winning duo of Dan Auerbach & Patrick Carney, known as The Black Keys, will return to Brisbane as a part of their Turn Blue World Tour. The band will kick off the Australian leg of the tour at the Riverstage on Thursday 2 April, 2015 with special guests Band of Skulls and Bad//Dreems, making this one rockin’ line up to get the Easter long weekend started!

This will be the 8th tour to Australia for The Black Keys who are currently receiving stellar reviews on the North American leg of their epic Turn Blue World Tour.

“So long as the Black Keys are on the road, there’s hope for the future of guitar-based rock ‘n’ roll” – Ottawa Citizen

“…their oft-rudimentary thud is sexy and sweaty and impossible to resist – try not to bop along to ‘Gold on the Ceiling,’ ‘Dead and Gone,’ and ‘Lonely Boy,’ especially live, where they sound raw and direct.” – The Grand Rapids Press

“…proof that though the venue has changed, the Keys aren’t too far removed from those early basement explorations” – Columbus Alive

The band’s dynamic set has been described further by Ottawa Citizen as a “sweet ride” featuring something for everyone, including all the big hits, new tracks from Turn Blue plus a selection from every release of their back-catalogue. You might even get the odd cover thrown in as well. The UK’s Guardian said of the band’s Glastonbury 2014 performance, “The Black Keys have got better as they’ve got bigger, revealing a talent for fiendishly catchy classic rock.”

Check out some of the highlights from the North American leg of the Turn Blue World Tour along with The Black Keys talking about the Turn Blue touring experience below:

The tour celebrates the duo’s highly acclaimed new album, Turn Blue, which debuted at # 1 in the US and Australia.  This is the highest chart debut yet for the band, whose previous album, El Camino, debuted at # 2 in the US and # 7 in Australia in 2011.  It is also the first # 1 album for The Black Keys’ worldwide label, Nonesuch Records, which is currently celebrating its 50th anniversary.  Additionally, Turn Blue is the band’s highest charting album to date internationally, also debuting at # 1 in Canada, # 2 in the UK, New Zealand and Croatia, # 3 in Ireland and Hungary, # 4 in France and Switzerland, # 5 in Austria, Denmark and Holland, and top ten in Germany, Italy, Belgium, Finland, Greece, Spain and Portugal.   This is the eighth full-length album from the duo, following 2011’s critically and commercially acclaimed El Camino, which is now certified RIAA Platinum.  Internationally, El Camino is Gold in Belgium, Spain, Italy and Holland; Platinum in Ireland, France and the UK; double Platinum in Australia and New Zealand; and triple Platinum in Canada.  The record also resulted in three awards at the 55th Annual Grammy Awards – Best Rock Performance, Best Rock Song, and Best Rock Album.  The band now has a total of six Grammy Awards including three in 2010 for their breakout, RIAA Platinum album, Brothers.

Turn Blue was recorded at Sunset Sound in L.A. during the summer of 2013 with additional recording done at the Key Club in Benton Harbor, MI and Auerbach’s Easy Eye Sound in Nashville in early 2014.  Of the new album, the band says Turn Blue could refer to: A: Suffocation B: Sadness C: Numbness from extreme cold D: A Cleveland late night TV host from the 1960s named Ghoulardi E: All of the above Carney also adds, “We are always trying to push ourselves when we make a record – not repeat our previous work but not abandon it either.  On this record, we let the songs breathe and explored moods, textures and sounds.  We’re excited for the world to hear Turn Blue.”

UK trio Band of Skulls have spent years gigging and grafting and slowly building their arsenal into a formidable sonic weapon. They have proven with their current album “Himalayan” they can afford to aim big because, with ten years leading up to it, it’s earned the right to. They will join The Black Keys at their already announced headline shows in Perth & Adelaide in addition to Brisbane and Bluesfest.

Touted as one of the “Artists to watch in 2014”, Australia’s own Bad//Dreems will tag team with Band of Skulls following the Brisbane show and will open for The Black Keys at their Sydney & Melbourne shows. Both special guests are already announced on The Black Keys Rolling Green events at wineries in Victoria’s Yarra Valley and the Hunter Valley New South Wales.