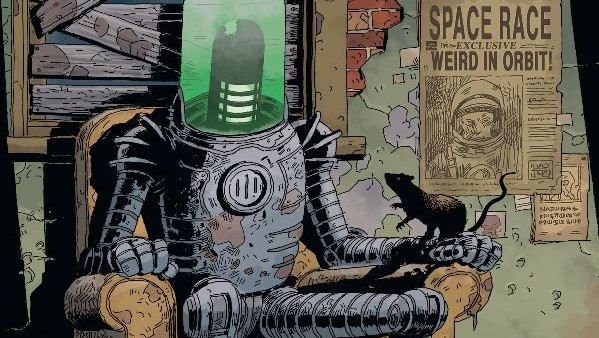 Talky-Walky makes contact with Lucy, Abe gets in a fight with some hooligans over a comic and Mark Markz embarks on a revenge quest. The Black Hammer team is at a crisis, but most of them don’t even know it!

This issue begins on a dark and stormy night in Spiral City. Lucy comes face-to-face with Talky-Walky for the first time in this strange new reality. Talky has been trying to contact Lucy for some time now, wishing to reveal the truth of the multiverse accident and reality shift that rewrote history. Talky believes that Lucy is the key to their plight and the only one who will unlock the mystery surrounding this unfortunate accident. Unfortunately, Lucy thinks this is all one sick joke, and storms out of the room, leaving Talky alone and dismayed. This strange encounter lingers in Lucy’s mind, niggling away at her thoughts, forcing her to question the world around her and the confronting claims that Talky made.

Elsewhere in Spiral City, Abe knocks off work after doing the night shift at the museum. He encounters some young hooligans on the train, who poke fun at him and tear up the comic he was reading. Naturally, Abe reacts badly and threatens the punks, claiming that he used to be a boxing champion. Sadly, Abe’s age has never been more apparent when he is knocked down after a few punches. A sad and tragic scene to watch.

Meanwhile, on Mars Mark Markz arrives back at his cave to discover that his ship has been destroyed and his lover mortally wounded. This heartless and cruel attack spurs Mark to embark on a revenge quest, taking on the entire tribe of martian warriors. He is fuelled with rage and anger, and is a terrible and formidable foe.

Righto, another thought-provoking and somewhat sad issue of Black Hammer. Mark Markz story really is tragic, and it seems that no matter what reality he lives in, he is destined to be heartbroken and alone. I’m curious to see what Mark will do from this point onwards, as I can’t help but feel that fate will take him to Earth. He is meant to be there with his fellow heroes. Abe’s story was also distressing and difficult to watch, especially when he was being tormented and beaten by the youths. These guys really are feeling like tragic characters, unable to escape their wretched fate.

I’m also intrigued with what is going on with some of the other Black Hammer characters. We know what happened to Colonel Weird, but what about Madame Dragonfly? I have questions buzzing around in my head, but what I’m curious the most about is whether Dragonfly is stuck in the same reality as Lucy and the others. Was she dragged into this, or is this place something that she created once again? What if her story changed as well and she isn’t Madame Dragonfly anymore, but a young mother again, nursing her child that didn’t die? Ahh, theories and speculations. We’ll just have to wait and find out as the story progresses.

I’m really appreciating Dean Ormston’s moody and atmospheric art, especially for these darker and more ominous issues. I especially love how Ormston frames certain scenes with heavy inking to give a lovely impression of light and shadow. It’s very effective in helping to create interesting perspectives and framed scenes, along with fostering an atmospheric sense of unease and apprehension. I also liked how we spent a portion of this issue on Mars, exploring its bleak landscape and strange alien civilisation. Seeing Mark in action was also a treat, especially fuelled by so much anger and heartache. Like I mentioned earlier, this is a pretty emotional issue, with some sad moments unfolding for our heroes. Ormston does a wonderful job translating these emotions on the page, allowing for us to fully grasp and feel what these characters are experiencing.

Overall, I liked this issue, and I’m enjoying the direction that the story is taking. 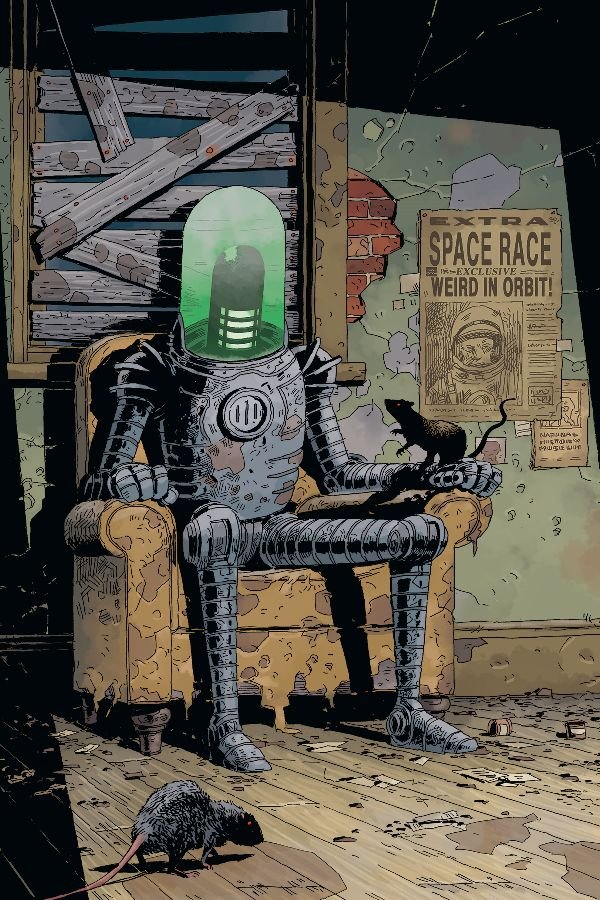