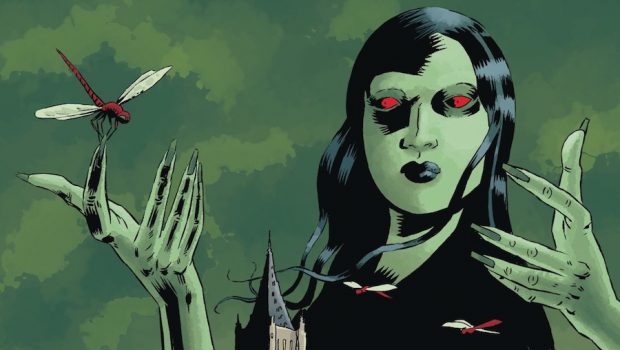 Summary: Black Hammer Age of Doom #12 is a perfect wrap!

Normally I hate endings like this. There really is the question of what the hell the whole point was. The heroes break free of their “cage” (in this case the farm), fight the good fight, and then wind up back in their cage, exactly where they were. It’s like watching a 4-part serial of the old Doctor Who. The third episode almost always followed that format to a T. In this rare occasion however, the end result is not the same thing as the beginning.

The heroes have finally broken free of the farm and of their mundane city lives and confront Madame Dragonfly. She plays coy at first, claiming that she does not know any of them, but finally they force her hand and she explodes in anger… which has the unfortunate side effect of briefly showing the Cabin of Horrors. Now exposed, she unloads a torrent of anger upon our heroes. All she wanted was a normal life, one as a soccer mom with kids. Unfortunately, the group has ruined that chance at happiness.

When asked why she once again has gone through such an elaborate charade, she claims that she loves them. Even after all the manipulation she has been the cause of, Madame Dragonfly is just like a misguided parent wanting the best for her children. That and the Anti-god is going to destroy literally everything everywhere.

Realizing there is a way to stop Anti-God, Hammer suggests that they all go back to the farm. Of course, everyone is totally against this… except Abraham. He just wants his Tammy back. Dragonfly is coaxed into doing it after Slam makes sure she knows that THEY are her family. Everyone is in agreement, but not Gail. She wants no part in this, even though she knows that her untransformed body is a senile old woman…AND THAT IS WHERE HE MAKES HIS ENTRANCE.

Sherlock Frankenstein makes his return to the series and I couldn’t be happier. He had the best mini-series in the Black Hammer Universe and it really is a joy to see him again. Gail is convinced and through the Hammer’s magic, the spell is re-enacted.

We wind up back in the farm’s world. Abe and Tammy are happily together, Mark and Paul Quinn (the priest) are together. Gail is their adopted daughter and Sherlock is now a kid that is Gail’s age. Gail reluctantly plays with Sherlock but they are soooooo going to end up together. The only one who got the short end of the stick is Talkie, who becomes a toy robot.

We then zoom out and the farm seems to exist inside a Dragonfly’s eye., who I assume is the Madame. The Dragonfly is resting peacefully on Hammer’s finger. All is well in the real world.

The day is saved and everybody gets a happy ending. The characterization throughout these  books is tremendous, with well thought out characters and a hell of a world that Jeff Lemire built. It’s not the end (I think the Quantum League is still going on), but I have a feeling it’s the end for these characters (not counting Hammer.) It’s been a wonderful ride and this book definitely gets 5 stars. 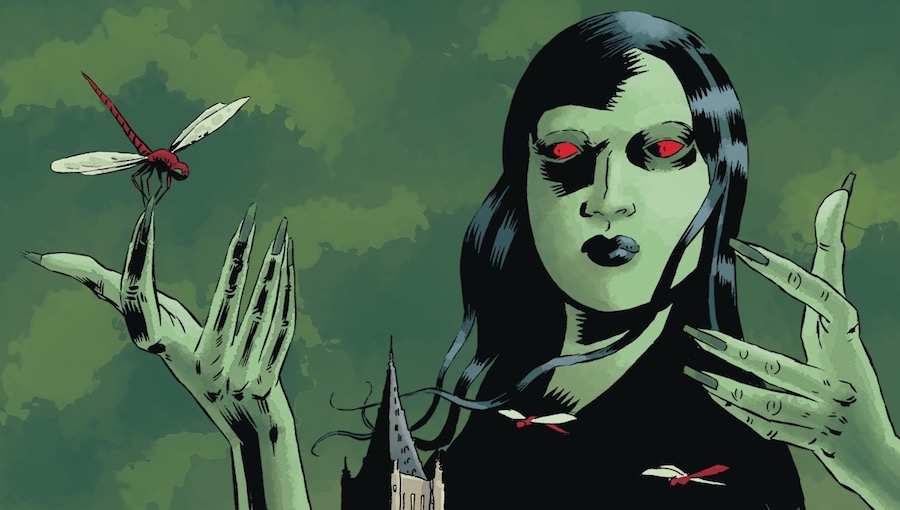 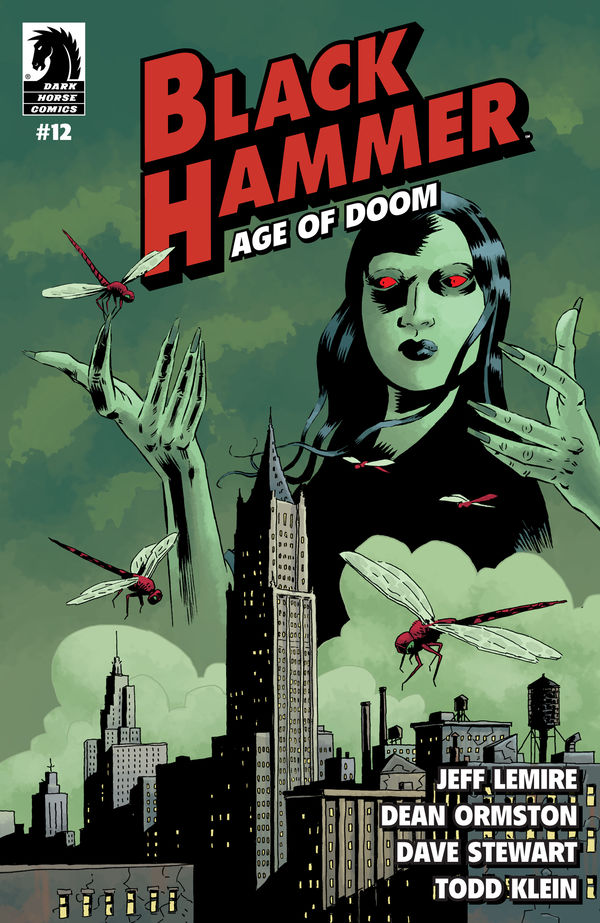 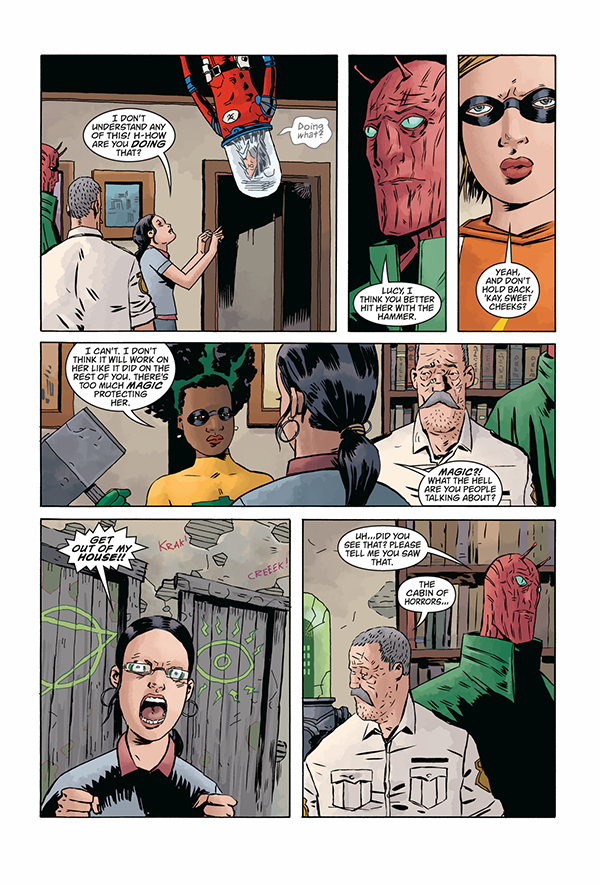 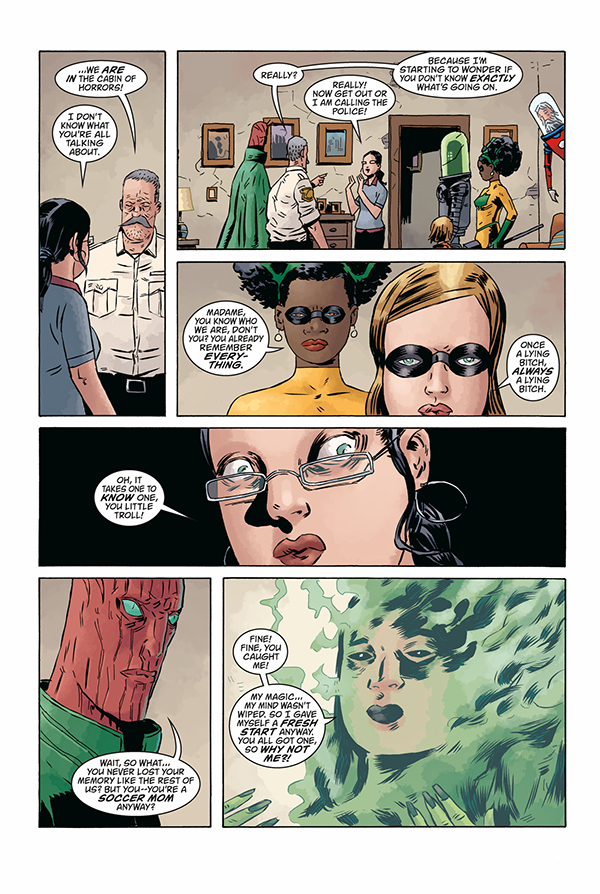 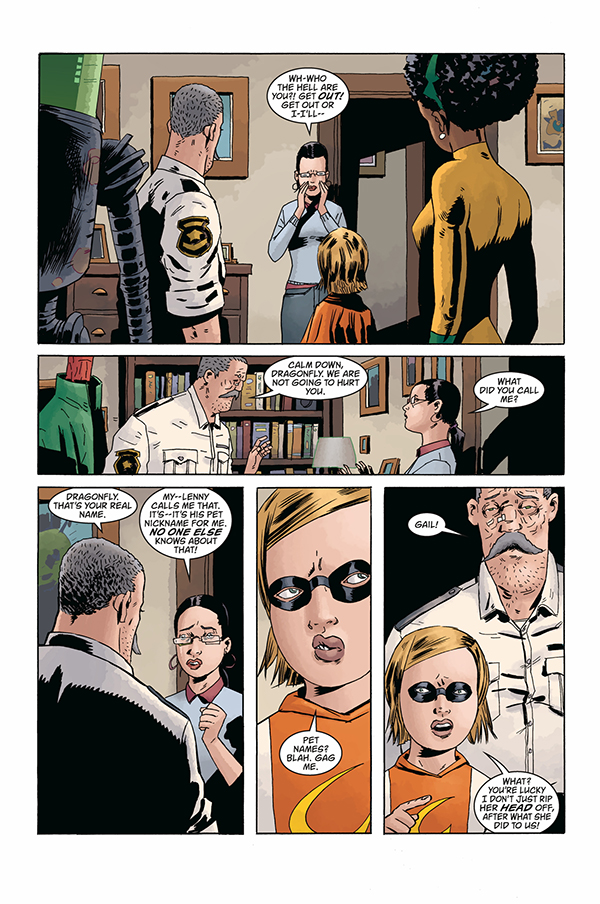