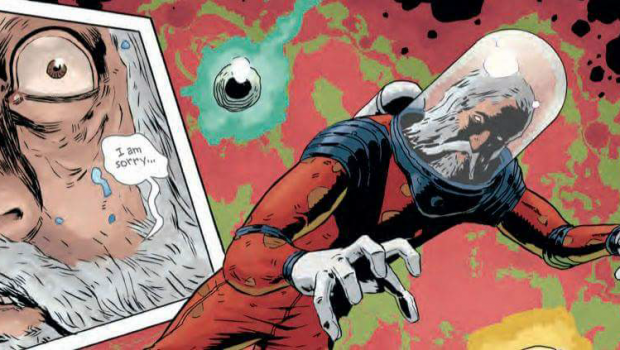 Summary: Black Hammer #5 delivers us another intriguing issue to this mysterious story.

In Black Hammer #5, we venture into the mysterious and mind-bending Parra-Zone with Colonel Weird. Being filled with regret and possessing a tormented mind, we finally learn about Weird’s origin story and the series of events that have led him to become the most unhinged character in Black Hammer. 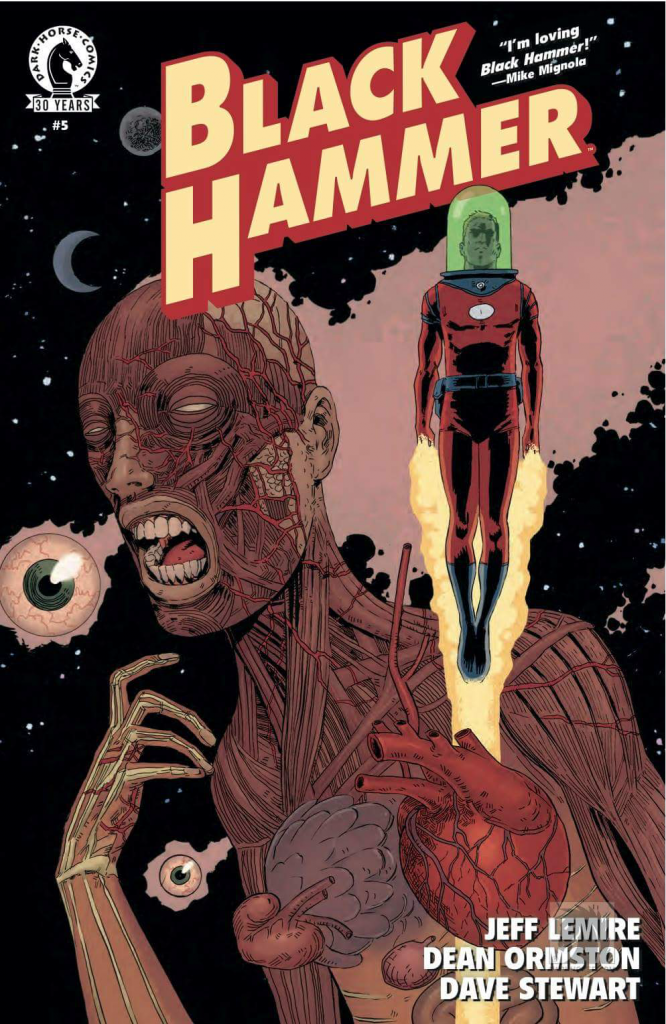 This issue begins in 1955, where we see a young Randall Weird, a.k.a. Col.Weird, exploring an exotic alien world with his ever-loyal companion, Talky-Walky. After stumbling on an alien cave drawing, depicting an unknown star chart, Weird decides to investigate where exactly this map leads to. Mysterious star charts that lead to multidimensional space can only result in hectic space adventures of a bizarre and zany nature and that’s exactly what we see happen here. It is at this point that we are introduced to the Parra-Zone and a series of disjointed events that reveal to us the tormented exsistence that Weird has had to pay for venturing too far. Once Weird enters the Parra-Zone, it’s like he becomes one with it, unable to fully rid himself of its unexplained mysteries and torments. Weird traverses the Parra-Zone, like some kind of silent spectator, quietly observing events and interactions through doorways that he is unable to enter or interact with. Not only do we learn more about Weird’s history of poor decisions and regrets but we also get to see some interesting scenes focusing on the other suerheroes as well. More is also revealed about the devastating event that occured in Spiral City, which resuted in the death of Black Hammer and sent all of our heroes into exile. 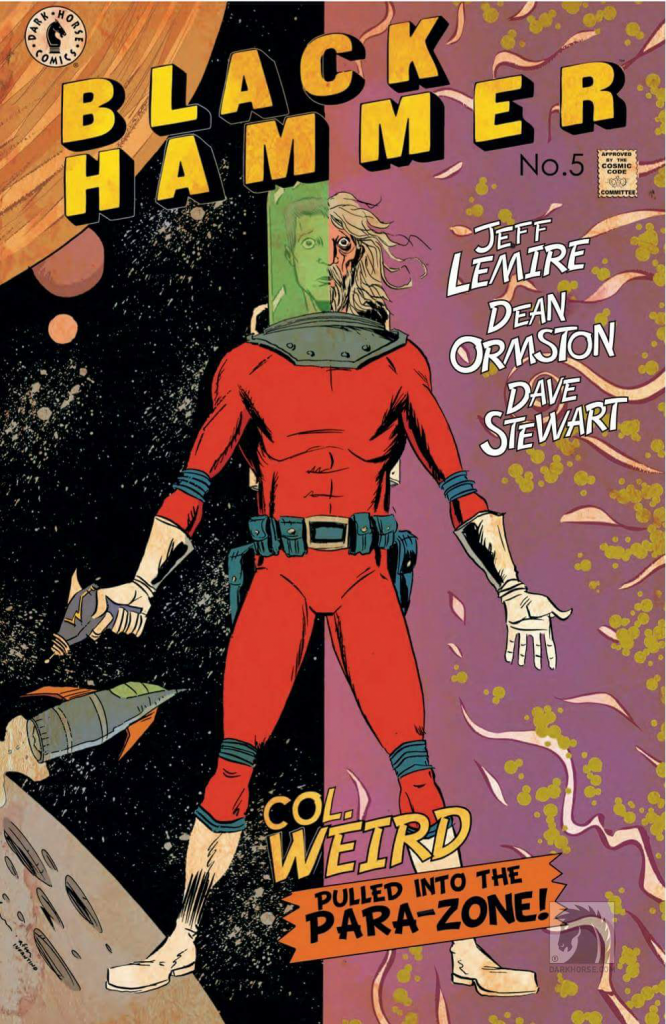 I really enjoy this kind of storytelling, it’s fragmented and broken and feels like a reflection Weird’s chaotic mind. This is a jumble of the past and present, as we jump back and forth through a disjointed timeline of events. It all works and flows seamlessly, conveying a sad and tragic story of a man made demented from reliving his past over and over again. Jeff Lemire has shed some light on this mysterious character, humanising him and revealing his curious young mind, which was impulsive and quick to make a brash decision which he pays the ultimate price for.  Col. Weird’s story is reminiscent of the Golden Age of Science Fiction and it really have a very pulp-like, space adventure quality to it, which I feel fits really well with the other origin stories. I also enjoy Lemire’s ability to inject those small moments where Weird appears almost grounded and sane. These moments are few and far between and they contrast with Weird’s general whacky and unpredictable nature. I’ve also noticed a reoccurring theme of trauma and heartache with these characters. Prior to the events of Spiral City, they have all experienced some sort of trauma or distressing personal incident. They are all damaged individuals with different stories to be told, each unique to one another but somehow still connected. I think this is a clever way of creating a sense of unity among these superheroes, as they have all experienced some sort of heartache and pain. 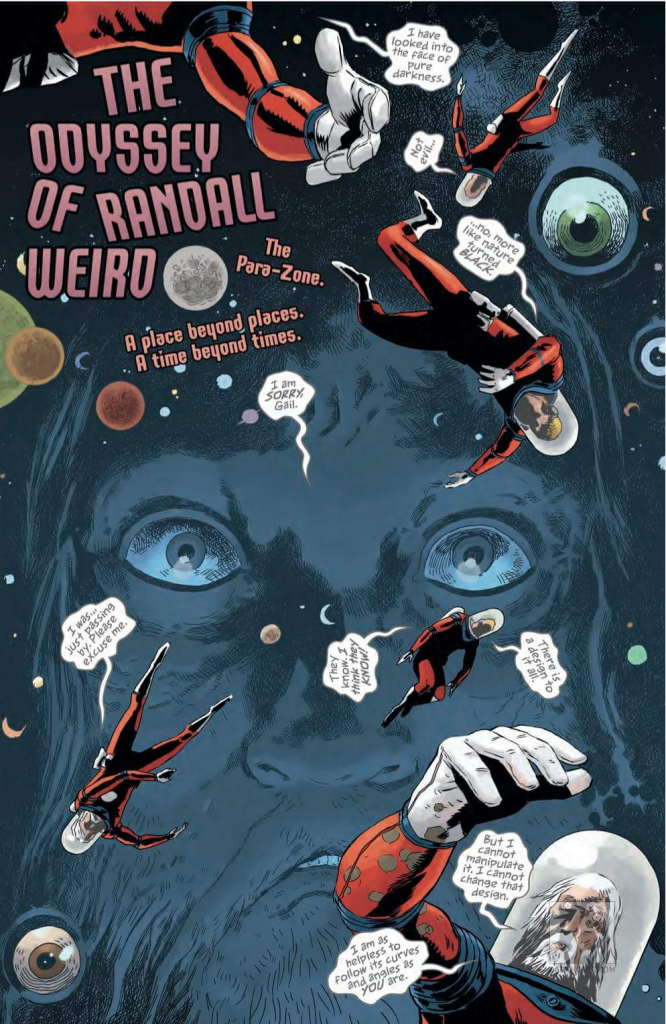 Dean Ormston’s art does a great job at capturing Weird’s tormented mental state. This is reflected in the psychedelic and mind-altering Parra-Zone. Ormstons’s Parra-Zone reminded me of Steve Ditko’s surreal and psychedelic dimensions in Dr Strange, with a kaleidoscope of unusual images and shapes. This bizarre multiverse is a place that has warped and damaged Weird’s mind and Ormston conveys those strange moments so perfectly. They are both terrible and curious to look at, as we see somewhat zany imagery juxtaosed alongside some very distressing moments. Ormston also does a great job at portraying Weird’s trauma through his twisted face. You get a real sense of his ever-present fear and anxiety and toll that this has taken on him. Colourist, Dave Stewart, helps to reinforce the fragmented tone surrounding Weird by using an almost haze-like filter with the colours. You can see that the colours are meant to be bright and vibrant but this effect has tarnished them, making them appear pale and faded. 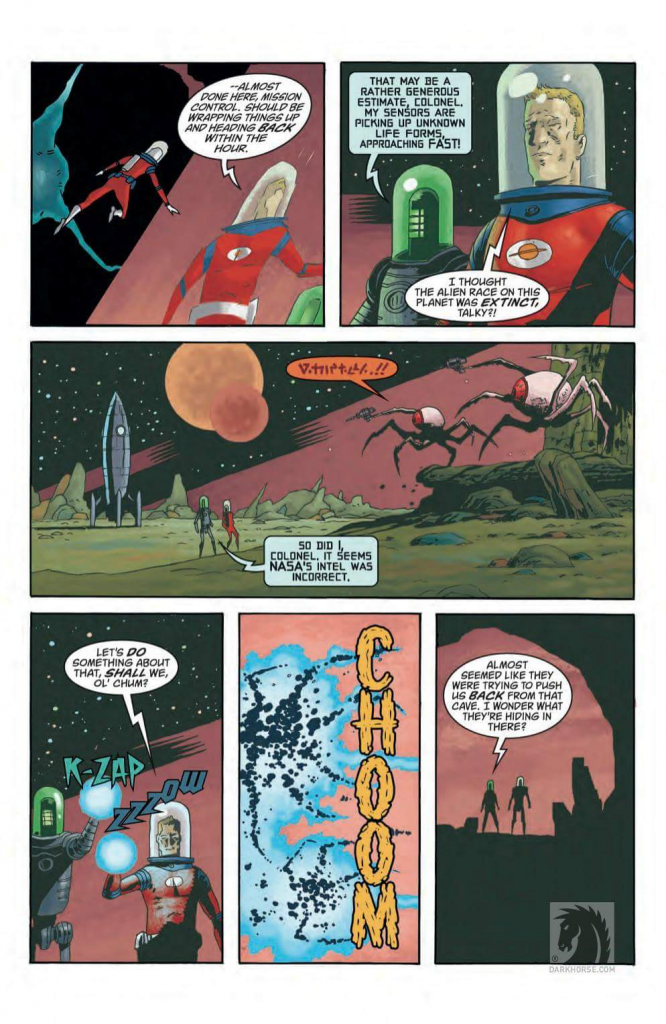 Black Hammer #5 delivers another intriguing issue to this mysterious story. By this point, I feel like I’m really starting to get to know these superheroes, as I learn about their past and the things that have happened to them. I’m curious to see where this is all leading to and learning more about these weird and wonderful characters, stuck in this strange and twisted world.