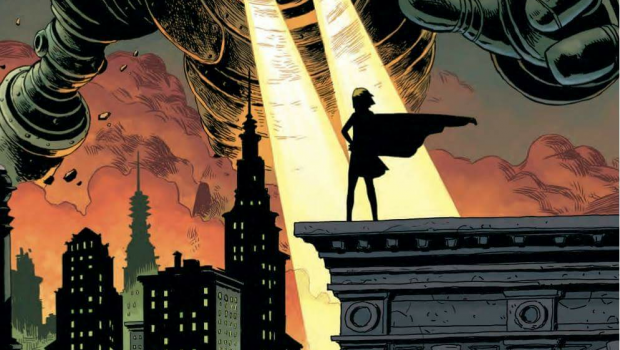 Summary: We learn how having superpowers may be less of a gift and more of a curse.

A unique and compelling read

Black Hammer #2 delves into the origin story of Golden Gail and how she inherited her powers and became America’s superpowered sweetheart. This is an interesting issue that reveals a lot about Gail and the kind of person she is. It exposes her vulnerabilities, inner turmoils and explores the ever-present conflict she battles with over being an old woman stuck in a child’s body. We explore scenes that travel back and forth from the past and present and we learn how having superpowers may be less of a gift and more of a curse. 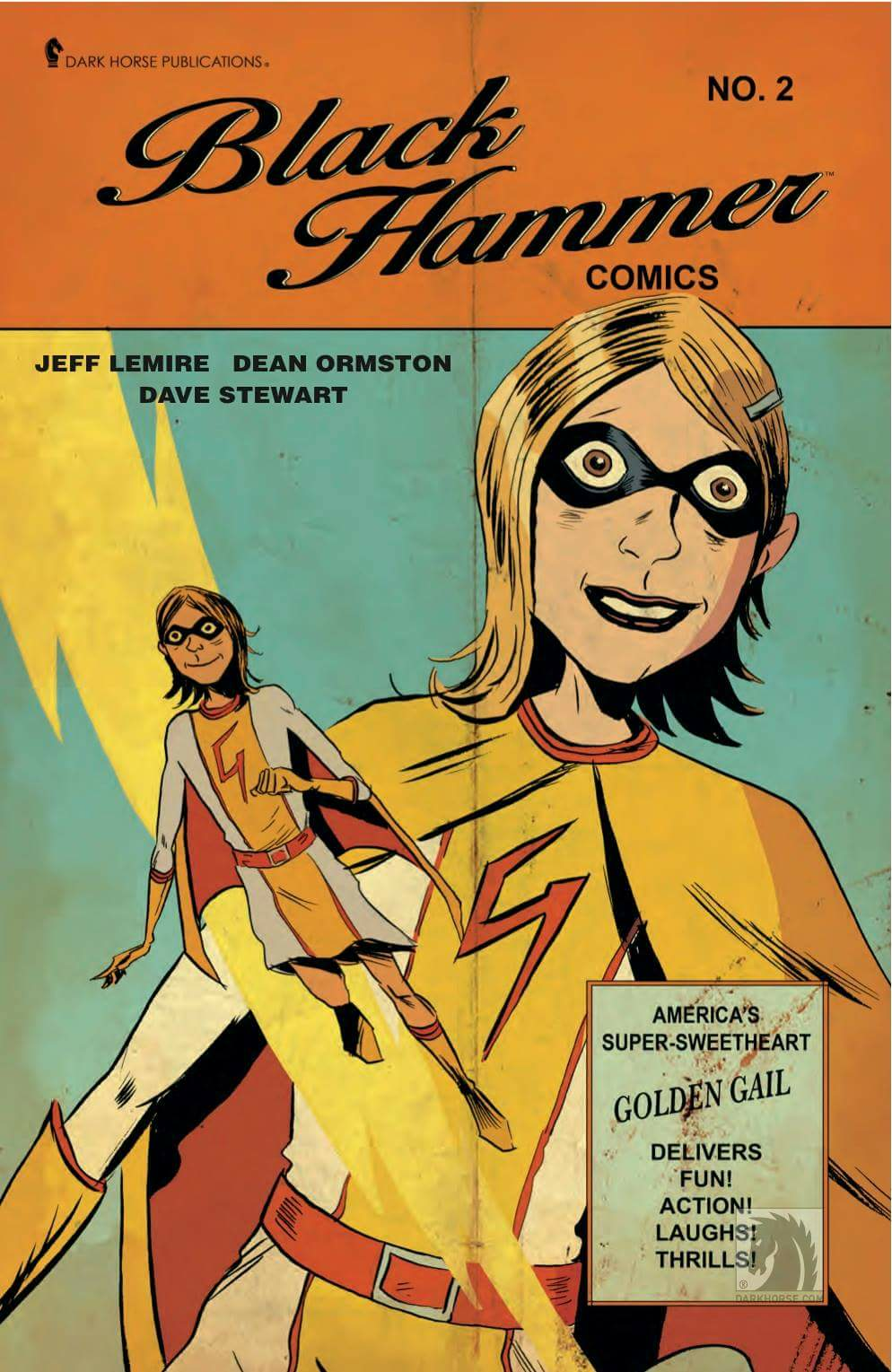 This issue begins in Spiral City and introduces The Curse of Zafram! A mysterious title placed over a very cinematic scene, that instantly transports us to another time.  We are back during the Golden Age of heroes and already you can tell that these opening pages are laying the foundations for a compelling origin story. This story is about Gail and we not only learn about the origins of her inherited powers but we also get to explore more of her inner conflicts and how they have and continue to be a huge burden to her. We also get to see more of the other imprisoned superheroes and witness some interesting interactions and curious dialogues. Madame Dragonfly is particularly intriguing to me, as I still have so many unanswered questions about her. Who is she? Why does she isolate herself? And why does Gail despise her so much?

Jeff Lemire really does a great job at revealing on a very personal level the complexities of these characters. Even though they are superheroes, their reactions and interactions with one another feel very real and organic. The ongoing narrative about Gail being forced to live as a young child in order to blend in and go unnoticed is an interesting and sad one. She really is troubled and hates her life and I can honestly understand why. It would be like living a nightmare that you can’t escape from. Lemire has made these characters very relatable and I’m instantly drawn into their individual stories and conflicts. Already by the second issue, I care about them and I applaud Lemire for that. Also the ever-present sense of mystery that we get from this eerie and unexplained town is also excellent. The heroes have no idea where they are or even why they are there and cannot leave. There really is an underlying sense of dread and foreboding about this Stephen King-like town and I love how it’s a perplexing enigma not only to us but to them as well. 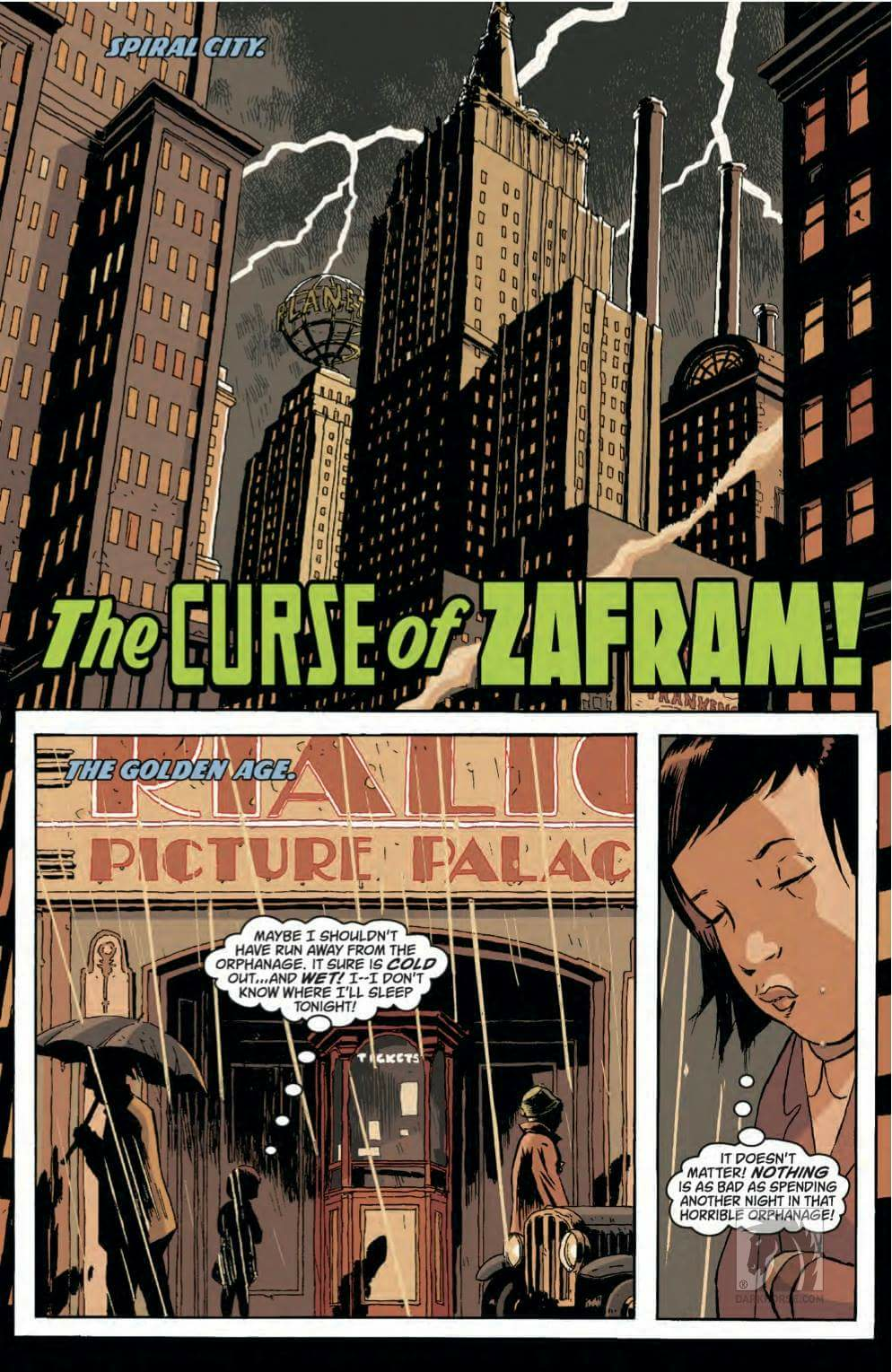 Dean Ormston’s art is once again on point. He does an excellent job at bringing these characters to life in an interesting and original way. I also enjoy the contrast that we get to see between the bleakness of the town juxtaposed alongside the very expansive Spiral City. Ormston has done a great job at creating a very trapped and claustrophobic feeling for those scenes set in the small country town. There is a bleak repetitiveness there and a heightened sense of stale decay and this really just amps up that unsettling tone. The scenes set in Spiral City have a very pulp-like look about them and this really does make them feel like they are set in a different time. The scenes in Spiral City also really feel like we are experiencing them from a child’s perspective. The scale of everything is large and Gail appears to be engulfed by her surroundings. I should also mention Dave Stewart’s colouring, as it really cements the overall tone of the story. He uses muted and dull colours for the scenes set on the farm and in the town, which once again heightening that sense of bleakness. This contrasts with his use of more vibrant colours for some of the flashback scenes. I found that these panels really do pop! 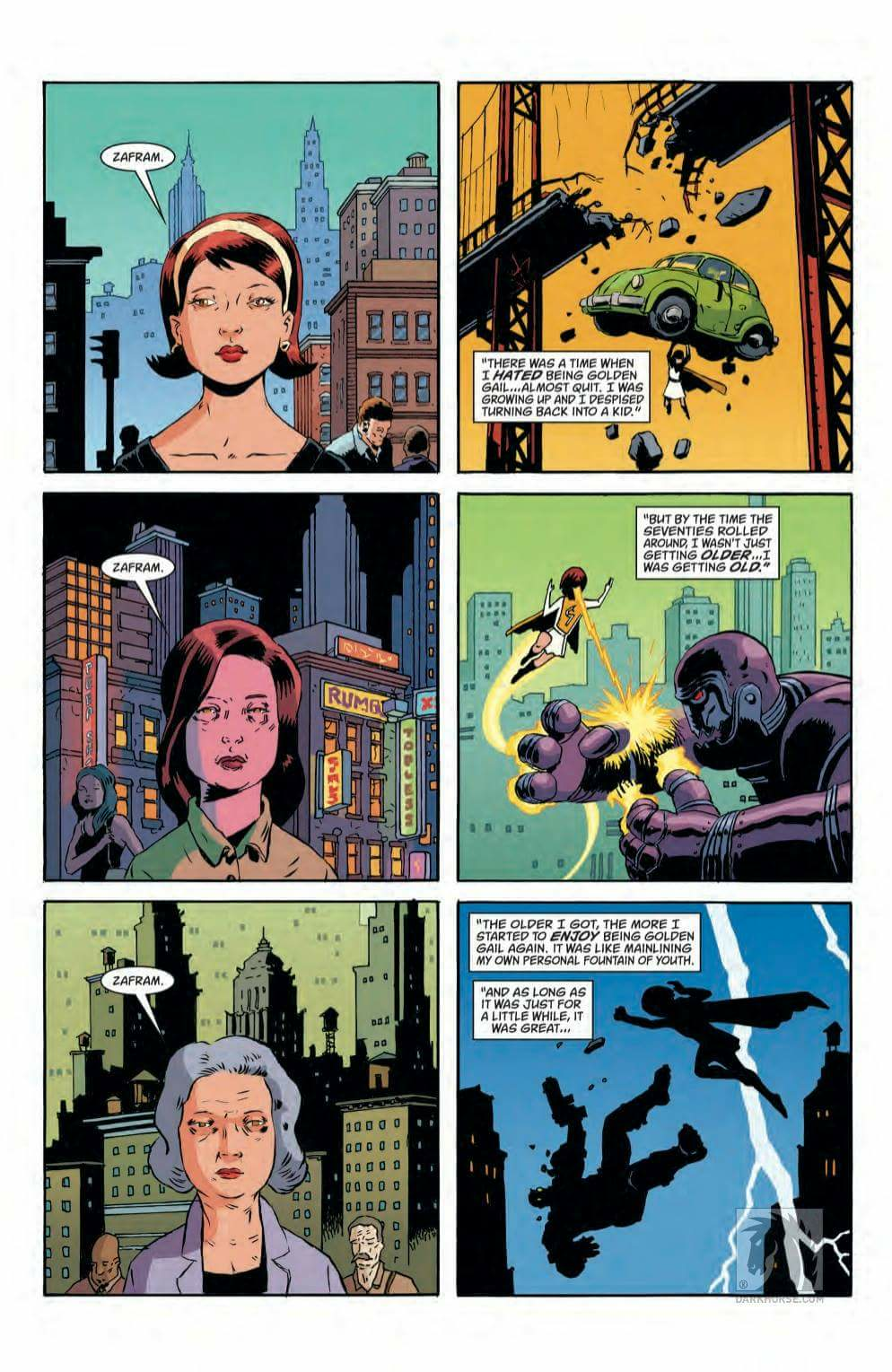 Black Hammer #2 really does deliver and I’m liking where it is headed. I already care about the characters and empathise with them and the hopeless situation that they are stuck in. I want to know more about them and learn more about the mystery behind what happened during that cataclysmic event in Spiral City that forced them into exile and changed all of their lives forever. Everything is shrouded in mystery and I just love the feeling that we are piecing together a damaged puzzle. It’s gritty, exciting and I’m looking forward to reading the next issue.