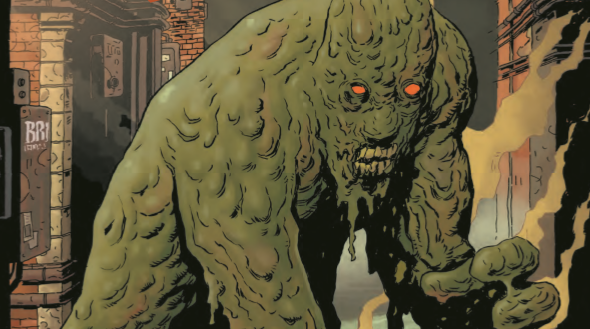 Summary: An engaging and compelling issue with some curious plot developments.

There is something a little odd about the sleepy town of Rockwood, the home to Spiral City’s finest superheroes. Abraham Slam reflects on his past, coming to terms with the fact that he is an ageing superhero. Mark Markz experiences an awkward misunderstanding that leaves him with a broken heart, and Tammy deals with an angry and embittered ex, who only wants to stir trouble when trouble is not wanted. 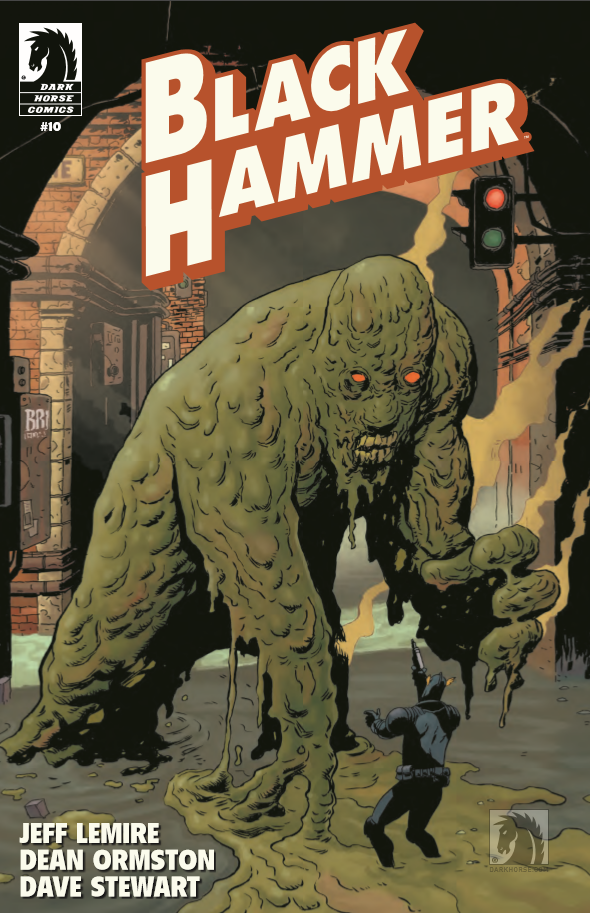 We begin Black Hammer #10 back in Spiral City, where Abe is ordering a mysterious new suit. It appears Abe is going through some sort of mid-life crisis, feeling like he needs to keep up with the times, for fear of being stuck in a city that no longer needs or wants him. Back to the present day, on the farm and Lucy discovers the damaged body of Talky-Walky. During a brief conversation with Abe, Lucy voices her concerns about the town of Rockwood, the strange and unexplained things she’s been discovering and their imprisonment. She accuses them of growing lazy, as they all appear to have given up on finding a way out of their exile. Abe disagrees and leaves to go to the café, where his lover, Tammy, works. Prior to his arrival, Tammy was forced to deal with her angry ex, Earl, who stormed into her café, making threats and generally being a vile bastard. In Rockwood, Earl is the villain, and superheroes don’t like villains, and Earl soon discovers this the hard way. 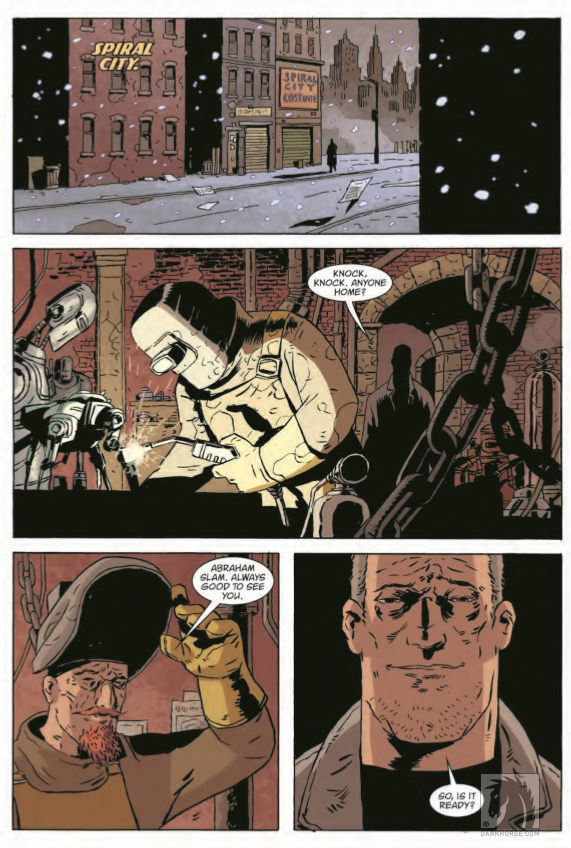 There is a lot going on in this issue, as we see a variety of stories focusing around Abe and Mark. Abe is reflecting on his life in Spiral City before their exile to Rockwood, and it appears that things weren’t all that great for the man they called Abraham Slam. Being an ageing superhero and “keeping up with the times” is a tough gig, and it was starting to take its toll on Abe. It’s beginning to make sense now as to why he loves this new secluded life, away from Spiral City and the heavy burden of being a superhero. I also got the sense that Abe is feeling a bit of guilt over secretly enjoying their exile, and giving up on searching for ways out of this strange town. I also really felt for Mark in this issue, as he faces a heartbreaking and somewhat embarrassing misunderstanding. For a moment there, it felt like Mark was finally finding his place in the world, and perhaps someone to enjoy his exile with, unfortunately things once again didn’t work out for Mark. It was sad seeing the look of disappointment on his face as he walked away, looking like a crushed man. It was also pretty excellent to see the mysterious and elusive Madame Dragonfly get involved in something outside of her cabin. She intrigues me the most, as we know very little about her and her motivations regarding their exile on the farm. 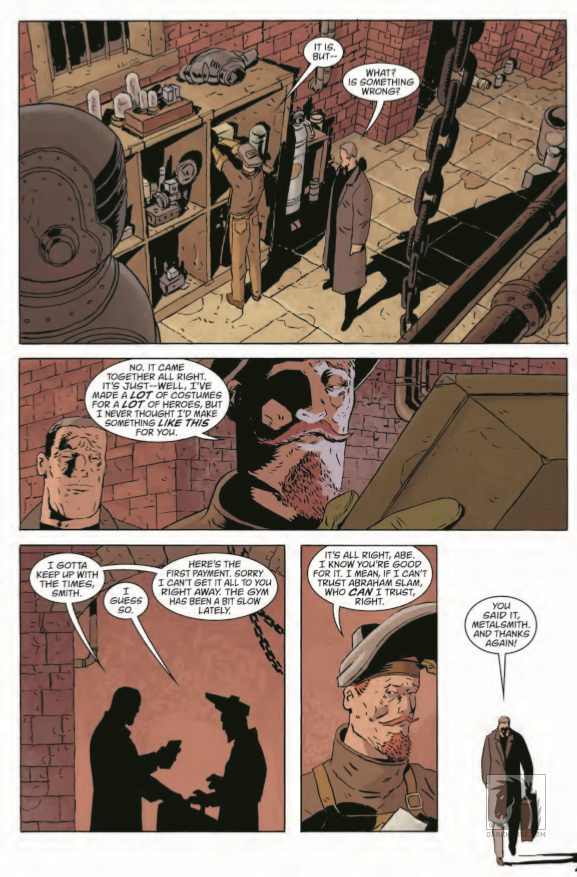 Dean Ormston’s art is powerful and emotive, capturing the sadness experienced by a number of the characters. There is a lot of emotion in this issue, and Ormston goes an excellent job at portraying this through some intense scenes. I also find that there is an edginess to his art, which matches the gritty and dark nature of the story. His use of heavy shading and dark silhouettes helps to reinforce this, as we see a sinister and twisted world unfold before us. I should also mention the wonderful, goopy mess called the Mud Master. I really loved these scenes where we saw Abe and this slimy abomination come face-to-face. This thing reminded me of some kind Blob or Muck-Master. The colouring, by Dave Stewart, is dark and moody, reflecting the uneasy tone of the story. Rockwood looks like a pretty bleak place, where it’s always dark and dreary, and Stewart’s muted colour palette captures this perfectly, as the whole town appears to be awash in greys and darker tones. 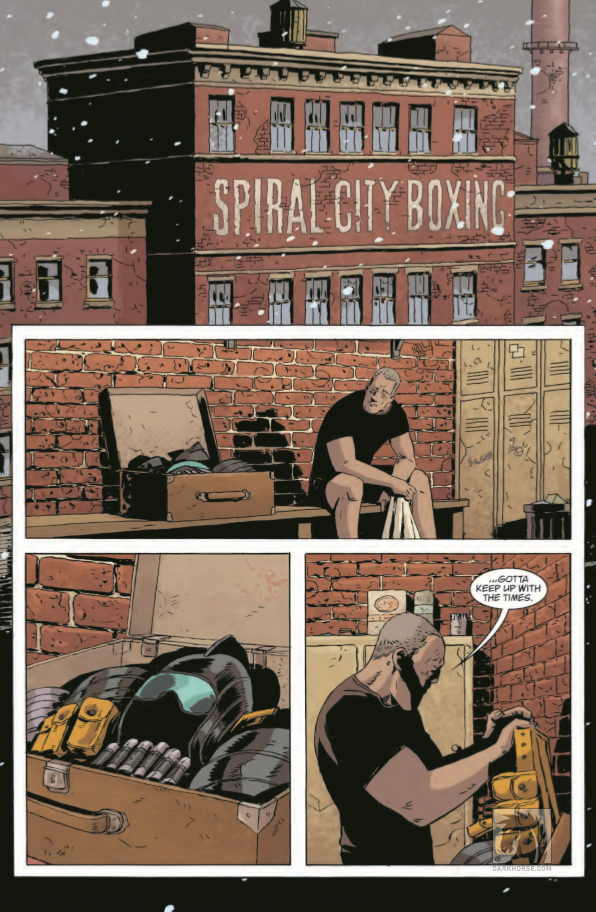 Overall, Black Hammer #10 is an intriguing and compelling issue. There are multiple things unfolding, all of which feel like they are building towards a narrative development or plot twist. I find that the characters are all going through some interesting changes, learning more about who they are and responding to these discoveries. I’m looking forward to when the next issue comes out, where we unearth what Madame Dragonfly is up to.