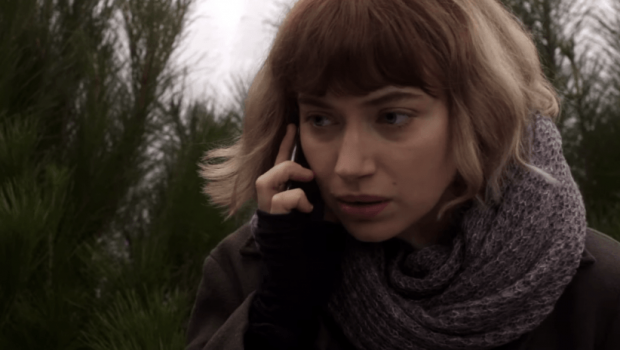 Given the quantity of reboots and remakes, the idea of another Black Christmas (1974), after the 2006 version, is ludicrous. Yet one must not take everything at face value and instead see the forest for the tree. The intentions behind this latest reiteration are undeniably promising. A side note: how many words with the ‘re’ prefix must we use for films?

Bob Clark’s 1974 horror film was strong and inspired many films in the slasher genre, including John Carpenter’s Halloween (1978). It also showed its female protagonists as real people not the misogynistic eye candy prevalent in horror slashers. The 2006 remake was a regression to the peak of the 1980–1990s slashers but without the ironic post-modern devices Wes Craven’s Scream (1996) introduced. All the excessive gore and female nudity returned too.

For this remake of Clark’s film it is important to first highlight writer and director Sophia Takal’s talent. She is best known for her fantastic psychological thriller Always Shine (2016). It was a brutally incisive look into toxic female friendships and Hollywood misogyny. Takal is also an actress who has worked on ‘mumblecore’ features and other horror projects. One was an entry in the television horror anthology, Into the Dark (2018), which also dealt with the dark side of female friendships. 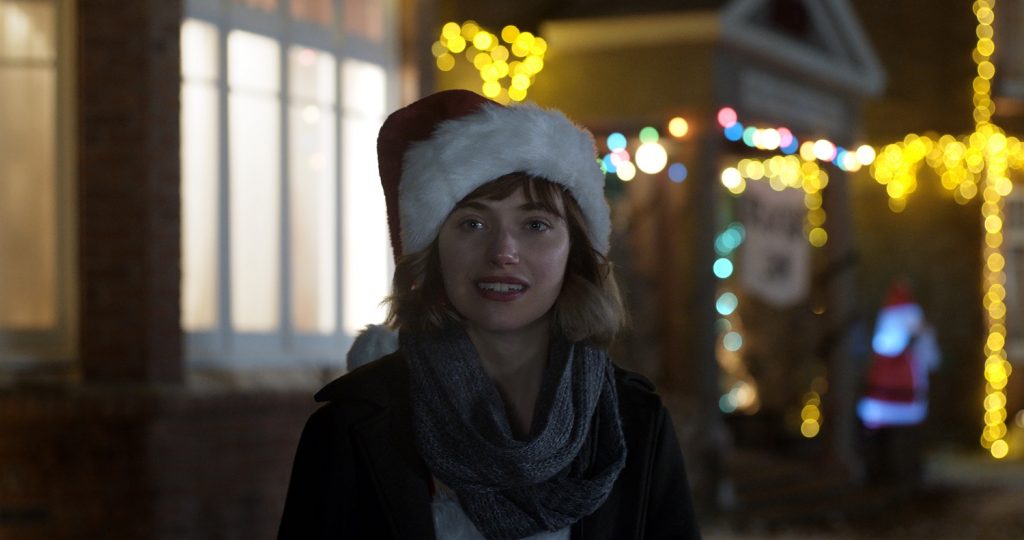 The regression of the 2006 film leads to a second point. In interviews, Takal has said that her film is fiercely feminist and a reactionary piece to how she felt watching the original. Therefore, this reimagining is not unlike Luca Guadagnino’s Suspiria (2018) remake or Elizabeth Banks’ Charlie’s Angels (2019). Takal’s statement promises that this latest edition will be a work inspired by the original and will examine themes and ideas prescient in today’s world.

A third point is actress Imogen Poots’s inclusion. She is no stranger to genre fare and her recent work has been interesting. Vivarium (2019) and The Art of Self-Defense (2019) were fantastic genre pieces that examined timely themes (domesticity in dull suburbia and masculinity, respectively) in compelling fashion. She gave stellar performances in both films, especially Vivarium. Sophia Takal’s vision, coupled with the strong source material and Poots’ casting, means there is a strong chance Black Christmas will succeed.

The film starts with a sorority group having fun, drinking, and celebrating their last day before the winter break. As one woman walks home, a cloaked figure follows her and then brutally murders her. It is the start of a string of homicides at Hawthorne College. A group of friends (Poots, Aleyse Shannon, Lily Donoghue, Brittany O’Grady) are alarmed by the events. They have no one to trust, not even the lecturers or the campus security guards. The film follows them trying to survive their college horrors and their collective fears of being a young woman in the modern world. Meanwhile, the serial killer remains on the loose. 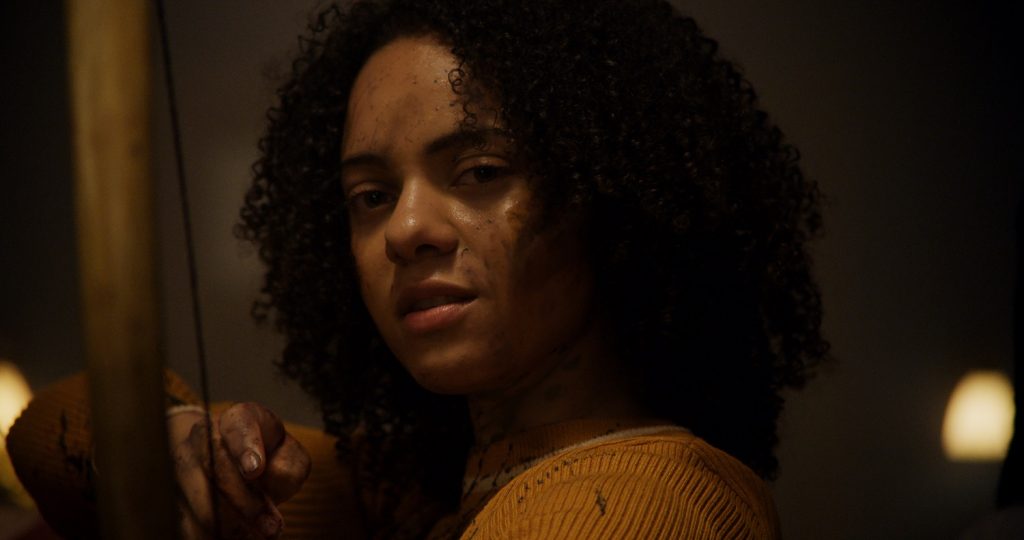 This is a brief and ambiguous synopsis because the film’s trailer spoils the story, including who is killed and the reveal of the killer. It is a shame because it is an enjoyable and striking horror slasher that digs under one’s skin with more than blood and gore. When the film’s PG-13 classification, the equivalent of M in Australia, was announced, the public reaction was negative. There are effective scares, including a one-shot take that subverts horror cat tropes, and the sound design enhances the suggestion of brutal violence. Unfortunately, there are also signs of jarring editing, suggesting compromises to maximise the viewership. It hinders the film’s impact.

The best examples of horror cinema are not governed by blood and gore but the ideas behind the horror and the powerful suggestion of violence. Black Christmas probes gender flaws and the biases of modern men and women. It signals a natural progression from the previous entries, specifically female representation and their status. Embedding ideas into the characters and story provides punch to the scares, laughs, and progression of the character arcs. For example, the opening shows a passage of text about gender lines and the woman killed in the street reveals Takal’s intent regardless of the audience’s approval. It is an unsubtle, confronting approach but necessary for the film to make its point.

Takal and screenwriter April Wolfe highlight the contrasts of the places of women in the world through three characters. Kris is an aggressive feminist who preaches against the patriarchy, sexual assault, and discrimination. She possesses the narrow-minded outlook one has when aggressively fighting for ideals only to lack empathy and ironically alienate those close to them. Contrastingly, the film examines the notion that compliance to tradition ensures survival and validation when looking the other way at one’s principles. Riley is caught between these viewpoints. She has felt the brunt of abusive men but is supported by friends. She has the urge to fight but wants to be left alone. It is major credit to Takal, Wolfe, and Poots that her character arc works as effectively as it does to make the dramatic stakes and conclusions feel earned. 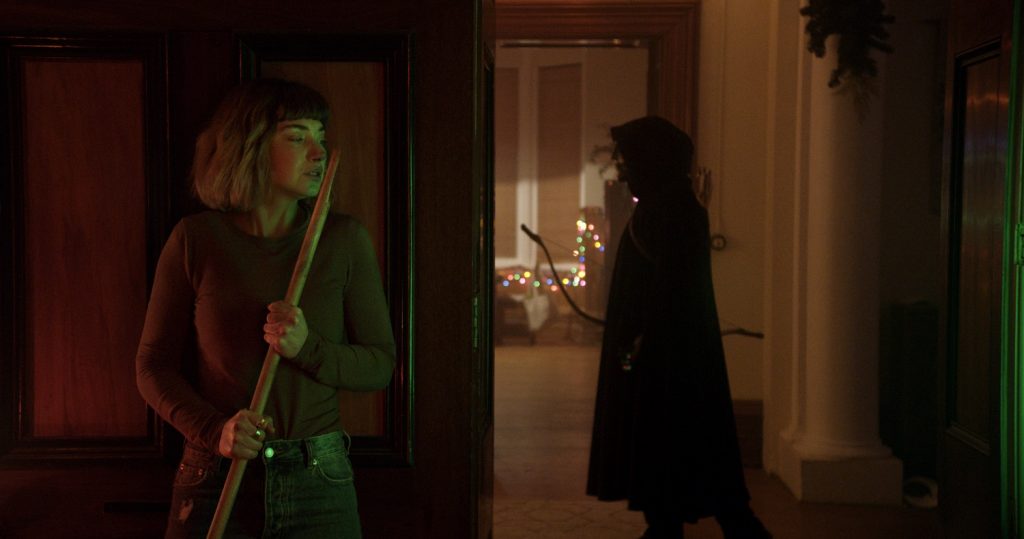 The film does not forget to be fun because there are clever nods to the original. One example is the use of plastic as a weapon. The male characters are painted as amusingly unhinged. Cary Elwes is a hoot as Professor Gelson. He exaggerates his English accent to a hammy or inherently creepy degree. Ben Black is menacingly self-righteous as Riley’s assaulter, or unamused [sic] in an incisive and metatextual fashion, the inclusion of the campus security guard and Simon Mead’s performance as Marty’s boyfriend. Caleb Eberhardt’s character, Landon, is a potential love interest for Riley. He makes a strong claim for being unsure of how to act in front of women in terms of being nice to them in today’s world, which can be seen as well-intentioned or disturbing.

The four leads’ chemistry is infectious due to the occasionally witty and oblivious dialogue. ‘Can Christmas lights expire?’ a character asks. The  motives for the murders are hilariously silly and prescient. Even feminist and masculinist [sic] notions are twisted to darkly funny effect. A male character taunts Riley with the mantra ‘my body, my choice’. Similarly, Nate becomes despondent with being grouped with reprehensible men to the point that his mention of ‘not all men’ backfires.

Due to the performances, the female character arcs, especially Riley, remain unforced and don’t pander to political statements. Poots is fantastic as Riley. She brings nuance and conviction to a character initially conflicted and then content with being a forceful presence in the final act. Shannon is believable and sympathetic as Kris, even when appearing self-righteous and pervasive. When her character reaches an epiphany, the moment feels earned and satisfying. As for the supporting cast, Lily Donaghue and Brittany O’Grady are enjoyably spirited, and Madeleine Adams is solid as Helena. The overall rapport between the four leads is fun to watch. 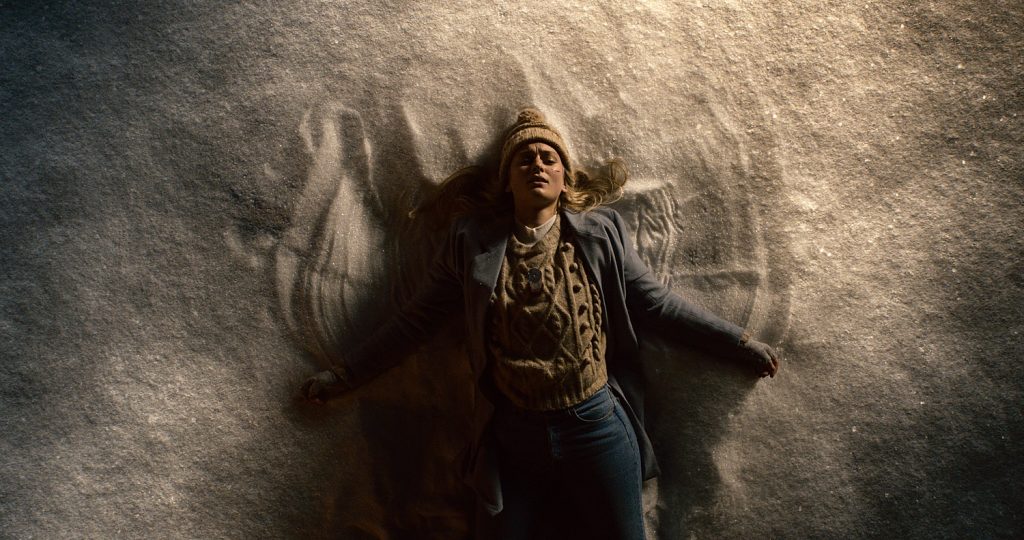 Black Christmas is more than another shot-for-shot horror remake. It is defined by Takal’s viewpoint, born from how she felt while watching the original film. She takes the staples of the slasher genre and then enriches them with contemporary concerns, particularly the vulnerability of women today. Consequently, Black Christmas creates its own stamp due to several committed performances, Takal’s assured direction, the witty script, and the clever weaving of its feminist ideas into the tropes of the horror genre. Recommended.

Summary: Black Christmas creates its own stamp due to several committed performances, Takal's assured direction, the witty script, and the clever weaving of its feminist ideas into the tropes of the horror genre. Recommended.