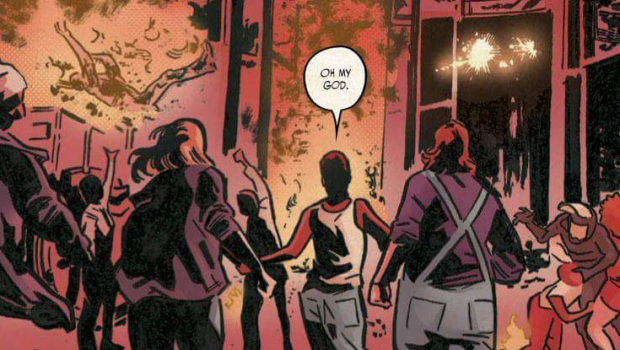 Summary: It’s all chaos and mayhem as the locks are disabled, the barriers taken down and the prisoners let loose!

A gripping and though-provoking read.

In Bitch Planet #9, it’s all chaos and mayhem as the locks are disabled, the barriers taken down and the prisoners let loose. The inmates of Bitch Planet are no longer the downtrodden captives but instead are the highly charged and rage-fuelled mob, seeking sweet revenge and disorder. We also finally get to see more of the mysterious Eleanor Doane and learn more about who this person is. 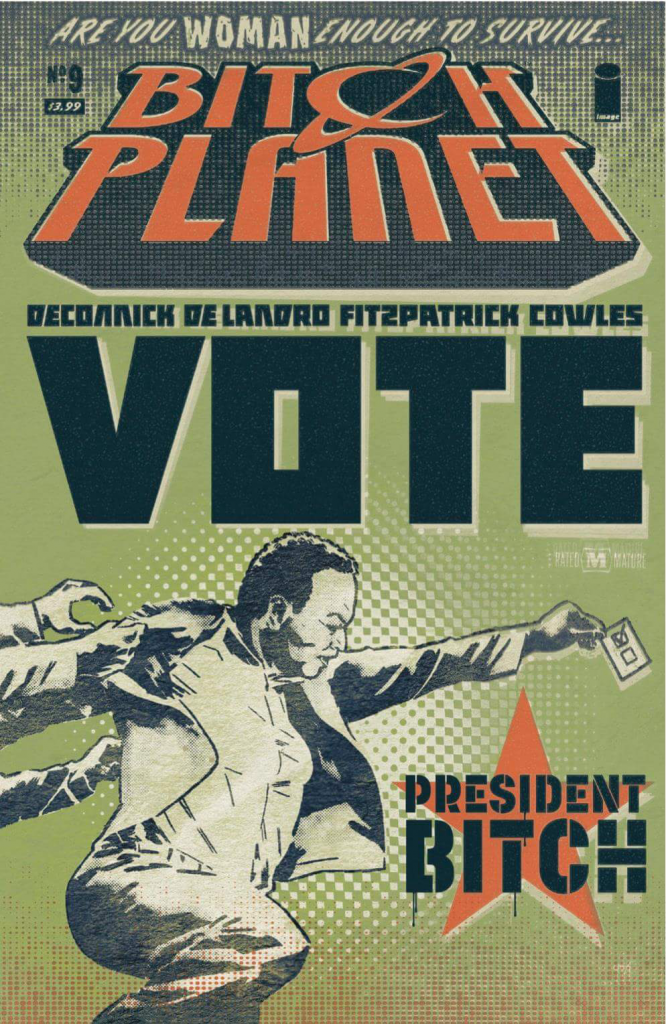 This issue begins by exploring more of the patriarchal politics that govern this world. We are reminded that women are men’s accessories, with a sole purposed to stay quiet and be obedient and attractive show ponies for ogling male eyes. We also get to see more of that male chauvinistic guff and it’s enough to make you feel sick. We then quickly begin where the previous issue finished, back on Bitch Planet with all hell about to break loose. Makoto Maki, overcome with grief over the death of his daughter, Meiko, decides to disable the prisons security system, taking over Bitch Planet and thus releasing the inmates. He does this in her honour, as some kind of last respect and tribute for his daughter. This is clearly a well-thought-out plan…I mean what could possibly go wrong? Impulsive, reckless and rash, Makoto’s actions forever change the shape of things to come and a brash decision made out of grief, quickly dissolves into something much more serious. It’s absolute anarchy, fuelled with bloodlust and revenge as inmates and prison guard’s face off with one another. This is bad enough but what Makoto didn’t anticipate is that not all of the inmates get along with one another. Unfortunately, this is a perfect example of hate breeding hate and there are some jarring moments that we see unfold. Alongside all of this mayhem, we also see Kam and Whitney’s story develop. In the previous issue, Kam had stolen a secret map of the facility, hoping to find her imprisoned sister, however she instead found the cell of Eleanor Doane. Much is revealed, as we learn more about this mysterious and influential woman and the reason as to why she has been kept hidden away. 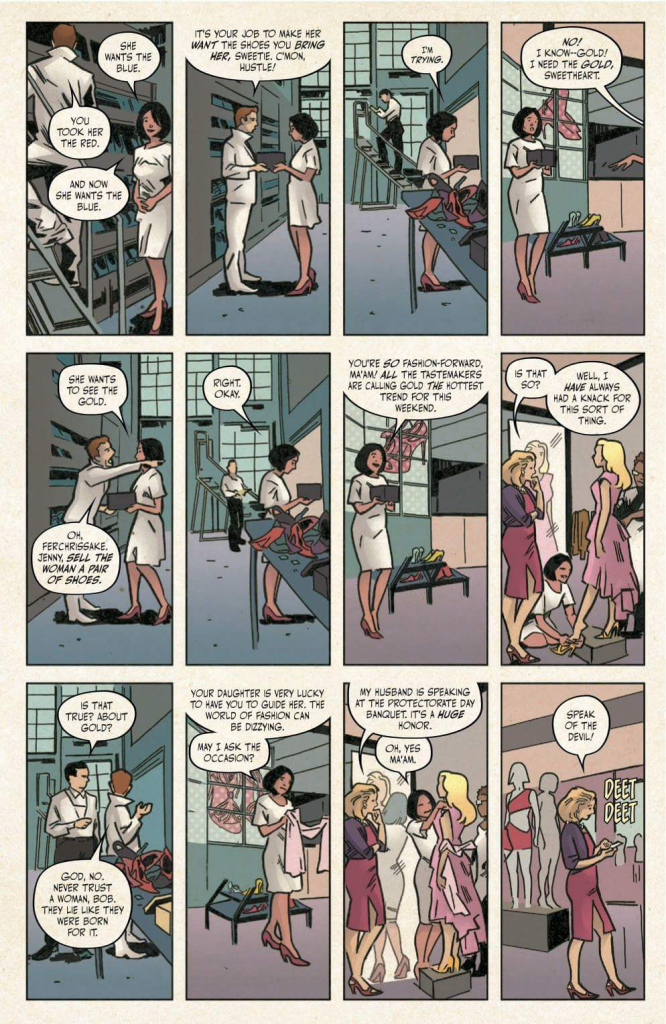 The highly sensitive content in Bitch Planet is always confronting to encounter and this issue is no exception. Kelly Sue DeConnick delivers us another highly charged and thought-provoking issue, filled with brutal and cruel scenes, juxtaposed alongside touching and poignant moments. I really enjoy seeing the character development of these women evolve throughout the story and each new issue reveals different and unexpected qualities in these women. Throughout all of this chaos, murder and hate, it’s the quiet scenes that I find affect me the most. We see unlikely friendships and bonds being made and downtrodden women showing strength and resilience in a variety of ways. This is such clever writing, with a real sense of pathos and suffering with its foundations cemented on the backs of commanding and powerful women. DeConnick has really hit a nerve on a personal level for me and it’s hard not to be touched by this story. 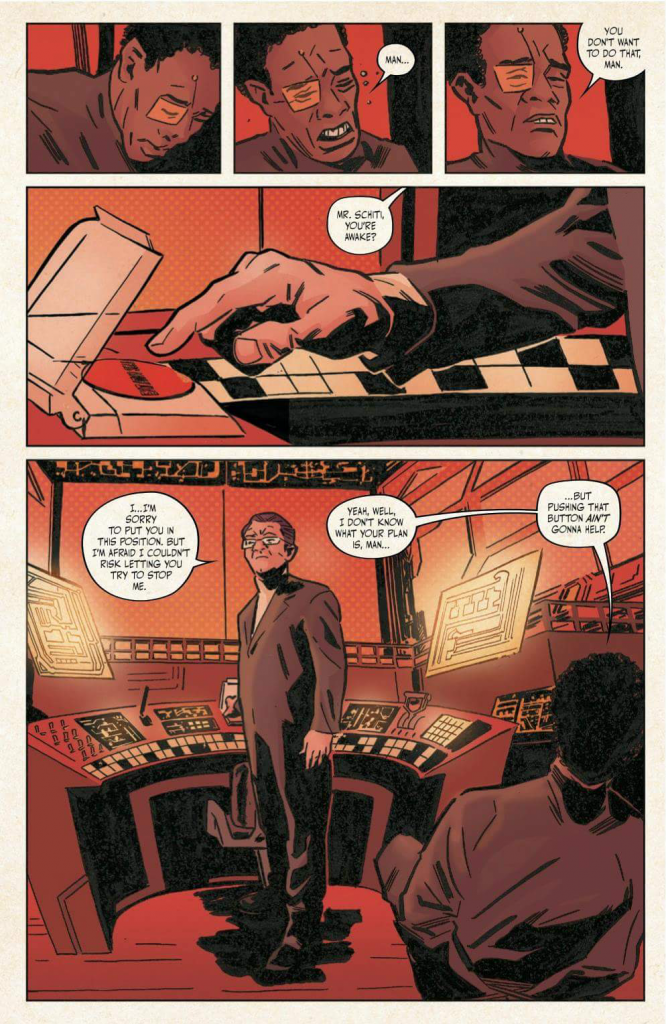 Valentine De Landro’s art is gritty and highly emotive. This issue is filled with a lot of violent scenes that are both confronting and shocking to look at. There is a real sense of fear and anxiety in the faces he draws and I enjoyed seeing the look of stress and concern finally on the security guards faces for a change. The action sequences are graphic and realistic, showing a variety of detailed and explicit scenes. Everything is intense and highly visual to look at, leaving you feeling like you’ve experienced a genuine prison riot! Oh, lordy! I also enjoyed seeing the scenes where the AI security fembot is desperately trying to quell the rioters. She’s a giant, hulking, powerless presence and she looks rather daft standing there, as inmates are tossed through her primed and polished figure. I should also mention Kelly Fitzpatrick’s colouring. She also helps to heighten the ever-present feeling of danger, with the intense red and pink colour palette that’s been used. You can’t help but feel a sense of peril and threat from literally seeing red on nearly every page. The use of a muted colour palette during the security camera footage scenes is also a clever way of reinforcing the fact that we are viewing much of the women’s actions from the eyes of the security guards. A clever tool that works really well. Finally, the use of the retro-like dots that is reminiscent of the four-colour process is an interesting and graphic tool and it separates these elements on the page, which draws your eyes to that particular object or person. 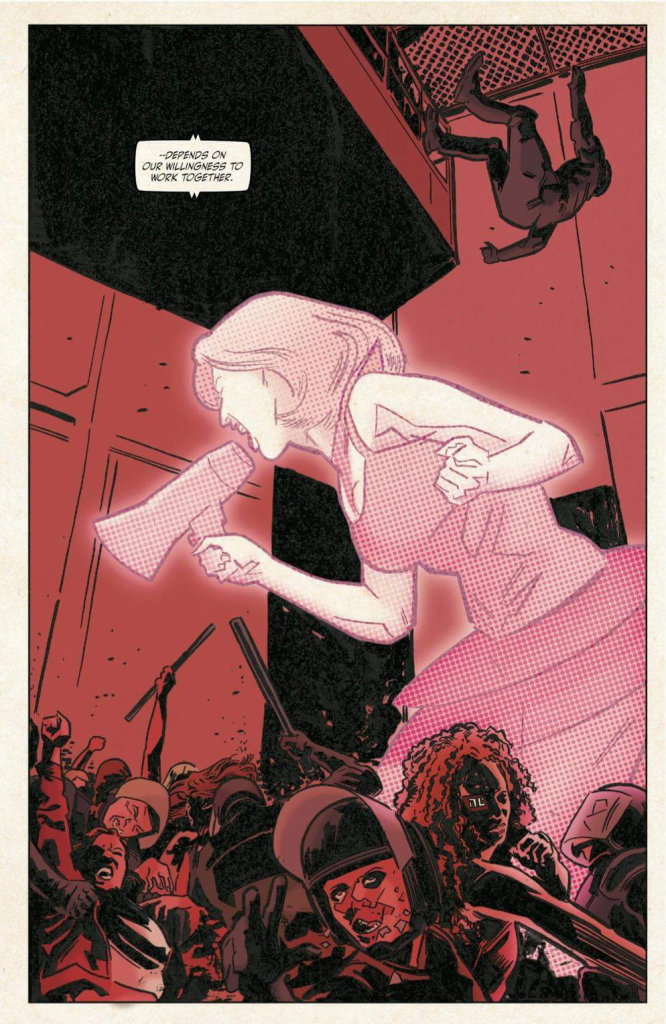 Overall, Bitch Planet #9 packs a punch! It’s a well thought out and stimulating read. I feel like a lot of love and dedication has gone into this story and the women within it. It’s confronting and inspiring at the same time and that itself makes it an important comic to read. I find that I take my time reading each new issue of Bitch Planet and I also enjoy reading all of the political and though-provoking essays and interviews at the end of the issue. DeConnick tears down those boundaries that make a lot of people uncomfortable and in doing so creates a truly unique story, filled with powerful characters. I just love this series and this issue is another great instalment to this epic story.

Yep, you guessed it…I’m giving this issue 5 out of 5 stars!