Summary: The content is compelling and delivers a heavy dose of political themes and this coupled with the unexpected plot twists leads to some gripping moments.

In this issue of Bitch Planet we delve deeper into Kam’s ongoing narrative and finally learn more about her sister, Morowa. Up until this point we have been left in the dark concerning Morowa and only guessing as to who she is and why she is a non-compliant inmate on Bitch Planet. Well now the big reveal has happened and we are finally introduced to a whole new group of inmates, characters and stories that seem to all be interconnecting with one another. The content is compelling and delivers a heavy dose of political themes and this coupled with the unexpected plot twists leads to some gripping moments.

We already know the kind of women that are forcibly sent to Bitch Planet. They are women who are considered defiant and do not conform to the patriarchies expectations of how they should look and behave. If you do not fit into this cookie-cutter mould of the “ideal” woman, then you are quickly labelled as non-compliant and sent to the off-world prison referred to as Bitch Planet. If you are a woman, every aspect of what makes you your own unique self is analysed and judged. So what about trans women? Where do they fit in this dystopian, patriarchal society? This is the issue where Kelly Sue DeConnick introduces us to these women and begins to tell their story, with Morowa being revealed as the central protagonist. 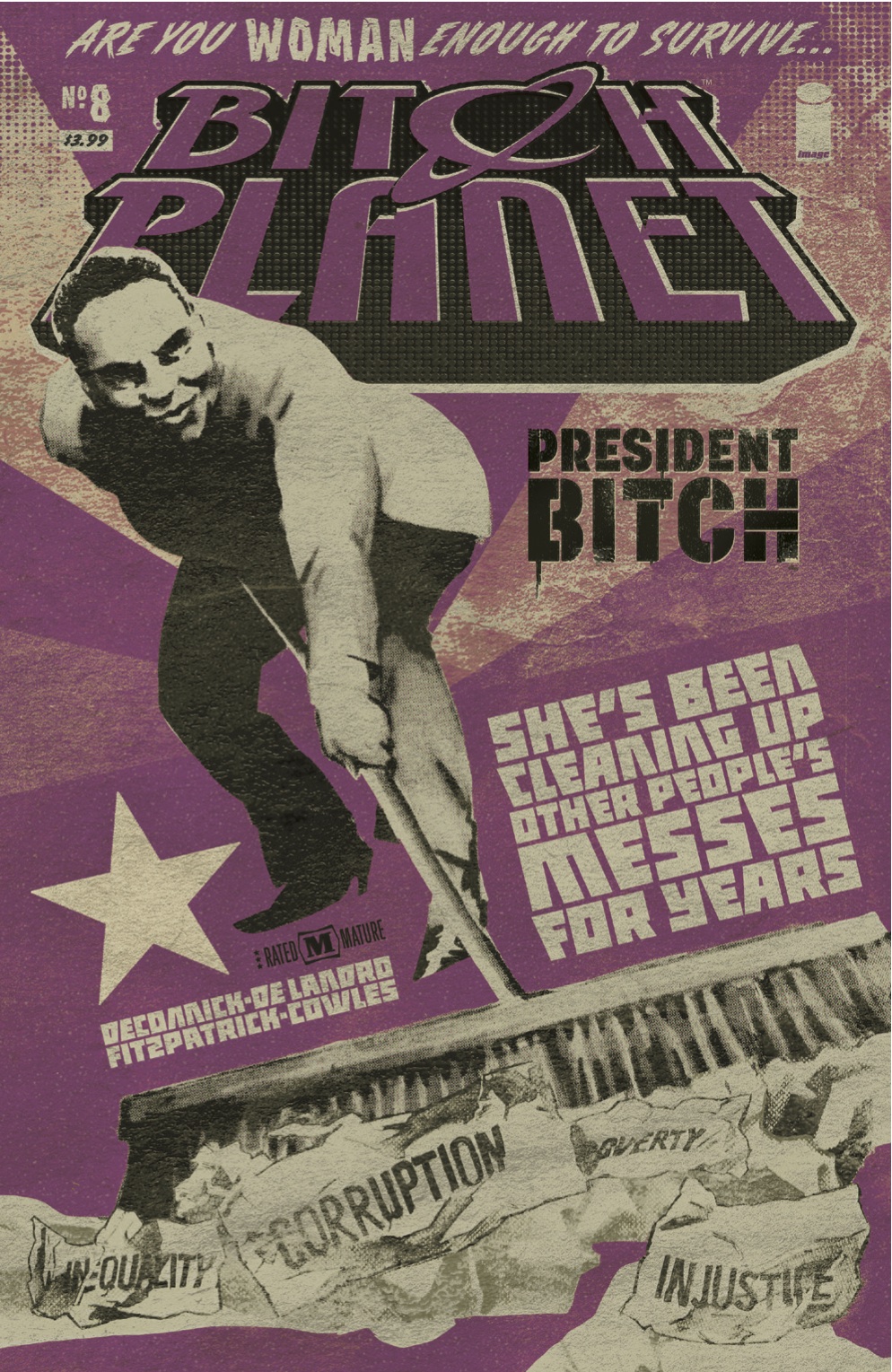 Deconnick does a great job at introducing us to these women and highlighting what it would be like to be a trans woman living in this world. At the end of this issue DeConnick mentions that she worked with three trans consultants to help her portray these women with the respect that they deserve. Far too often trans women have been underrepresented in comics and she did not want to misrepresent them in any way. Well-done DeConnick! In my opinion you’ve done a great job here.

We also continue with Makoto’s story in this issue. He is still desperately searching for his daughters whereabouts on Bitch Planet. The AI security system is still a constant presence, acting like a watchful babysitter and scrutinising his actions closely. He is a smart man and after we see him experience a sad and vulnerable moment, he then decides to take action. Naturally his actions affect all of those on Bitch Planet, and we see an interesting series of events unfold that lead to some pretty intriguing plot developments within the main story arc.

This is also an issue where we see a lot of tension between two central characters, Kam and Whitney. Their conflict is bleeding through the pages and I just love the strained relationship developing between them. They are now both reluctant cellmates, locked in a small room together with nothing but bad blood and loathing between them. This all makes for some interesting dialogue and some unexpected revelations. This issue was all very fast-paced and I enjoyed the sudden and jarring plot developments that resulted as a consequence of this. It is certainly filled with bucket loads of mystery and intrigue and there are now a whole heap of unanswered questions bubbling away in my mind. The biggest one being: who is Eleanor Doane? 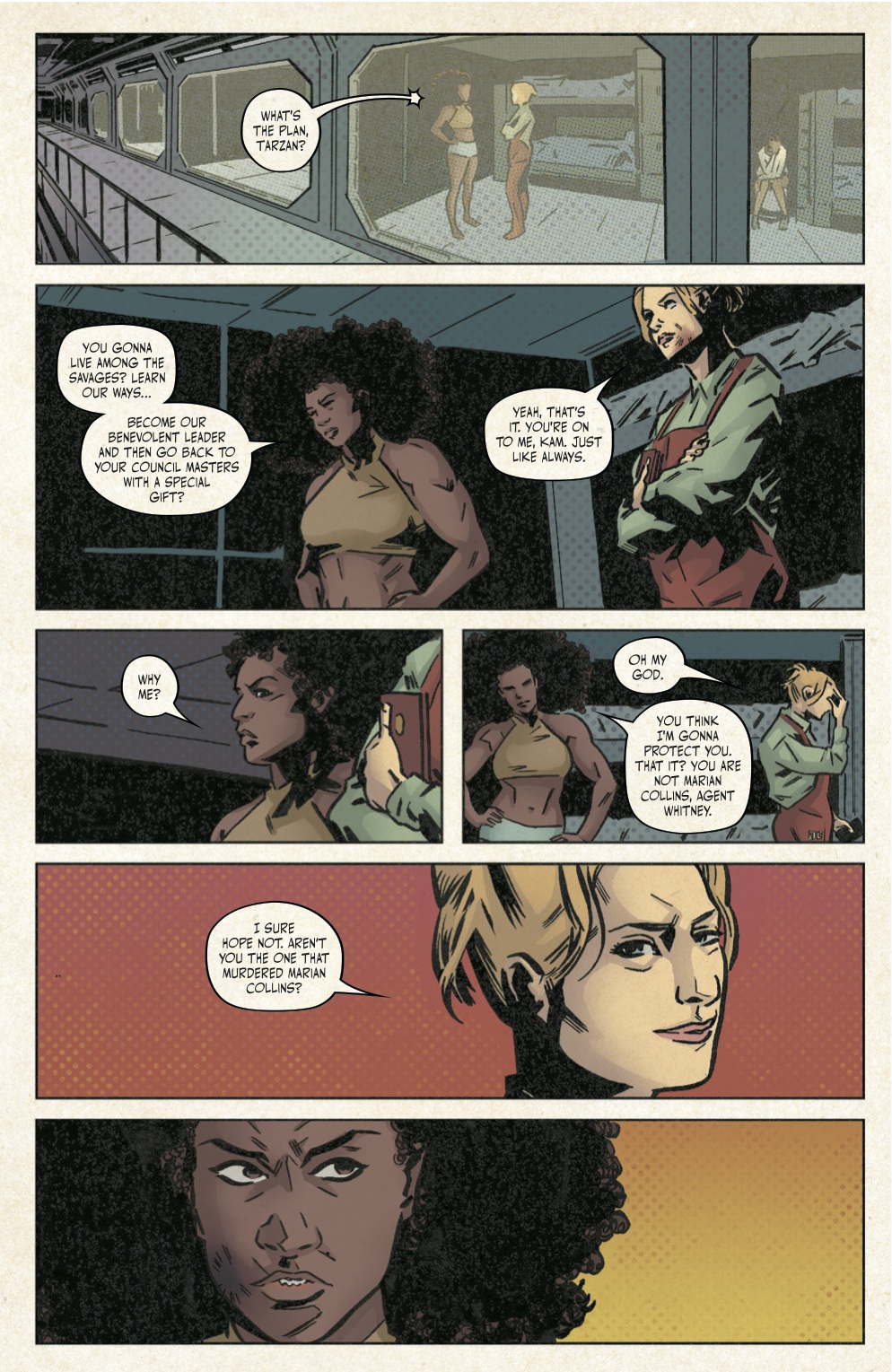 I found Valentine De Landro’s art to be particularly engaging in this issue. He really captures some powerful moments that I found quite unnerving. This was mainly achieved through many of the detailed facial close-ups that we get to see. Whether it be the blank, yet powerful face of Morowa, the forced synthetic smile of the AI security system or the weary and haunted face of the mysterious Eleanor Doane. They are all powerfully engaging, beautiful to look at and leave a lasting imprint. De Landro’s panelling is also very effective within this issue. He very cleverly employs a grid-like effect, during a particular scene, which gives the sense that we are witnessing the events as seen through a security camera. This effect also allows the story to be told in a fluid and visual manner, without relying on much dialogue to drive the story forward during these scenes. De Landro also sets an edgy pace when he employs the use of a blacked out maze to symbolise Kam and Whitney negotiating their way through the prison whilst the power grid has been shutdown. This heightens the sense of drama and draws us more onto the intense turn that the story takes. I found all of these interesting visual techniques to be very effective ways of heightening the tense atmosphere that is driving the story. I should also mention Kelly Fitzpatrick’s colouring. Her muted colour palette does a great job at creating a sense of bleakness, which establishes the serious and dark tone of the comic. 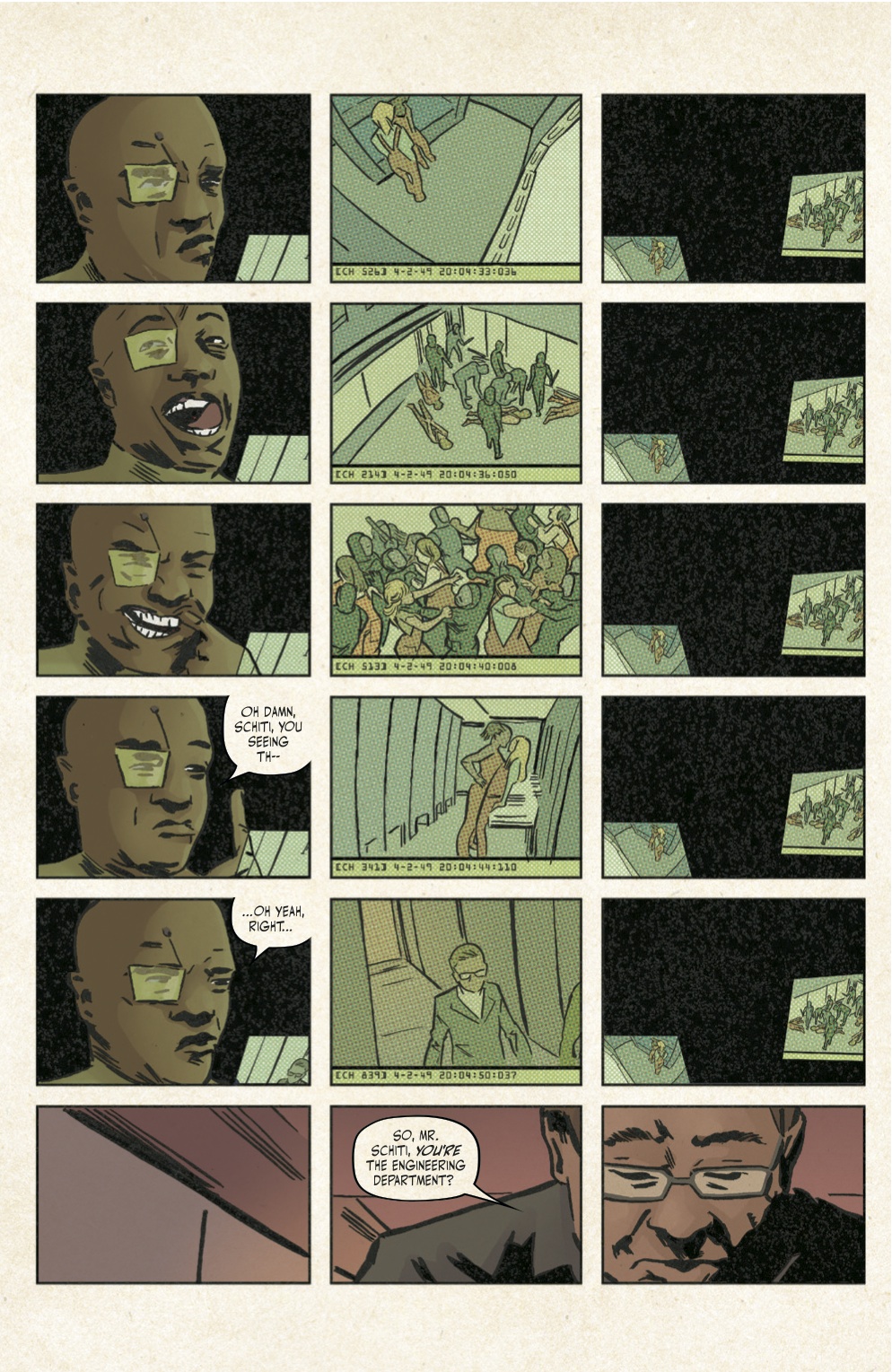 Overall I found this issue of Bitch Planet to be an exciting and intriguing read. This really is a comic that engages the reader on an emotional and often confronting level. It forces us to question not only the dystopian world in Bitch Planet but also the world we live in today, as it’s ultimately a reflection of that. It’s refreshing to see a comic that openly embraces themes, concepts, people and politics that are too often underrepresented today. It’s time we embrace storytelling like this and enjoy the complex characters and dynamic themes that it offers us. I can’t wait to see where the next issue takes us, as I can only imagine that it’s going to get hectic. Well done guys, I’m thoroughly hooked!