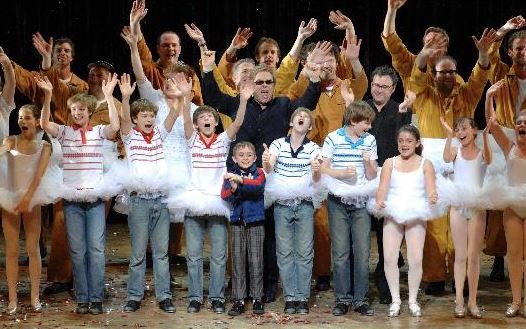 BILLY ELLIOT THE MUSICAL RETURNS TO AUSTRALIA IN 2019

Universal Theatrical Group, Working Title Films, Greene Light Stage, Michael Coppel Entertainment and Louise Withers Presents are delighted to announce that Billy Elliot the Musical will return to Australia in 2019 for its 10th Anniversary Tour. The hugely successful West End musical premiered in Australia in 2007 as the first international production outside of the UK, prior to its Broadway premiere.  With the first Australian tour concluding in Melbourne in 2009, this new 10th Anniversary tour kicks off in 2019, ten years after the curtain came down in Australia.

Billy enjoyed huge critical acclaim with Sydney and Melbourne audiences flocking to the theatre, however the physical design was so complex at the time, that touring beyond those two cities was not possible.  Now with some clever adjustments, the Producers are delighted that this incredible stage production is able to tour to other capital cities. Now all of Australia can experience the magic and fall in love with Billy Elliot the Musical.

Billy Elliot the Musical will open at Sydney Lyric Theatre in October 2019 followed by planned seasons in Melbourne at the Regent Theatre from February 2020, Crown Theatre Perth from June 2020, QPAC’s Lyric Theatre in Brisbane from July 2020 and the Festival Theatre at Adelaide Festival Centre from September 2020.

Featuring music by the legendary Elton John, book and lyrics by Lee Hall, choreography by Peter Darling and direction by Stephen Daldry, Billy Elliot the Musical has been seen by almost 12 million people worldwide.  Acclaimed by audiences and critics alike, it is the recipient of over 80 awards internationally, including ten Tony Awards, five Olivier Awards and eight Helpmann Awards.

Billy Elliot the Musical’s composer Elton John had a close affinity with the original Australian production, attending the premiere in Sydney in 2007 and visiting again during his concert tour of Australia in 2008.

Elton John said “Billy Elliot for me is one of the most rewarding and creative works of my career. I have very fond memories of the Sydney production in 2007 as it was the first city outside of the UK we mounted the show and found many incredibly talented children who would go on to carry the show through its successful Australian run. It is truly the most heart-warming show and I am so grateful that new generations of Australians will continue to experience its joy and inspiration.”

Eric Fellner, Producer, said, “We are thrilled that Billy Elliot is finally able to return for this Australia wide 10th Anniversary Tour, a decade after it was so loved and supported by audiences in Sydney and Melbourne. We hope that the rest of the country will enjoy it as much now as those audiences did then.”

Australian Producer Louise Withers said, “Having been a part of the life of Billy Elliot worldwide for over 13 years, we are absolutely ecstatic that we have the opportunity to bring Billy back to Australia. The Australian creative and technical team of the 2007 production, have since been taken across the world to stage productions in other countries, including Japan and Korea, and the original Australian Billys are excelling in their chosen paths of the industry. It further goes to show that Australian artists and creatives are leaders in their field. This 10th Anniversary Tour will bring our Australian team back together, to restage Billy and celebrate its 10th Anniversary here in Australia.”

‘Billy’s a whizz! He’ll lift your spirits, make you cry and send you home high with hope’ – DAILY MAIL

‘Billy Elliot works them to the hilt and sweeps its audience away. Resistance is Useless…Stunning…Beautiful’

‘A non-stop runaway blockbuster of a smash. The best show you will ever see’ – NEW YORK POST

‘A gorgeous musical from top to bottom! Explosive and altogether spirit-lifting. Grabs hold of an audience and sends it soaring!’ – CHICAGO SUN-TIMES