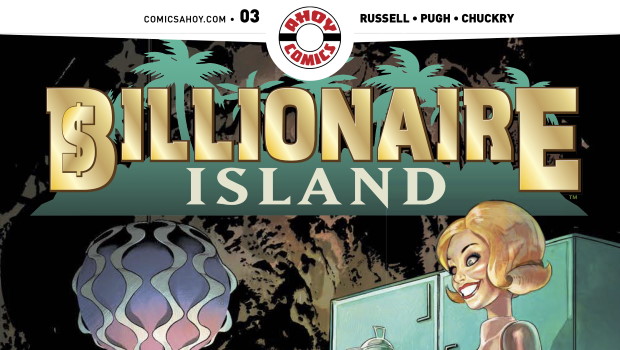 Summary: At times it's easy to imagine there really is an island or two set up just like Billionaire Island... it's a scary thought.

Occasionally stories show up in different forms of media that seem all too prescient. Idiocracy seems far to “documentary” like now for comfort and we can add Billionaire Island to that group. Sure at the moment some of the events might seem a little “out there”… but Idiocracy had it’s moments that made you stop and think “surely not… that won’t happen” and look where we are now! Fortunately in both cases, the creators have tried to soften our enlightenment to these horrors with humour. If you can stand how close some themes are to reality, you are likely to get a good chuckle here.

As mentioned, it’s hard to know where the line between absurd “caricature” and “I could name half a dozen real people like that” is these days, especially in the world of the super rich. Mark Russell plays with that line and gives his characters enough eccentricity to keep them a hairs width from completely recognizable in our current landscape. The whole world we get to witness in Billionaire Island is indeed much like that of Idiocracy… it takes some themes and just cranks them right up. Taking selfies while eating actual gold covered food… ok, that one might be on the “it could literally be happening in our current reality” side of things. But Mark knows just which elements to push that bit further… to make them just so “out there” that we can laugh at their absurdity rather than worry that somewhere some super wealthy person is doing what we are reading of.

Steve has done a fantastic job here with filling each panel with energy and the sense of surreal in a world going/gone insane. Have a look at the eyes of some of the characters and you can sense just how far gone they are. The subtle things really help bring the characters to life too, the hint of the trendy tattoo peaking out from behind the hipster beard… that attention to detail that makes the world seem so real… in such a scary scary way.

Laughter is often said to be the best medicine and in the state our world is in at the moment, at times it seems like all we have. Though some of the elements of Billionaire Island do seem too plausible, there is enough here to give readers a giggle in the face of the horrors of excessive wealth and greed. An interesting story that might just give you a few tears of joy among those tears of nihilistic dread.