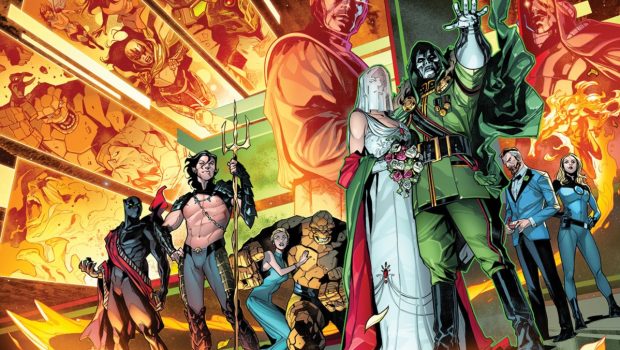 BIG SURPRISES IN STORE FOR THE FANTASTIC FOUR’S 60TH ANNIVERSARY!

The Fantastic Four, the very super heroes that kicked off Marvel Comics’ Silver Age are celebrating 60 incredible years! Home to concepts and characters that revolutionized comic book storytelling, Stan Lee and Jack Kirby’s beloved creations have enjoyed one of the most memorable sagas in comic book history. Now, get ready to see what’s in store for Marvel’s First Family this year in all-new teaser artwork by Valerio Schiti. This epic piece foreshadows the Fantastic Four’s action-packed year, giving fans a hint at the deadly threats they’ll be facing and a first look at an unexpected new arc that kicks off in May!

“Dan and RB are working to make the Fantastic Four’s 60th Anniversary a nonstop thrill ride for fans, one that touches on all aspects of the FF’s world and re-establishes them as the cornerstone players of the Marvel Universe,” Executive Editor Tom Brevoort said. “Expect some big surprises, status quo changes and shocking revelations in the months ahead—to say nothing of the return of some classic villains that readers have been asking for!”

Keep an eye out for announcements about the other exciting things Marvel Comics has in store for the Fantastic Four’s milestone celebration. For more information, visit Marvel.com.