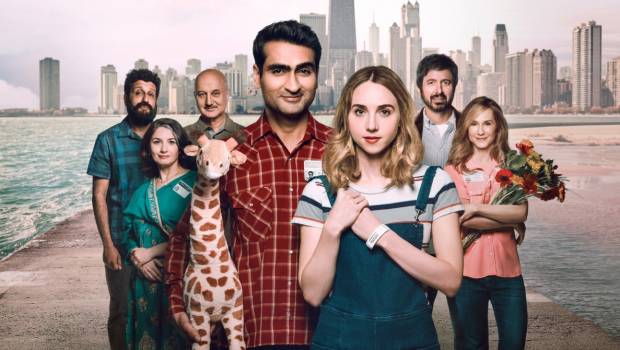 Summary: Romantic comedy, 21st century style as stand up comedian Kumail Nanjiani and his wife translate their real life travails into a heartwarming comedy romance sure to touch all who watch it.

Star-crossed lovers are one of entertainments great tropes. Think Romeo and Juliet, and the entire genre unspools before your eyes over the centuries. Remarkably, the genre never seems to wane, which gives you a sense of the hopeless romanticism claiming most people going to the movies.

The Big Sick is a biographical depiction of the romance that developed between Kumail Nanjiani (Silicon Valley) and Emily Gardner (or Gordon in real life), played by Zoe Kazan. Kumail’s Pakistani family is depicted as traditional transplants in a foreign land, retaining their culture while surrounded by the more permissive, anything goes America. Kumail has somewhat bucked their system, leaving home to work as a stand-up comedian instead of his, critically, mother’s expectation that he study as a lawyer.

Emily, on the other hand, is a more free spirited, uninhibited daughter of liberal Americans, happy to go home with Kumail after flirting with him during his comedy set. Their relationship burgeons and soon they are inseparable.

Then the inevitable culture clash occurs. Kumail stores in his bedroom the photos of introduction from Pakistani women his mother constantly introduces him to at the regular family dinners. When Emily discovers this, it sets off an argument about his reluctance to tell his family about her. They fight and break up. At this point, the movie is as expected. Soon after, however, Kumail is contacted by a friend of Emily’s to tell her she has been admitted to hospital.

At this point, after Emily is placed into an induced coma while doctors struggle to work out what is wrong with her, that the movie introduces Hunter and Romano. Holly Hunter’s acting credentials go without saying, so it is all the more remarkable to realise that Ray Romano (Everybody Loves Raymond – as if I had to remind you) is actually a very good, and natural, actor. The pairing of the two, a married couple with their own flaws and concerns, is the movie’s masterstroke. They are incredibly natural together, and it is that naturalness that gives their love for each other, their daughter, and eventual acceptance of Kumail, a greater force.

The only real flaw of the movie is that at times it sounds like an excuse for a series of one-liners at the expense of more free flowing natural dialogue. It is, however, very funny in places and never less than heartfelt. There is a moment in the movie when the funny mask slips, and the real Kumail Nanjiani emerges, revealing a young man trying to balance love of family with his love for Emily. Similarly, Romano absolutely nails it in a scene where he reveals to Kumail a one off infidelity, the guilt of which he still carries.

The Big Sick isn’t afraid to tackle the treatment of Pakistani’s in America, particularly the issue of terrorism. It’s probably still too early to make jokes about 9-11, but there is an amusing interlude that features it, while the heckling of Kumail by a fratboy (go back to ISIS!) is used as a way of demonstrating the stress Emily’s family is under as the rise to Kumail’s defence. The movie also sympathetically portray’s Kumail’s family, who like all immigrant communities, retain much of their culture while also embracing the American experience.

Overall, The Big Sick is an entertaining comedy romance that while never changing the goal posts, is sufficiently different to bring something new to the genre. Nanjiani and Gordon’s script flows effortlessly and we get a real sense of how romance in the 21st century unfolds.

There are a number of entertaining short features included. Apart from the obligatory cast and filmmaker commentary, we see how Emily Gordon inspired Emily Gardiner, the approach Romano and Hunter took to their roles, how Gordon and Nanjiani wrote their script and includes a movie panel from the 2017 SXSW Film Festival.