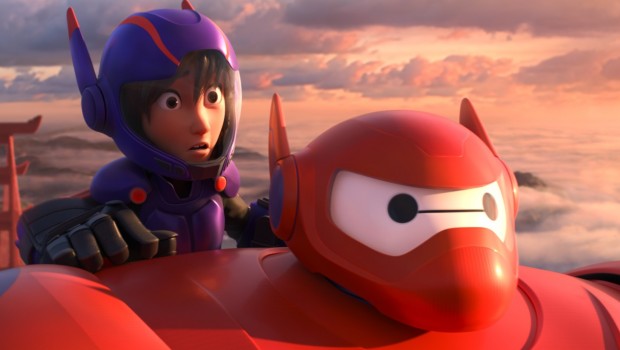 Big Hero 6 takes the infamous Walt Disney animation charm and marries it with the high-paced superhero thrills of Marvel films to create an incredible piece of cinematic art. Don Hall and Chris Williams’ film takes a unique direction for an animated film as it has a firm grasp on raw human emotion while existing in a heightened reality. Big Hero 6 introduces the world to the incredibly lovable and unlikely hero, Baymax who earns his place in the realm of the most memorable and beloved Disney animated characters.

In the bustling metropolis of San Fransokyo, budding bot-fighter Hiro (Ryan Potter) has to constantly be rescued from trouble by his sensible older brother, Tadashi (Daniel Henney), who is trying to convince his genius younger brother to use his intellect for something useful. When he takes Hiro to his research lab at San Fransokyo Institute of Technology, Hiro meets all Tadashi’s friends as well as his idol, Professor Robert Callaghan (James Cromwell) and Tadashi’s creation, Baymax (Scott Adsit), an inflatable health care companion robot. Hiro is then certain he must attend the same school as his older brother, but when a tragic accident takes place, Hiro’s attention and goals shift to something far more vengeful. 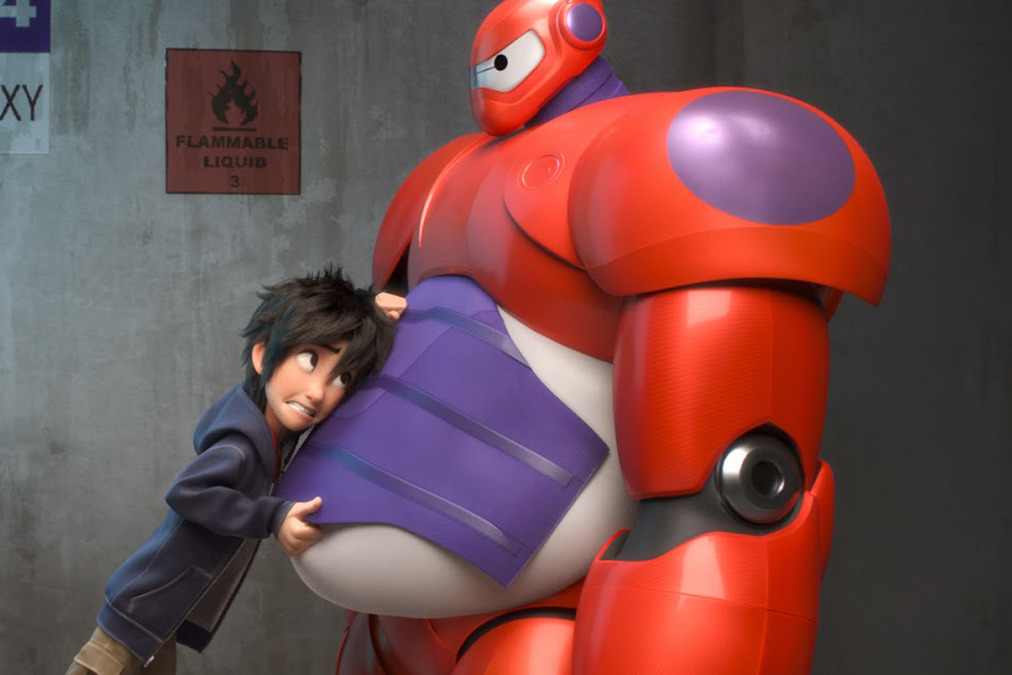 One can only imagine that Disney must have had a feeling not unlike second album syndrome having to follow up the monster hit that was Frozen, which is now the highest grossing animated film of all time. However, as Disney has now made over 50 animated feature films and the studio is no stranger to the high expectations the public puts on their films, this would not be a notion they have not had to deal with before. Big Hero 6 will no doubt receive inevitable comparisons to Frozen due to it’s incredible success, but it is a film vastly different from it’s predecessor and incredibly comfortable in itself.

While Disney purchased Marvel Comics back in 2009, this is the first real evidence of this union as seen in feature film animation. The comic “Big Hero 6” by Duncan Rouleau and Steven T. Seagle was first published in 1998 with little fanfare. The film itself is more an adaptation of the comic as some of the characters and their situations are changed to allow for a larger audience and the creation of an original and relatable screenplay. Marvel superheroes are usually known for their superhuman powers, which help them save the day and/or the world. The characters of Big Hero 6 may be animated, but the traits they possess are more realistic and relatable than those commonly associated with stereotypical superheroes.

Along with their high level of intellect, all of the characters in the film who are part of group Hiro assembles to take on the mysterious masked villain do not have super powers as such, but instead take full advantage of their individual talents and do amazing things with them. Not one of them can take on the villain by themselves, but when they all come together they do amazing things. This is an inspirational thought for real life. There is nobody who can conquer the world by themselves, but when they are part of a group of people who share their talents, that is when change can be brought upon. Nobody can be good at everything, but everyone has a talent for something and it’s the ones who make the most of that talent that reach their true potential.

Big Hero 6 also looks at the way people handle grief and the stages which they go through. While Hiro’s friends and Aunt Cass (voiced by Maya Rudolph) mourn in their own controlled way, Hiro retreats into himself for a time period before seeking revenge. In his heart he knows revenge won’t bring his loved one back, but in his grief he somehow believes it will bring on a change of some sort. These are feelings many who have experienced the same sort of loss will be familiar with and while they would not have gone to the same lengths as Hiro, will understand his actions. 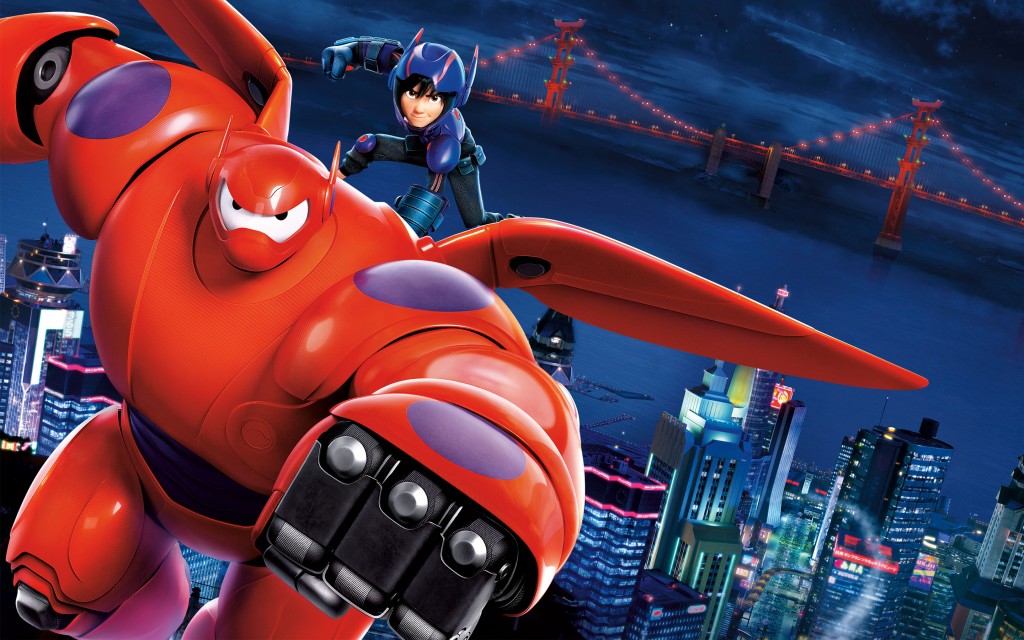 Big Hero 6 is a rather emotional journey for this reason, but also because of the depth of the friendship developed between Hiro and Baymax. Baymax comes to Hiro when he most needs him and is incredibly endearing and wonderfully lovable. He is a character so simple in appearance yet complex in creation. He is first and foremost a health care companion, but becomes the best friend Hiro could ask for which stems largely from his inbuilt compassion and wish to fix anything that may be wrong. Baymax gives the film some of it’s most tender moments and also some of the most amusing moments, such as when his battery running low resembles tipsiness. For the character’s simplicity in design, the connection one feels to him by the end of the film is outstanding.

The animation employed in Big Hero 6 is truly outstanding. The world of San Fransokyo in which Hiro and his friends exist in is truly brilliant and completely intriguing. San Fransokyo is the mash of San Francisco and Tokyo and contains features from both cities, including several recognisable landmarks and landscapes. When the film begins, the city looks remarkably like San Francisco from the bay views, but as it zooms in on the city it resembles more the busy streets of Tokyo. An incredible amount of detail has gone into every visual aspect of the film and every passer on the streets in the film has their own individual genetic make-up. 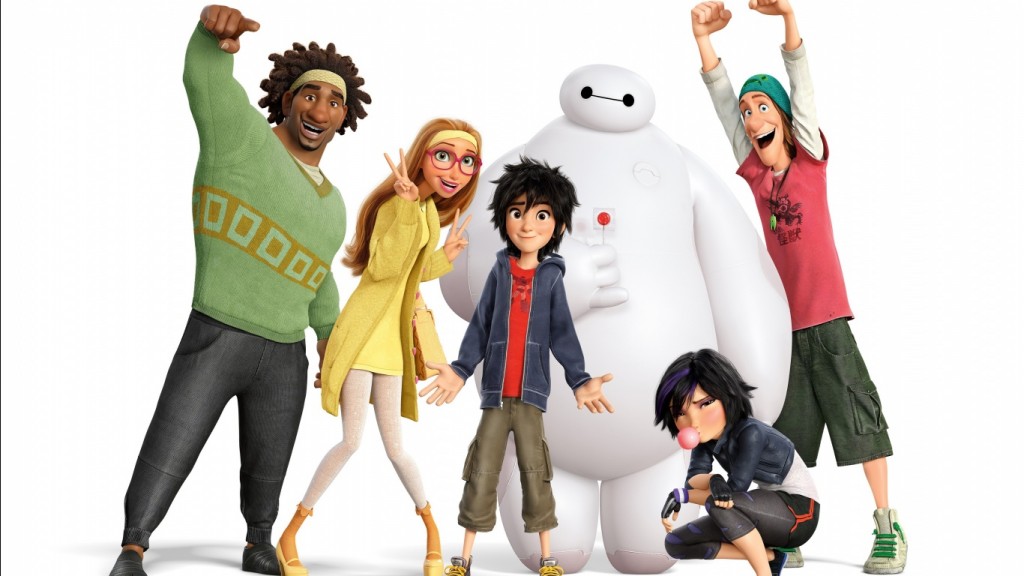 However, coming out of Big Hero 6 one has the feeling that the film would lose something on it’s second viewing. Like all good superhero films, there is an excitement to the first viewing and a thrill which isn’t enjoyed as much the second time around. It isn’t the fact that the unpredictability is gone with a second viewing, but more that the emotional impact and intrigue and excitement associated with the story itself doesn’t transcend into future viewings. Yet the appreciation for what the film is trying to say remains. Big Hero 6 represents a successful union between Disney and Marvel and has something for both young and old and male and female audiences. As is expected from Marvel films, it is well worth staying till the end of the credits.

Summary: Big Hero 6 represents a successful union between Disney and Marvel and has something for both young and old and male and female audiences.