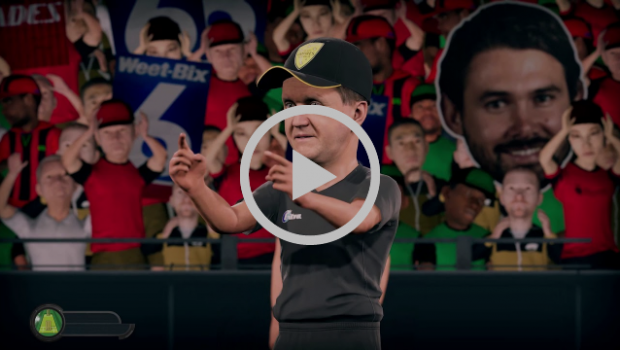 Big Bash Boom, the big hitting, big-action, laugh-a-minute arcade tie-in to this years’ KFC BBL Big Bash T20 and rebel WBBL cricket tournament, is now available in stores. Take control of your favourite teams and bring them to championship glory… with a taunt or two along the way to let your opponent know who’s winning.

Developed by Big Ant Studios in Melbourne, Big Bash Boom is available exclusively on PlayStation 4, Xbox One, Nintendo Switch and PC. This next-generation arcade game features no micro-transactions or additional purchases. Families can buy once and play forever without needing to spend another cent!
“Big Bash is Australia’s favourite summer sporting event,” Ross Symons, CEO of Big Ant Studios, said. “It’s pure fun for the whole family and we wanted to make a game that everyone can have a great laugh playing together, regardless of skill.”

In addition to the power-up-filled madness of hitting big sixes out of all the fully-licensed home stadiums that will feature in the Big Bash T20 competition, Big Bash Boom also features all the players of this year’s season, complete with big bobble-heads for additional laughs. Unlockables are a big part of the experience, and fans will be able to deck their players out with everything from watermelon helmets to swapping a potato or pie for the cricket ball.

There are also 65 celebrations to unlock and use in-game. When you’ve hit that huge six, you’ll be able to make sure the bowler knows it. Just don’t get out for a duck, or Boomer the Duck will be there, waving you off.

“As the Big Bash season gets under way, we’re delighted that fans can experience the fast-paced action and entertainment at home in such a fun and exciting way,’ said Anthony Everard, CA’s Executive General Manager, Fan Engagement. “Big Bash Boom is the perfect accompaniment to our biggest ever summer of cricket.”

The game is available in store now.