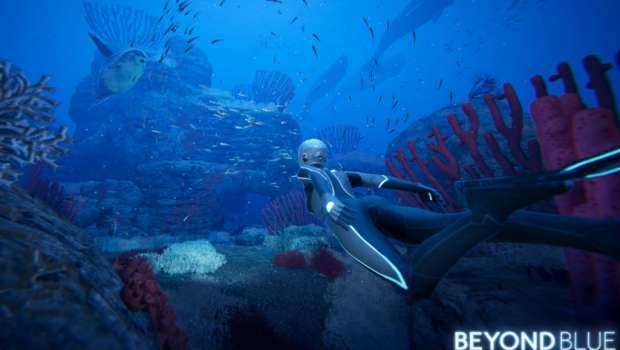 Set against the near-future backdrop of Earth’s oceans, Beyond Blue features the scientific support of real-world exploration and outreach initiative, OceanX, and embracing its minimally invasive exploration techniques. It tells the story of a crew of scientists – led by oceanographers Mirai and André – who set out to test their “Ocean Sense Network,” which has the power to literally shine a light on the unexplored depths of the ocean as they unravel its endless mysteries.

Focusing on the Western Pacific Ocean amid a large multispecies gathering of cetaceans and other creatures, players will step into the shoes (and flippers) of Mirai, as they use technology to better understand the urgent threats facing these blue depths. At the same time, Beyond Blue will feature never-before-seen footage licensed from BBC Studios’ Blue Planet II, expanding upon the game’s story and educating players about the social and emotional lives of these whales – the creatures with the biggest brains on the planet.

“We are extremely excited to share Beyond Blue with everyone,” said Michael Angst, CEO, E-Line Media, Creative Director for Beyond Blue. “We have taken care to craft a visual and audio experience that immerses players in the beauty of the ocean and the amazing creatures that inhabit it, while hopefully doing so with some interpretation and artistry.

“Players will explore diverse environments ranging from a sun-dappled, oasis-like atoll down through the gauzy blue ‘twilight’ zone where only the faintest amount of light reaches to the midnight of the abyssal zone, where rarely seen creatures produce their own light in an environment otherwise devoid of light.”