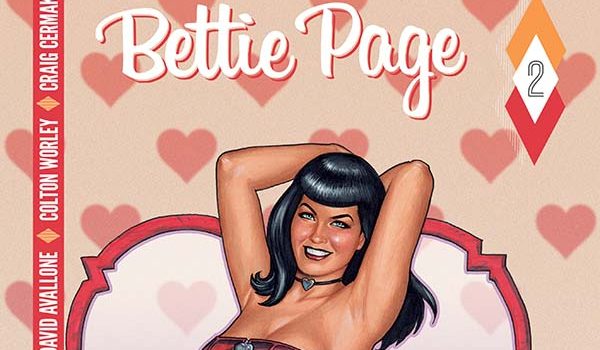 Summary: Straight out of the era of pulp magazines and B-movie glory comes Bettie Page #2 firing on all stereotype cylinders... a good cheesy bit of fun.

Bettie Page is one of those names that you’ve probably heard even if you don’t really know much about her. She made such an impact on pop culture that she is a reference that can be dropped into many conversations and without a wealth of knowledge, people will generally know what you are on about. She was a woman with a strength about her, sure she posed naked and developed a following for her B&D images and so on… but she was also a brave woman with an impressive education who overcame a lot to get where she wanted to be. Though her images made her famous beyond even what perhaps she expected, she liked to maintain her privacy and as such when asked if she was Bettie Page she would respond “who’s that?” This may have lead to some of the comic stories written about her suggesting she was actually an undercover government spy. 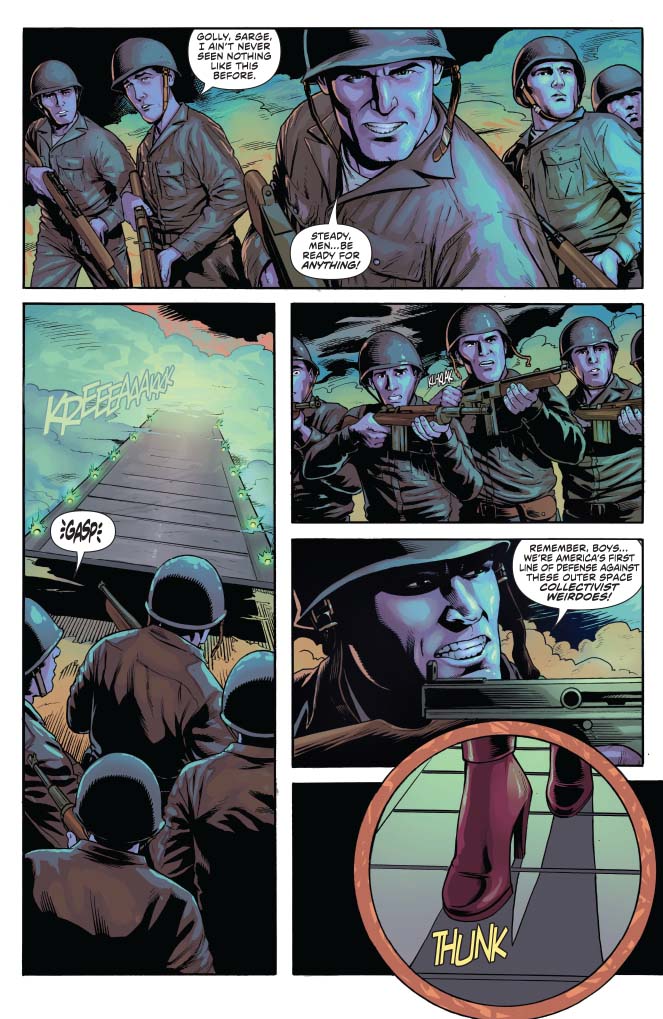 As mentioned Bettie Page was somewhat of a mystery figure and so suggesting that she was working for the American government isn’t too big a stretch. In Bettie Page #2 Bettie is living the life of a B-Movie Queen, starring in a movie Queen of the Space Commies. But before long fantasy and reality collide and Bettie is forced to take action to defeat the evil forces… but will she succeed in taking them out or will things get even more out of hand? There are plenty of elements that just scream stereotype of the era but that is exactly what makes this fun. It’s light hearted and cheesy just the way it should be. 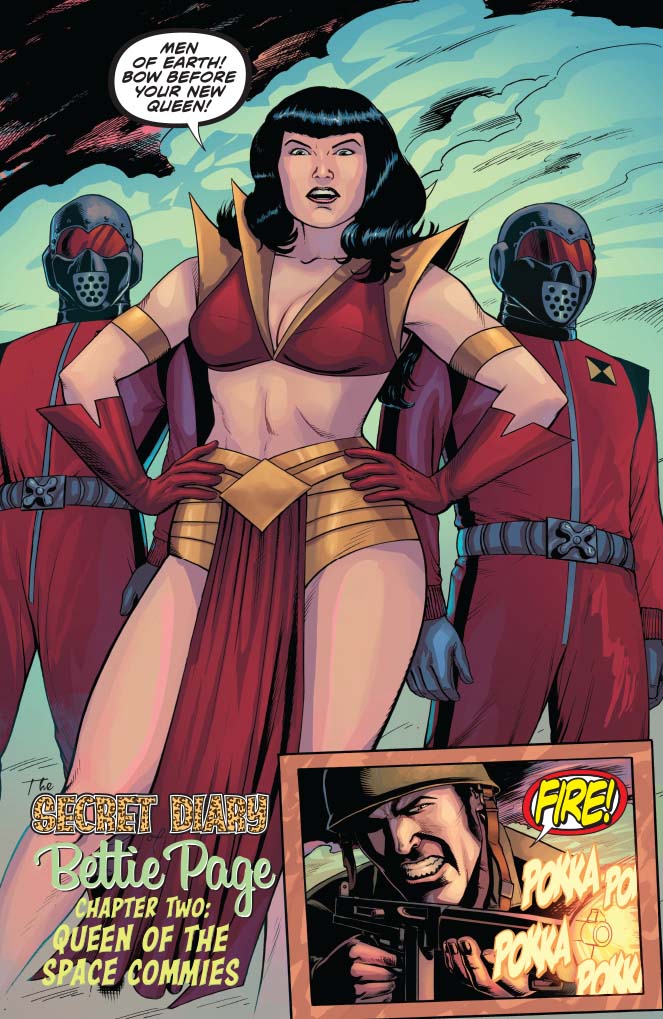 In depicting Bettie Page, the hair seems to be the go to thing to get right… if you can get the hair right then you’re about 90% there. Flicking through the pages of this comic you can see that it’s Bettie on the pages and there’s a certainly playfulness to her that sets the tone perfectly. Joseph Michael Linsner’s cover reminds me of the classic Olivia De Berardinis which is exactly the sort of image that Bettie Page inspired and made her own. 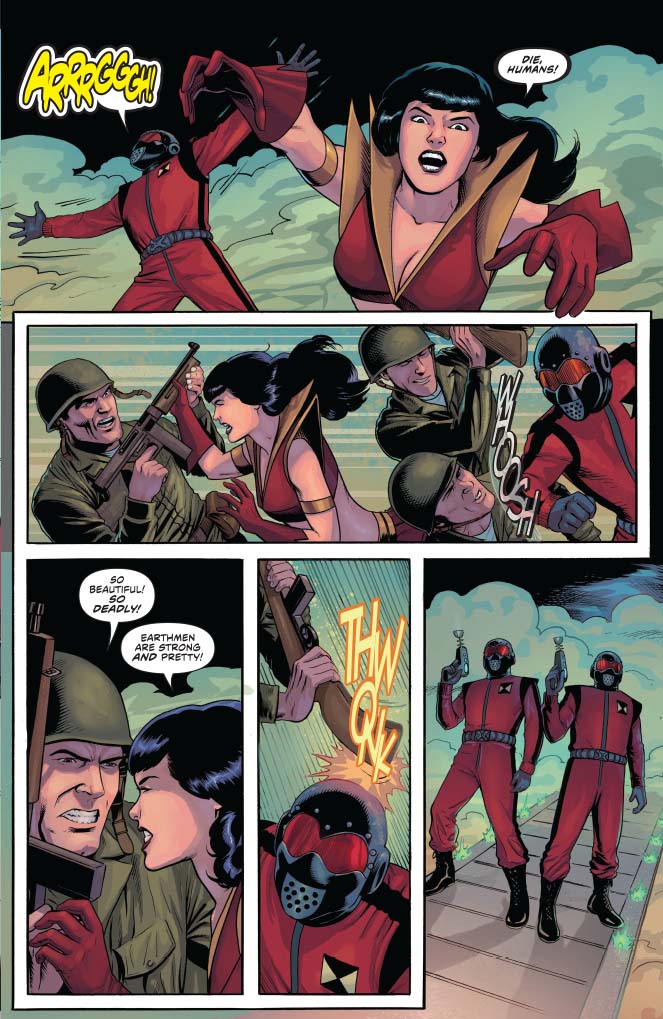 If you want a bit of light hearted fun, cheesy 60’s stereotypical schlock sci-fi with espionage and action thrown in… you may just enjoy this. 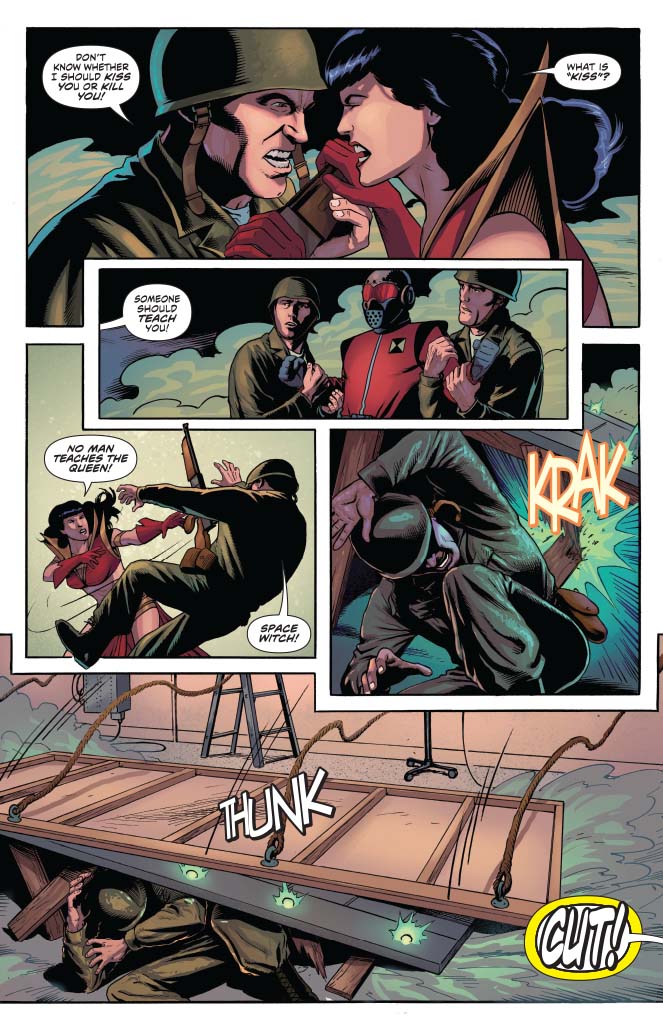