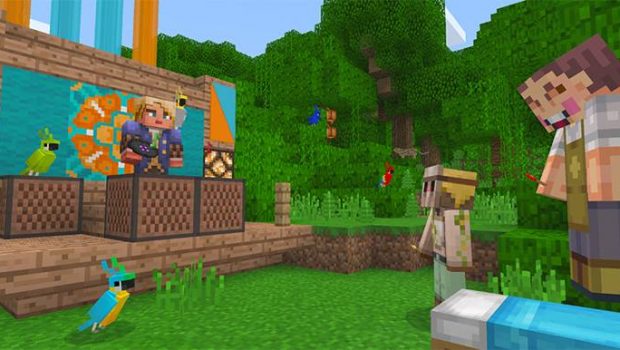 BETA TEST BETTER TOGETHER! Check out the beta of the new cross-platform Minecraft

As you may have heard, we’ll be soon releasing the Better Together update – the first step in our plan to unify versions of Minecraft for console, mobile and Windows 10. That means players on those platforms will be able to join each other in-game, create, cooperate or compete together on massive servers, and access whatever swish skins and Marketplace adventure maps they own on any of their compatible devices. You can read more about the fancy features coming with the update here.

If you own Minecraft: Xbox One Edition or Minecraft: Nintendo Switch Edition, you’ll receive the brand new version of Minecraft for free (and, don’t worry, if you’re attached to the old console version, you can still play that too). To make sure it’s all going to work properly, however, we’re rolling out a beta on Windows 10 and Android today, with Xbox One beta access to follow in the coming days!

As with all betas, the purpose is to help us stress-test what we’ve built so far and uncover any bugs so we can squish them before the official launch. So: expect some things to go wrong! It’s all part of the process of making sure they go right in the future!

The pay-off is that you get an early glimpse of the cool stuff we have lined up, like fireworks, parrots, armor stands, the recipe book, new game rules and – stealing the show entirely – the amazing, the one and only, the ultimate COARSE DIRT.

We’re not releasing all of Better Together’s planned features in one go, however. Servers aren’t yet in the beta (although the servers tab might look like it’s searching for them). We’ll add them in as they become ready. Meanwhile, Marketplace is in the Android, Windows 10 beta, but is yet to be confirmed for the Xbox One beta.

But the important thing is that you can still get in on that sweet COARSE DIRT action. Scroll below to see how!

We also made loads of tweaks. Here’s just a few: player limit has been increased on higher end devices, you can hold maps off-hand now, ice-blocks are transparent and you can change your skin from the pause menu. There’s so much more, not even including the list of bugs we fixed (such as correctly reorienting the moon). For the full changelog, please visit http://aka.ms/mcchangelogshttp://aka.ms/mcchangelogs.

WANNA TEST IT? HERE’S HOW!

You will need to own the digital version of the game. For the beta, disc owners are not supported – sorry!

Joining the Minecraft Beta on Windows 10 or Xbox One:

Head over here for a breakdown of how to access betas on Android.

We’d love it if you could report any bugs at bugs.mojang.com & please let us know what you think about the beta by pressing the feedback button in the game or visiting feedback.minecraft.net.