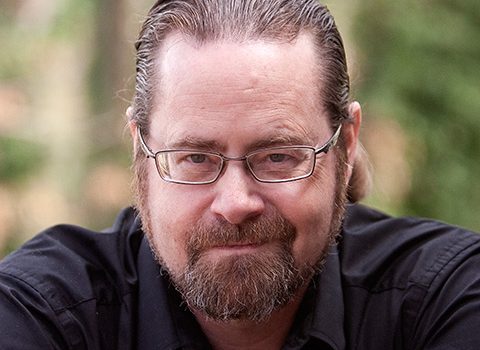 An important message from writer Christopher Golden about his friend James A. Moore who needs help with his healthcare…

I could tell you about the work and career of James A. Moore (and I will). I could tell you that for twenty-five years, Jim’s been producing beloved works of horror and fantasy. His earliest work appeared in Marvel’s comics exploring the universe of Clive Barker’s HELLRAISER and he was one of the primary contributors to White Wolf Games massively popular WRAITH: THE OBLIVION and WEREWOLF: THE APOCALYPSE, and other World of Darkness volumes. Over the course of his career thus far, he’s written dozens of original horror and fantasy novels, from his landmark SERENITY FALLS to his brilliant grimdark fantasy series SEVEN FORGES, and been nominated for multiple awards, including two Bram Stoker Awards. He’s written media tie-in novels in the ALIEN, PREDATOR, and BUFFY THE VAMPIRE SLAYER universes, among others. And if you’re familiar with James A. Moore from his writing, that’s wonderful.

But there’s a lot more to the man than the words he’s written down. Equally important are his spoken words, the hundreds of writers he has coached, mentored, inspired, and even threatened to get them to “sit their asses in a chair and write,” to “finish the damn book.” I’m not going to write a bunch of stuff that will make Jim uncomfortable (he’s uneasy enough with the very idea of asking for help because if nothing else, he’s a stubborn old mule). What I will tell you is that Jim would be the very first person with a hand up to volunteer if someone else needed help…and he often has been. Now, he’s the one who needs help. As I’ve said elsewhere, Jim has a lot of books left to write, but at the moment, cancer’s getting in the way.

I’ve included much of the text of our GoFundMe appeal below, but updated with the latest information from my visit with Jim today. If you’ve ever enjoyed work of Jim’s, or of mine, or you just love books or comics, or you just want to rage at the injustice of our health care system, I’d be deeply grateful if you’d consider donating to this GoFundMe. Whether it’s $5 or $50 or $500, the help is appreciated.  As someone wrote in response to my original post about this GoFundMe, our system is broken, but our community is not. It’s a shame that we need to crowdfund our health care, but it’s a testament to the good that remains in the human heart that we do.

You can keep reading, but if you’d like to skip right to the GoFundMe page, here it is:  https://www.gofundme.com/f/please-help-author-james-a-moore

Thanks, so much, for reading.