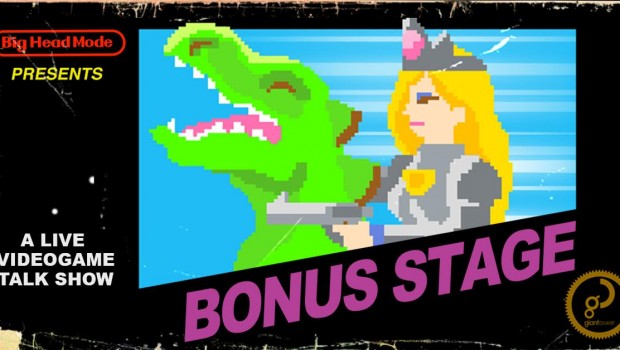 Tell us how you became involved with Bonus Stage?

Well it was something Carlo and I have talked about doing for a while, some kind of comedy or variety show for gamers. We already do a weekly radio show called Big Head Mode, so we were used to filling an hour with gaming talk. But since we’re both involved in the Sydney comedy scene, we realised how fun the show was when you had gaming comedians as guests. We got told by a lot of guests how fun it was to be able to crack jokes about stuff that is normally too niche for them to talk about on stage in stand up.

Carlo already had a strong working relationship with the Giant Dwarf Theatre from his work with Bear Pack, so one day he just pitched a gaming show and it evolved from there.

Walk us through your thought-process in how you organise the topics and shows?

It’s very much a collaborative process. We have some great writers, comedians, musicians and film makers involved. The writers will meet up and toss around sketch or segment ideas. Blake and Chris, our camera gurus, come up with amazing things to do in videos. Benny Davis and the Triforce cook up some excellent game covers and song ideas. With a show like this, the secret to success is just being surrounded by brilliant, hard working people.

What’s been your most challenging aspect so far?

Well it’s a big show with a lot of moving parts. It’s just inevitable that some things will go wrong. Maybe a guest has to pull out, maybe a screen isn’t working on the show night. It’s just the nature of live performance. So planning a big show when there are so many variables can be tough. But it’s such a fun, relaxed show that even when things go wrong, we still find things to laugh about. We had a show, where the powerpoint just refused to work. So while I was off stage trying to fix it, Benny Davis and the house band played relaxing elevator music while Carlo took the time to chat to the audience.

For me there are two things… Just being able to sit back and see the many different things come together. It’s one thing to plan segments and ideas in a writers meeting or an email thread. But being able to sit back and watch Seaton Kay-Smith do a routine as the owner of a Pokemon Animal Shelter, followed by an acapella version of the Dam Level music from Goldeneye… The gamer in me will never stop geeking out over things like that. And the other thing is the fact that after the show is done, we can all just go and play video games and have some drinks with our audience right there in the theatre. It’s a really awesome way to come down from a high energy show after a month of planning.

Bonus Stage seems to be favouring Sydney… when can we “Southerners” (aka Melbourne) expect to see the show?

It’s definitely something we’ve talked about. The beauty of doing a gaming comedy show is we’ve got a show that could fit in quite easily at both comedy festivals and gaming events, and these days there are plenty of both. We’re still playing around with the show format a bit to find that sweet spot, and we’re always trying new segment ideas. So there are no concrete plans when we’d take the show on the road, except we definitely want to. And it’s safe to say, when Melbournians or anyone else gets to see the show in their town, they’ll probably be getting a more refined version anyway, so it’ll be worth the wait. Think of it as a Game of the Year Edition. 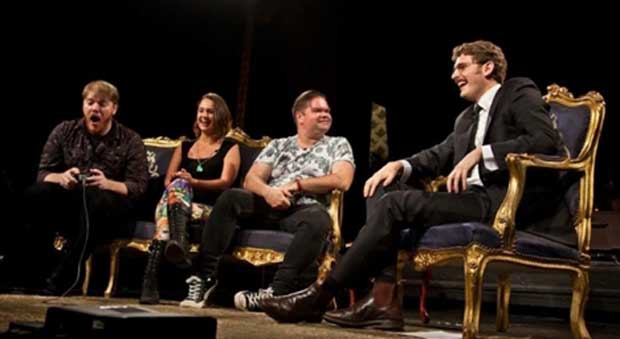 Do you have anything planned for PAX AUS? (If it’s a secret, we won’t tell anyone)

Come on, surely that would be a spoiler… All I’ll say is “ambiguous winky face emoticon”

Gaming… why is gaming the bomb?

For me, it’s all about the fantasy and immersion. I love how games can put me right in the moment of whatever world they’ve constructed. You could be Batman, standing on a rooftop about to swoop down, feet first, into some goons face. Or a GTA Online crew setting up the perfect heist.

I grew up on a lot of Sega games. Alex Kidd, Sonic the Hedgehog, Earthworm Jim. My older brother and I used to run straight into the games room after school, with a box of Miniwheats, and play Sonic the Hedgehog, eating the cereal straight out of the packet. I spent a large part of my childhood as Tails to my brothers Sonic, being left off screen constantly. It was a big day when he finally let me play Sonic. Of course, I probably sucked at it since I was used to being invincible and being able to fly but hey, we’ve all got to start somewhere right?

Some of the most multiplayer fun I’ve ever had in a video game has been Grand Theft Auto Online. It’s become something of a Bonus Stage ritual for Carlo and I to try and entice every member of the show into our GTA Crew. We’ve got about half of them so far and we’ll often while away the hours planning our own heists, hunting each other for sport or simply flying planes into the sunset until they crash into the ocean. One of my favourite things we ever did though was all wear matching pig masks, parachute down into the city, landed next to some random player and then in unison we all began shrieking and pointing at him, while slowly circling him. I’d give anything to see what that would have looked like from his point of view. But doing ridiculous stuff like that is some of the most fun I’ve ever had in a game.

What about rage control?

Back to Bonus Stage… can you explain what darkest secrets are revealed?

Well one of our guests is Dr Oliver Sox, a renowned psychologist to the video game stars. He’s written a tell all book about many character from the gaming world, so he’ll be divulging many juicy details about them. Why does Kirby eat compulsively? Why does DK hoard so many bananas? We’re going to get some real insight behind the minds of many of our favourite characters.

Who’s your favourite gaming character and why?

Earthworm Jim. He was the first really funny character I ever encountered in a video game. What’s not to love about an earthworm living in a super, bionic suit? He used his own worm body as a whip and his best friend was a ball of snot. As far as I’m concerned, we’ve yet to see any game come close to that level of excellence.

Lastly, what can the audience expect to experience in your latest Bonus Stage event?

As always, it’s a real mix of things. We’ve got Kara Jensen-Mackinnon joining us, a comedy writer and Tetris expert, we’ll be talking to a former Lemming, Benny Davis and the Triforce have some excellent music all based on games with cool, female protagonists and we’ve got a very special surprise segment planned with Bonus Stage regular Rae Johnston. And to top it all off, after the show we’ll have the excellent Indie RPG multiplayer game Dungeon League for people to play (plus some free Steam codes to give away!).

Thanks Ben and all the best for Video Game Characters Darkest Secrets Revealed! (At Bonus Stage)

Live in Sydney? Or want to fly to Sydney to see Bonus Stage? Check out https://www.eventbrite.com.au/e/bonus-stage-tickets-17538597417 for ticket information!