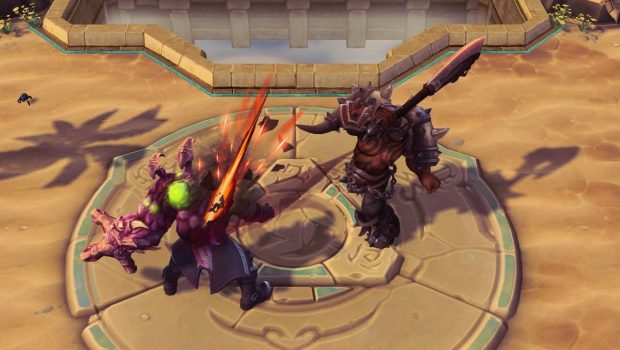 Behold! The drums of war herald the arrival of Garrosh, the Nexus’ newest Melee Warrior!

Throughout the history of Azeroth, there are few mortals of greater notoriety than Garrosh Hellscream. A powerful warrior and tactician of the Horde, Garrosh was heralded as a hero of his people after having successfully countered the armies of the Lich King during the Warsong Offensive in Northrend.

In his youth, Garrosh was burdened by the spectre of his family’s legacy. His father, Grommash, was the first Orc to accept the demon Mannoroth’s blood, in a desperate bid to empower his people. In time, Garrosh’s self-doubts were allayed as he came to know of his father’s sacrifice and eventual redemption. As he grew in stature, Garrosh developed into a confident and capable warrior, eventually leading the Horde into battle. Just as his abilities evolved, so too did his ambition… and his penchant for violence. To a fault, he stayed true to the original tenet of the Horde Invasion Forces: conquer all, or die trying.

Now, this proud and fearsome warrior has crossed over into the Nexus, seeking to champion his cause by challenging all who would stand in his way. For Garrosh Hellscream, there can be no peace. There is only victory… or death.