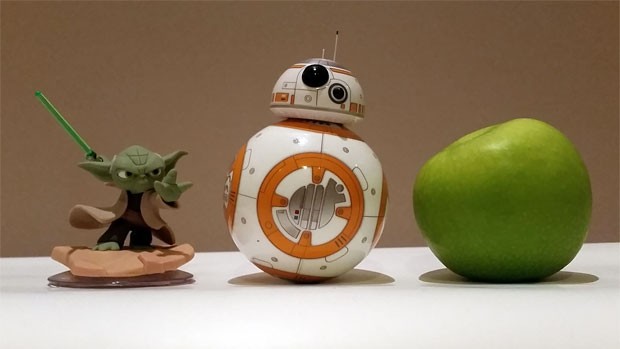 BB-8 Droid by Sphero (The Review)

Summary: One classic and slightly twisted Star Wars reference sums up the BB-8 best… “This is the droid you’re looking for!” with some great fun features

Star Wars The Force Awakens is only just a few months away but something else from this franchise has gone viral and this is the BB-8. In one of the original trailers for The Force Awakens, this little classic looking Star Wars droid made its world-wide debut and robotics company Sphero have faithfully recreated this cute little character from the film which is fully interactive.

By connecting the BB-8 to your smartphone, you can perform a variety of functions with this droid, including the ability to talk with it and create holograms thanks to your phone. You might also be thinking that this is just a gimmick but once in your hands, you will soon realise just how amazingly cool the BB-8 is which successfully mimics the droid from the trailer, albeit considerably smaller. 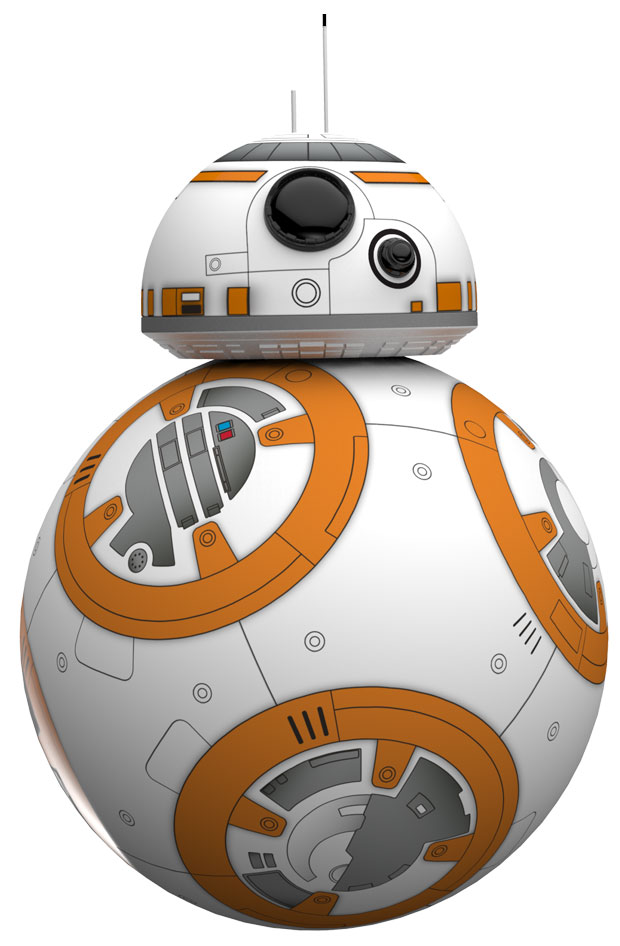 The droid itself measures at around 90mm in height (head included) with its spherical body measuring at 70mm in diameter. It even has that “floating” head which captivated millions of people around the world and in terms of design, Sphero should be commended on replicating such as interactive product. In Australia, the BB-8 retails for around $249 which may seem a little steep but the product is a perfect replica that matches those high-end Star Wars memorabilia products like lightsabres or Darth Vader masks.

The head of the BB-8 is also held in place by a magnet and depending on what it encounters in the real world, it’s quite sturdy, although it did fall off on a few occasions due to my bad driving. Inside the BB-8 is where the magic happens which makes this droid spin around your home or office, just like the film thanks to its mechanical motors. 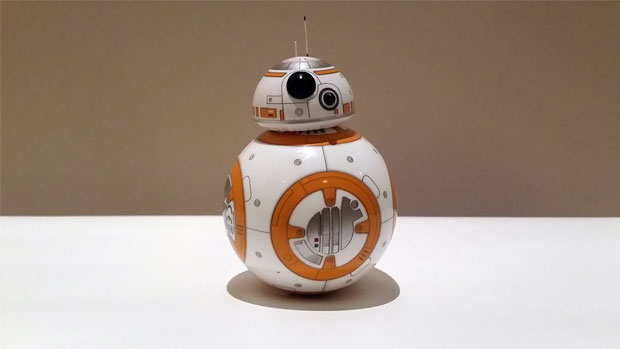 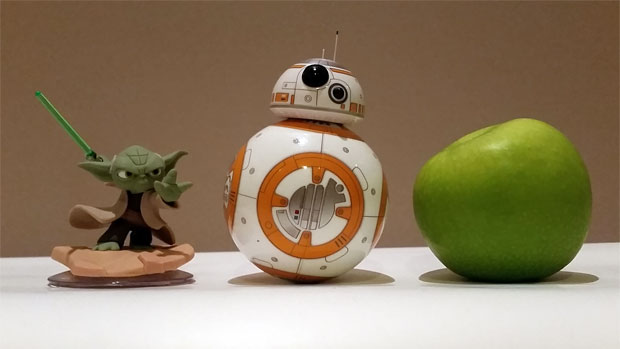 It’s powered by an internal battery which boasts a charge of around 60-minutes which uses an induction charger. So by placing the BB-8 on its charger, it automatically commences charging. There is a micro-USB port on the charging base which connects to a USB either via your computer or mains. The base will also inform the user when it’s charged thanks to its three blue LED’s and a full charge takes just over a few hours.

To see the BB-8 in action you need to download the free app called “Sphero BB-8” which allows you to interact with this droid and is a very intuitive app. As the BB-8 is powered by Bluetooth, the setup is extremely minimalistic and requires you to scan the BB-8 once it’s on the charger which actually pairs this item to your smartphone. To wake up the droid, you hold your phone to the BB-8 and after a few seconds, it will pair with your phone again. Very easy! 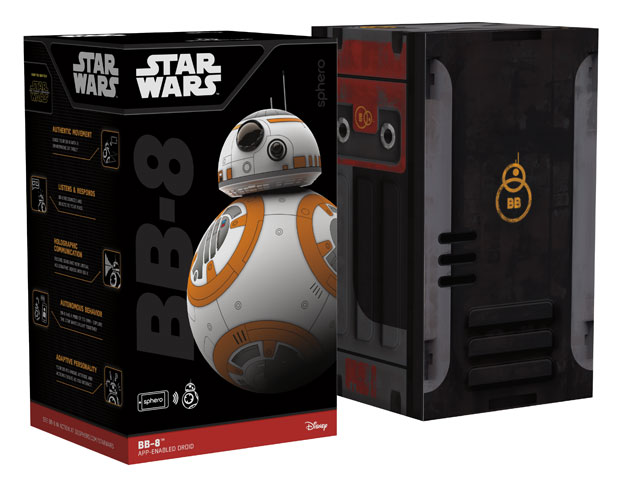 As mentioned, the app itself is very well designed and even features a snippet of classic Star Wars music which really gets the excitement happening! The app has four sections that include Drive (Take control of BB-8 with your smart device), Message (Record and View holographic messages), Patrol (Send BB-8 to explore on his own) and finally Settings (Adjust Global Settings). There are a number of options under setting such as sounds, firmware information, diagnostics and even a demo mode.

Controlling the BB-8 with the app in drive mode supports a range of up to 30metres and to control you simply push which direction you want the robot to go thanks to the virtual pad. There is even a speed boost option which makes the BB-8 go even faster and this is achieved by pushing down on the speed icon. Apart from controlling it on the floor, you can even turn it around via the rotate function which helps in driving it in the right direction. The drive mode even allows you to select a handful of animated responses which is great for interacting with other people or animals!

The patrol option is similar to those vacuum robots which basically moves around your room or house and although it knocks into quite a few things, it does memorise the path once its patrol is finished. With that said, the BB-8 works best on hard floors like timber or tiles, however it can move on carpet as well but it does lose some of its speed on that surface. So controlling the BB-8 is quite easy and most users will pick up the control mechanics in just one or two sittings and I wish drones were this easy to control!

The patrol even keeps a distance of where it has travelled and when it does knock into something, it displays a Storm Trooper icon which of course is the enemy and the sounds of the BB-8 comes directly through your smartphone which even says a droid-like “uh oh” when it knocks into something too many times. To make this product perfect, it would have been great if the audio came directly from the BB-8 but nonetheless, the sounds via the smartphone are still decent. 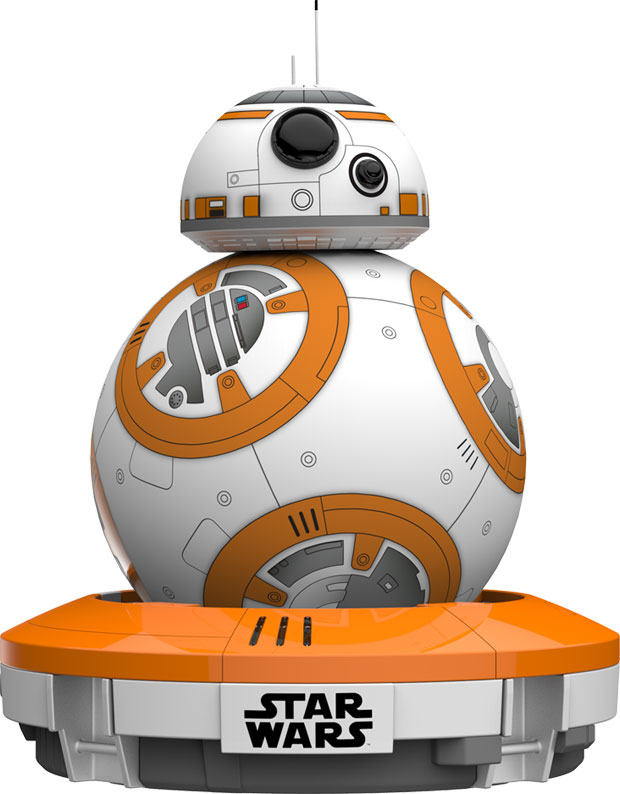 Given that, it patrolled quite a large area which included a kitchen, lounge room and hallway without getting stuck whatsoever. However its head did fall off on a couple of occasions but it kept on going.

As mentioned, the BB-8 does have a message capability but unlike Star Wars with Princess Leia and her famous “Help me Obi-Wan Kenobi, you’re my only hope”, the hologram feature uses augmented reality which displays the message via your smartphone. It’s a cool little feature that I’m sure quite a few people will enjoy but it is a little limited.

Voice commands on the BB-8 are quite rudimentary and by saying “OK BB-8”, it becomes alerted to the user where you can then instruct it with some minor instructions like (wait for it) … “it’s a trap” as it scuttles in another direction. Voice commands were only available on the iOS during the initial launch of the BB-8, however the latest app upgrade for Android will initiate this feature on those devices. The list of voice commands are listed below;

One classic and slightly twisted Star Wars reference sums up the BB-8 best… “This is the droid you’re looking for!” and yes, this robot is a gimmick but it features some great interactivity that both kids and adults will enjoy that also blurs the line between high-end replica and toy. Just be warned that its plastic case is not made of steel so you might want to ensure that BB-8 stays on the ground floor. But apart from that, the BB-8 is a brilliant toy and is easily the best interactive toy from the Star Wars franchise. 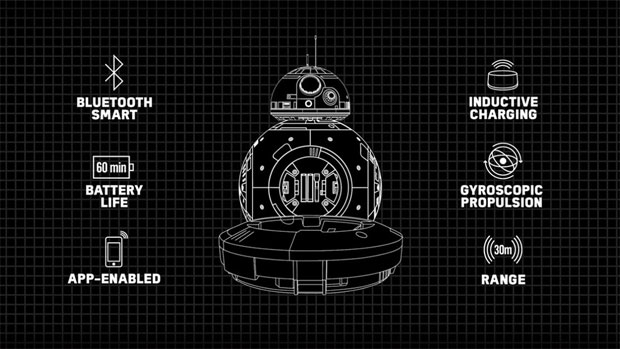