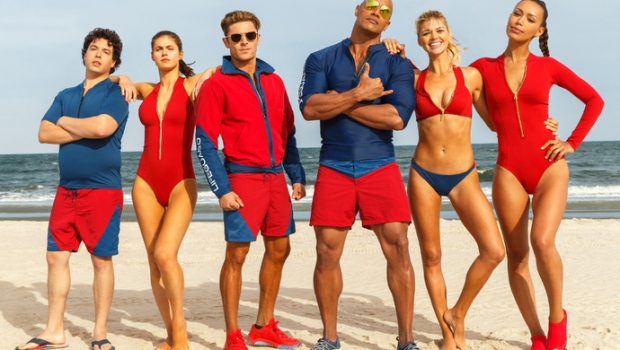 Anyone who’s familiar with the original television series Baywatch (1989-2001) was left scratching their head at the thought of a big screen adaptation of the popular, but completely outdated sun soaked series. Most notably the show launched the careers of Pamela Anderson and David Hasselhoff (which in turn propelled him into singing super-star in Germany). The original show had a rotating roster of bikini babes and muscular dudes splashing about on the California beaches saving lives and solving crimes.

Yes, the lifeguards also solved crimes in between bleaching their hair and toning their abs. Reality was checked at the door as soon as the dramatic theme kicked in (sung by Eye of the Tiger and Survivor lead singer, the late Jimi Jamison) with drums, a wailing guitar followed by silicone and sunscreen the show became an instant world-wide hit. So is it a surprise this out dated fossil of a show was dragged ashore for a modern reboot, remake or hopeless resuscitation? Of course not.

Director Seth Gordon first came to attention with an accomplished documentary called King of Kong in 2007. Going on to helm Four Holidays (2008), Horrible Bosses (2011) and numerous comedy shows for television, he has a proven ability to produce American-centric comedy. The original series of Baywatch was overtly ridiculous but in no way was it pitched or acted as a comedy (despite it often coming off that way). The long list of writers responsible for this modern film version have taken a tongue-in-cheek approach to the script but in doing so they’ve forgotten to add any original, clever or memorable jokes.

Sure, one shouldn’t expect highbrow comedy from a Baywatch reboot starring a former wrestler and a character referenced as “the vomit comet”; but this film’s credibility immediately drops during the opening scenes when we are treated to an unashamed rehash of the “franks and beans” scene from There’s Something About Mary (2008). Prior to this scene we are introduced to Mitch Buchannon (played by Dwayne “The Rock” Johnson) who jogs along the beach he patrols as a lifeguard. Immediately we learn he is a man of the community and has forged relationships with absolutely everyone he encounters.  From the kids on the beach, to the local smart mouthed law enforcement, Mitch is “The Man” – and they won’t let us forget it. He has to pause throughout many scenes just to bro-down, high five or get involved with the locals anyway he can. 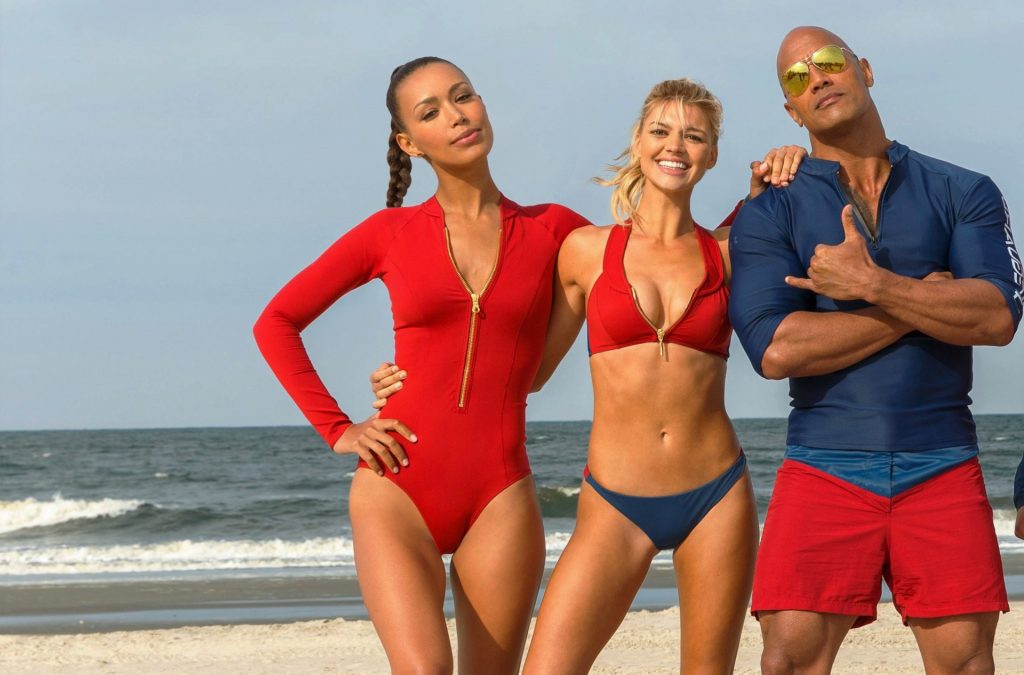 Johnson’s on-screen presence can’t be denied by his sheer bulk alone, he is a surprise but fitting casting choice for a modern-day Mitch Buchannon. The cast also includes Zac Effron, who plays disgraced former Olympic swimmer Matt Brody. Alexandria Daddario plays Summer Quinn, an accomplished wannabe lifeguard who is desperate to join the oiled up Baywatch team. Jon Bass brings some predictably written but well performed laughs as Ronnie Greenbaum. His character is obsessed with CJ Parker, originally played by Pamela Anderson, but here newcomer Kelly Rohrbach does her slow motion best with the character. Ilfenesh Hadera is given the least amount of dialogue as Stephanie Holden and plays it straight to whoever is attempting some sort of comedy next to her. Yahya Abdul-Mateen II (The Getdown, 2016) and Rob Huebel (I Love You Man, 2009) do a much-needed job in bringing some laughs to the support cast and judging by the out takes in the credits, a lot of their lines have been improvised.

After drugs wash up on shore our lifeguards go beyond the beach and their call of duty to uncover of a murderous and calculated scheme to take over the Real Estate of the “The Bay”.  Privanka Chopra plays the villain of the film with relish. The cast really seem to have fun with the film, and why wouldn’t you? It’s clearly not going for any Oscars, but throughout Baywatch remains a confused film. The opening scenes throw out so much bad language that it negates any family viewings and laughs are both bawdy and unashamedly borrowed. Some jokes fall so flat only the sound of overpriced popcorn scooping will be heard in the cinema and when the action hits it is almost cartoonish in nature (one scene has Johnson doing his best Wylie Coyote by using a firework as a rocket launcher).  Zac Effron is a standout from the main cast with his ability to deliver a joke with blank faced honesty. Anyone who saw his performance in The Paperboy (2012) would agree that since then he has been wasting his talent with a plethora of dull-witted comedies that leaves Bad Grandpa as the crowning jewel of cinematic idiocy upon his resume. 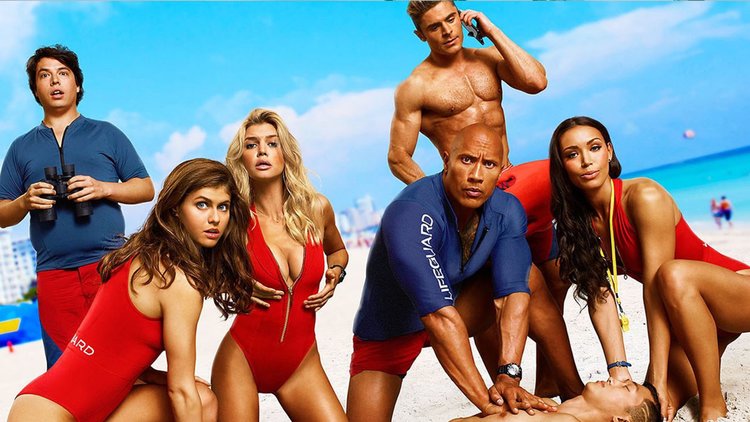 Despite its flaws Baywatch isn’t a complete wash out. At its heart the creators have clearly aimed for this film to be a fun but throwaway popcorn movie (with the now prerequisite barrel scrapping of a possible and completely unnecessary sequel) and it succeeds on that level, but not with much dignity. Staying afloat only due to the wide-eyed performances of the main cast and the laughs generated by the supports, Baywatch may make its money back by entertaining those needing something fun but completely dumb. As for the fans of the original series (if that is actually something that exists in 2017), there are more than enough winks to the camera to reminisce about Mitch and Co during this completely unasked for reboot, pulled from a show that is probably best forgotten.

Summary: The long list of writers responsible for this modern film version have taken a tongue-in-cheek approach to the script but in doing so they've forgotten to add any original, clever or memorable jokes.