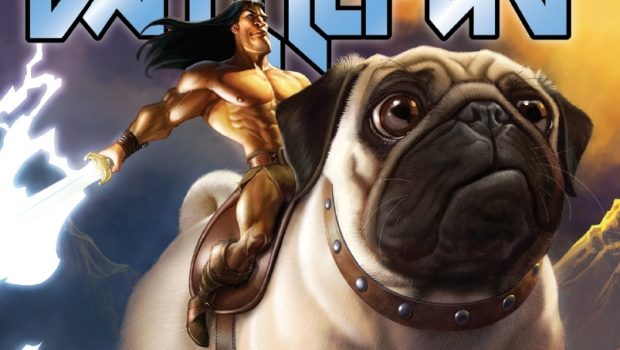 High adventure... and a pug!

From its humble beginnings in the northern village of Kinmundia, Mike Norton’s Battlepug is a story that starts out very familiar to those acquainted with a certain Cimmerian. But what begins as a retelling and parody of Conan quickly comes into its own and brings with it a cast of characters with impressive depth and substance. This is a tale of high adventure… and a giant pug!

The story starts with Moll telling a tale to her two talking dogs, Mingo and Colfax, about the last warrior of the Kinmundians and his fearsome battlepug. The warrior is very much a Conan type, with a similar tragic backstory and a focus on revenge. But while it zeroes in heavily on parody at first, it swiftly branches out and finds its own identity. The warrior (who is never referred to as anything other than “the warrior” or “the Kinmundian”) sets out to find the scarred man who killed his kin. He is soon joined—despite his protestations–by the giant pug that gives the series its name. Along the way he encounters a foul mouthed child plant mage named Bryony, a crazy and frail old man who sprinkles the words “scribbly” and “scrabbly” throughout his dialogue, and Black Sasha, a fighter who at first seems as though she’s just going to be a parody of Red Sonja but just as quickly proves that impression wrong.

So much care and attention is given to making every detail of this story work. The Kinmundian starts out as a Conan type, but he quickly evolves into much more than that. Even Scribbly, who I thought for sure was going to wind up annoying me, grew into his own as a character and brought with him his own secrets and surprises. Every character has depth and each is written with obvious loving care by the author.

Though the series starts strong with parody and focuses less on that aspect moving forward in favor of storytelling, that’s not to say it loses its touch for satire. There is an abundance of humor and light heartedness mixed into the more serious sequences of adventure, and almost any scene involving the pug is a recipe for hilarity. Partially because, despite his size, he isn’t presented as really monstrous. He’s just… a really big pug.

Even Moll, who seems at first to just be the tale’s narrator, comes into her own as a character. Her own story is brilliantly woven into the narrative, with subtle clues in both her environment and her interactions with her dogs.

Battlepug features a distinctive and engaging art style that both suits and enhances the story. Part of what makes the characters feel so fleshed out is how unique they are from each other, with their own style. The warrior is a powerful over-muscled barbarian type, Bryony is a small red haired kid always dressed in green, Scribbly is a frail and wiry old man with crazed features and horrendous teeth. And the pug. The pug is amazing. It never gets old seeing the “brap brap brap!” text bubbles next to that giant beast with its wide bulbous pug eyes and its pushed in face. Pugs look adorably stupid by default, and Mike Norton has done an amazing job capturing this essence in his work.

The scenes featuring towns and large establishing shots are highly detailed and contain tons of details that make it easy to just pore over them to appreciate the level of effort put into the work. Certain scenes also contain subtle details that provide clues as to what will happen next, without having overly much attention drawn to their presence.

If that isn’t enough for you, in addition to the Battlepug story itself, the Compugdium comes complete with a cover gallery, art gallery, and sketchbook at the end. The art gallery contains works by various artists in many different styles, and the sketchbook has notes written by Mike Norton himself, to give you a glimpse into the conception of Battlepug.

This is my first experience with Battlepug, and I can honestly say that I am now a huge fan. The art, the story, the characters all work so well, and everything builds to a suitably epic conclusion that just left me drooling for more. Brap brap! 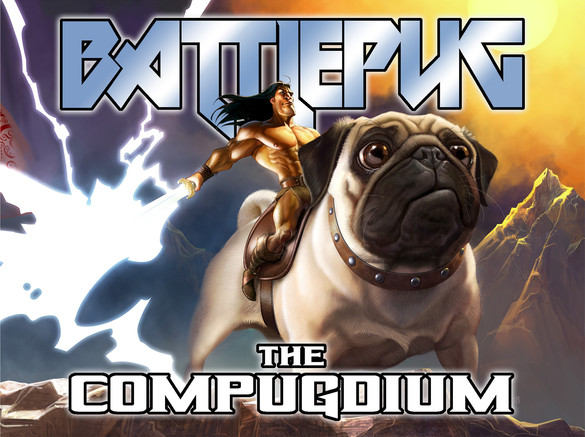