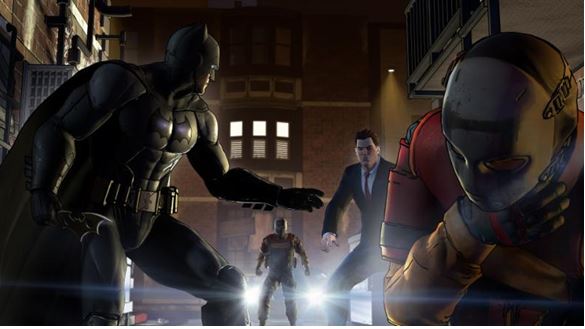 Today we can announce the release of BATMAN – The Telltale Series Episode 3: ‘New World Order’.

The third of five episodes in the season, Episode 3: ‘New World Order’ is available to download today on PC from the Telltale Online Store, Steam, and other digital distribution services, on the Xbox Games Store for Xbox One® and Xbox 360 worldwide, and on the PlayStation®Network for PlayStation 4 and PlayStation 3 in North America (SIEA territories). The episode is also available today for compatible iOS devices via the App Store, and for compatible Android-based devices via Google Play. The episode will be available October 27th for PS4 and PS3 in Europe (SIEE territories).

To celebrate this midpoint of the season, Episode 1: ‘Realm of Shadows’ is now FREE to download for PC via Steam through November 7th 2016, and is also free for compatible Android-based devices via Google Play.

Future episodes are expected to ship across all platforms during the same week, with Episode 4: ‘Guardian of Gotham’ launching in November, and Episode 5: ‘City of Lights’ completing the season in December. Specific dates and additional details will be forthcoming – stay tuned for more information.

In Episode 3, Penguin’s brutal attack broadcast on live TV has left Gotham City reeling. As Bruce and Batman, you’ll dig deeper into the web of intrigue surrounding the newly revealed Children of Arkham. Meanwhile, behind closed doors, the mysterious Selina Kyle reveals more of herself to Bruce. And in the aftermath of the attack, Bruce’s friend and Gotham’s new mayor, Harvey Dent, is a deeply changed man. Who can be trusted when the future of Bruce Wayne – and the Batman – could be determined by the flip of a coin?

Rendered to look like a living, breathing comic book, Telltale’s vision of Batman features an award-winning cast of talent, including Troy Baker in the role of Bruce Wayne,Travis Willingham as Harvey Dent, Erin Yvette as Vicki Vale, Enn Reitel as Alfred Pennyworth, Murphy Guyer as Lieutenant James Gordon, Richard McGonagle as Carmine Falcone, Jason Spisak as Oswald Cobblepot, Dave Fennoy as Lucius Fox, and Laura Bailey as Selina Kyle. Additional cast and characters will be revealed as the season progresses.

BATMAN – The Telltale Series Episode 3: New World Order is rated M (Mature) for Violence, Blood, Sexual Themes, Language, and Use of Drugs by the ESRB. Future content in the season is yet to be rated by the ESRB. The series is published by Telltale Games in partnership with Warner Bros.