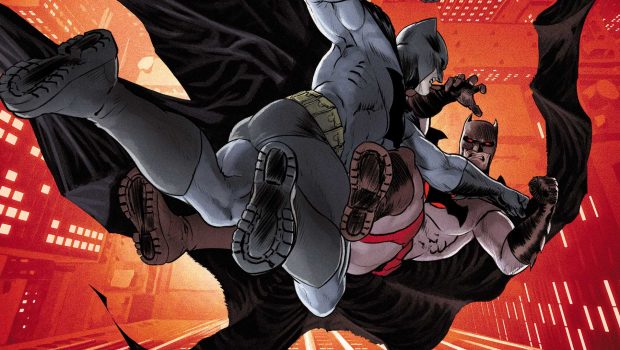 Summary: We finally find out how Thomas survived. For some reason though, King makes it a physical chore to read.

The Story: We see Thomas’s story in reverse.

Background: 1 more issue and Tom King’s run on Batman is done (sort of.)

Summary: Before we start, Tom King made the decision to show Thomas’s story in reverse. I’ll get to that a little later, but for this review, I will be going in chronological order of events and this will be happening in bullet points. The beginning of the issue starts with Thomas punching Bruce.

1. Thomas stands over his Bruce’s bed, swearing an oath to protect Bruce from a life of pain.

2. Thomas and Martha try and save Bruce from his gunshot in the alley as Martha starts to become unhinged.

3. Thomas tracks down Joe Chill and murders him.

4. Alfred lies dead as Thomas is racked with guilt as we see that Martha (as the Joker) has killed him because he wouldn’t help her find her pearls she lost in the alley that night.

5. Thomas (now as Batman) shoots the Penguin square in the face, killing him.

7. Thomas encounters his Selina and prepares to shoot her. She begs him to kill her, but surprisingly enough, he doesn’t. instead, he reveals his identity and tells her about Bruce.

8. In a nice parallel, we see Thomas and Selina discuss and argue over where they met.

9. In another panel filled page (this time five), we see the two fight the Ventriloquist, Thomas do push-ups, the two defeat Tweedle-dee and Tweedle-dum, stare at a portrait of Bruce, and take on Killer Croc. Thomas is not shown killing them. Selina seems to have had an effect on him.

10. The duo return from a night of crime-fighting and Cat is shot and killed by Martha.

11. Thomas lays in a bed talking to Bruce (but really, no one). He tells Bruce that his mother killed herself after finding out that our Bruce became Batman. This takes place after Flashpoint: Batman, but before Flashpoint 5.

12. Just after Thomas kills Eobard Thawne, Thomas is ready to die. He can’t live knowing that Bruce is Batman. The world whites out… and then comes back into view. We don’t know what saves it (Brainiac in Convergence?)

13. We see the scene from “The Button” where Thomas tells Bruce to be happy and not be Batman. Thomas then runs towards the light.

14. Except he is saved by Thawne, who purposefully saves him so he has to live with the fact that Bruce is Batman and Thawne leaves him in this reality.

15. In another 5 panel page, Thomas spies on the proposal, The Kent family and Bat/Cat at the fair, and Selina stealing the dress.

16. Thomas Walks in on our Joker as he lays in the church under all the rubble. He asks him how he found out about the wedding and wants a name.

18. Thomas pulls himself from the pit where he left Bruce.

The issue ends with Thomas telling Bruce to stay down.

Final call: Well crap. Tom King actually made me care about Thomas Wayne. This issue really does show a logical reason to why he doesn’t want Bruce to be Batman. He himself has suffered so much for it and is willing to carry the mantle for Bruce so he can be happy. The thing is though, he’s wrong.

First of all, Thomas just doesn’t understand the simple fact that Bruce IS happy. He has the family that Thomas was denied. He has the love of his life. He has a son. But most of all, Bruce loves being Batman. He has admitted occasionally to liking kicking the crap out of people. Thomas is so fixated on the Bat symbol that he can’t see anything else. Also, if he wants Bruce to be happy, he’s got a really screwed up way of showing it. Instead of just talking to Bruce, he spent months (in comic time), to breaking him down. Instead of telling him his story and working with his son, he kicked the crap out of him, left him a whole in the desert, and killed his surrogate father. Yeah, that should make Bruce really happy. Idiot.

Now that I think about it, I think Thomas is jealous of Bruce. He wanted what Bruce has and could never have it because in the Flashpoint universe, things just go sideways. He had a Selena and a woman he loved. They died (and one went crazy). He had an Alfred, he was murdered. He had a son (and Bruce had his parents) and they all died. Thomas probably looks at Bruce and thinks “Why does he get the family as Batman?” All this has sprung because Thomas is a jealous idiot.

Oh! Before I forget, like I said, the issues timeframe is told backwards. Normally when this is used, there is a reason for it. But nope! I think King just thought it was cool. It wasn’t. It was a pain in the ass to read. Reading the flashbacks back to front makes it much better.

This issue wasn’t nearly as bad as the past 2, but it still doesn’t crack adequate.

PS: Why was Skeets with Bane in issue 50?