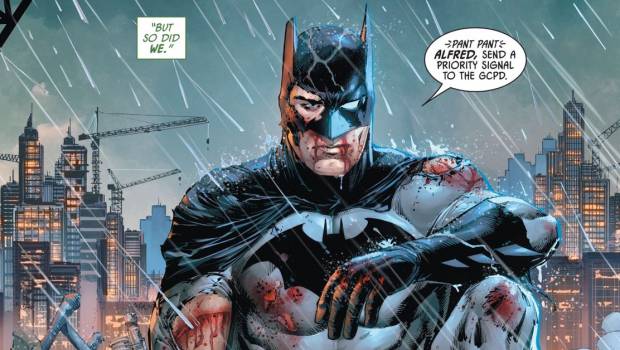 Summary: James Tynion's first issue does some pretty good things. We get a new car, a new plot, and just a twinge of Joker.

Selina's at a party bar, Bruce get's a new car

The Story: Selina gets handed a whole new mystery that Bruce must never find out about and Bruce beats the crap out of Deathstroke.

Background: A new era of Batman dawns as James Tynion IV takes over for the time being.

Summary: We open with Bruce on the Gotham rooftops, reminiscing about old drawings he used to make that Alfred called a “Gotham without a Batman”. Alfred would ask the question What would happen if you didn’t put on the that suit tonight?”

Meanwhile, we see a guy get poisoned to death (quite grisly if I might add), by a woman that turns out to be Cheshire. She enters a building and a into a meeting with Merlyn (a Green Arrow villain) and two new guys named Gunsmith and Mr. Teeth. Gunsmith has a lot of… guns and Mr. Teeth’s mouth is held open by dentist prongs, except that he apparently can’t open and close them, so his teeth just show forever. OK then. A mystery figure walks into the room and…

We are off to a fancy party! Selina meets with Mayor Dunch, providing a cover story for Bruce. The mayor is simply astounded by how fast Gotham is being rebuilt, to which Selina replies that Bruce most definitely has a plan for Gotham. Selina realizes that Bruce is there, up on the roof listening and they banter for a bit.

Bruce contacts Lucius to ask if it is ready. Apparently, Lucius now knows one hundred percent that Bruce is Batman. It is a new Batmobile that Bruce nicknames the Night Climber. Bruce has been prepared for 5 days to go after the Assassins Guild. He’s planned on how to beat them all… except our mystery figure from earlier who turns out to be Deathstroke. Deathstroke makes Bruce worry.

Batman yanks Slade out of the wall and as Slade tries to stop him his sword breaks on the cable. While Bruce and Slade tussle, Shadowcastersare released, which cast shadows of Batman against all the others, which lead them into one giant trap that Bruce designed. Slade draws first blood while…

Selina, now dressed in costume stops a man from uploading a virus of some kind to a set of processors. The man soon dies (being eaten inside out by acid, but not before having his body taken over by a mystery voice that can see Selina. He or she informs Selina that they very first plan Catwoman and 4 others enacted when they got to Gotham is now in full effect.

Meanwhile, back at the rooftops, Bruce has beaten Slade, and asks Alfred to send a signal to the police. After Lucius reminds Bruce that Alfred isn’t there, Bruce blames his lapse on a long night, and Lucius tells him that Commissioner Bullockis being informed of the situation. Then we see why the new Batmobile ahs its name. It climbs up the side of the building and after getting in, Bruce flies off into the night…

Until we get to another epilogue. The Joker has his men kill a bunch of heavies’ and then the men end up killing each other except for one, which the Joker does by remote detonator. All this because they know Joker’s plan and saw evidence of it. Bruce is in troooubllllllle.

For a first issue that comes after a momentous run, this isn’t half bad. I like the fact that Lucius officially knows Bruce is Batman. The family has opened up a little bit more. It’s also clear that Alfred’s death weighs heavily on Bruce’s thoughts. The scene where he calls for Alfred is so normal that for a fraction of a second I forgot Alfred was dead, until Lucius has the heartbreaking job to remind Bruce and us, that he is gone.

While the family seems to have grown larger, the fact that we don’t even hear anything about the rest of the Bat family is interesting. I hope that their situation gets cleared up soon. I’m not really big on the new Batmobile. It looks where too clunky (at least in crawling mode). The Shadow casters are definitely cool though and I’m surprised no one has come up with that idea before.

As for the Joker’s plan, I just… don’t care. Yes, Bruce is going to be him and yes something Joker does will change stuff for a while, but in the long run I’m kind of tired with Joker stories. Mind you, we don’t know what that plan is yet, but as of right now… meh.