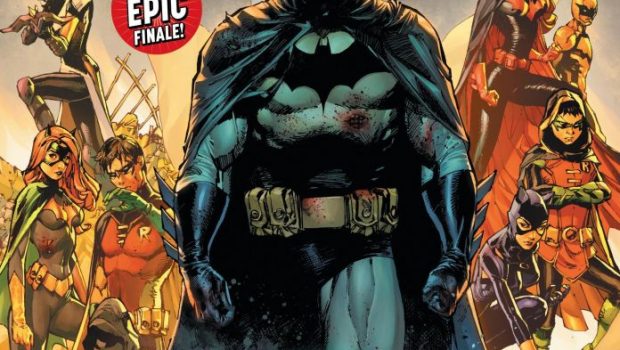 The Story: It’s finally over.

Background: This is it! Tom King’s run on Batman is done (sort of.)

Summary: Before we start, Tom King made the decision once again to split this final book up into so many random cuts that it’s impossible for me to write a coherent summary. What I’ll do is combine the parts together to form little chapters, which just like last will be shown as numbered points.

Chuck: “Nothing ends, nothing begins. It’s all the same. It all just keeps going.”

EXCEPT ITS NOT! There is an epilogue by next series writer James Tynion. The Joker’s goons ask him if he’d thought about Batman giving up his secret identity like Superman and if Joker knows who Batman is, why doesn’t he do something about it. Joker beats the crap out of him and then decides that maybe he is right…

Let’s get the epilogue out of the way first. It’s only a few pages, but the dialogue really feels like a breath of fresh air. I’m not going to be reading Tynion’s Batman past the first issue though. I am just too wiped out from reading an 85 issue storyline. I need some time away from Batman (at least they main title).

It’s over. All of Tom King’s crazy ideas have been boiled down to this ending. Let’s take this “chapter” by “chapter”.

Chapter one covers the fight between father and son. Except for a few punches, Selina is actually the one who fights Thomas the most. Thomas’s use of the gun just hammers home that he isn’t our Thomas, that losing his son and wife mentally imbalanced him to an extreme. The fact that Wesker can’t be controlled by the pirate is just too damn convenient. It’s another deus ex machina King pulls out of his toosh. Add to the fact that we get no update on any of the bat-family and this just makes things even more unsatisfying. We don’t need to of seen it, but the fact that we don’t even get a single line telling us what happened is weird.

Chapter 2 is nice and short. The fact that we never get an official word on why Claire (Gotham Girl) went bad is infuriating. She formed such a major cornerstone of the early parts of the storyline that her not having a satisfying conclusion is maddening. Oh, and platinum kryptonite? Really? At least she still has powers so she can show up later.

Chapter 3 is alright. The fact that Bruce and Selina decide that they practically are married, just not by law, is something that could have been decided by issue 75. Bruce did not need 25 issues of moping to get back together with Selina (and 8 of those in a dream).

Chapter 4. Oh chapter 4, what shall I do with thee? The fact that Bane breaks A Batman is nice and unless someone dares use him again, Thomas has been taken off the table permanently. Thank god, because I honestly don’t want to see him ever again. Also, how the !$@$%^ is bane still alive? He wasn’t wearing his mask when he got shot or any type of facial covering. He survived two bullets straight to the head? Alright then.

Chapter 5 is really supposed to be where the come down happens, but by that point I was just too damn tired. 5 issues ago I would have thought it was meaningful and cute writing, but the fact that I didn’t remember who Chuck Brown was doesn’t bode well for the book and story.

Tom King is over. For those of you who enjoyed all this, kudos. But King lost me a few issues ago and never got me back.

PS: Why was Skeets with Bane in issue 50?