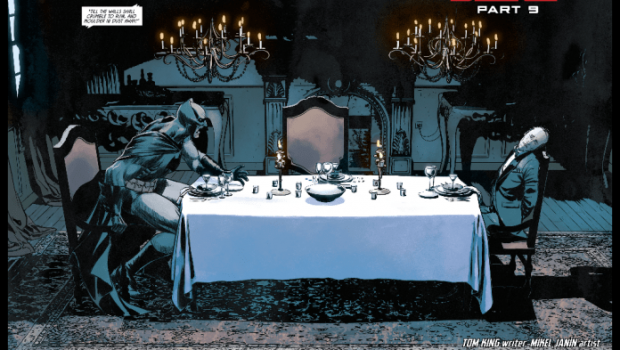 Summary: Tom King just does not get Alfred.

Background: 2 more issues and Tom King’s run on Batman is done (sort of.)

Summary: This will be short and sweet. Batman wakes up to find Alfred dead and tied to the same chair he died in. Bruce mourns Alfred as Alfred’s “last words” (I’ll get to those in a second) are played. Selina breaks the wall down that has kept Bruce trapped and brings him to Thomas. Thomas declares victory because he has Gotham, the Bat-family, and Selina all under the Pirate’s control. He finally asks Bruce if it is done. Of course he isn’t. Bruce doesn’t quit. The issue ends as the father and son line up for one more fight.

Final call: Suicide is not just. Suicide is not brave. Suicide is a cowards way out. Correct me if I’m wrong, but I’m pretty sure the book I just read tried to glorify suicide. Alfred’s “last words” describe Bruce standing on the roof of the building on the day of the wedding, where for a brief second Alfred finally saw the “real” Bruce break through. It is described as a joy. Alfred then used his signal knowing Bane would kill him so he decided to take himself off the board because he thought he would prove to be a distraction.

First of all, that is complete and utter bull. Alfred has been saved by Bruce soooooo many times. Why would it be now that he would take himself off the board? Really, this was no different than any other time Alfred got caught by someone. All Alfred ended up doing was getting the whole damn family captured. His suicide created more problems for Bruce. Also, to glorify a suicide like this is beyond the pale. It would be one thing if Bruce was … I don’t know, locked in a burning building and Alfred sacrificed his life to save Bruce. While that would still be tragic, there would be a reasoning behind it. The way this was done was just pointless.

Second of all, the time on the roof was the first time Alfred saw Bruce smile? Not the time he was with Julie? Not the time he was playing with Ace and Damien in the end of the first New 52 Batman & Robin Arc? Not the 50,000 other times Bruce has legitimately smiled? King appears to have completely misunderstood Alfred’s character. It wasn’t that he thought of himself as a distraction… it was that he knew he was Bruce’s rock and to off himself to “help” Batman was asinine. Tom King had me for 81 issues, but now I’m just ready for this to be over.