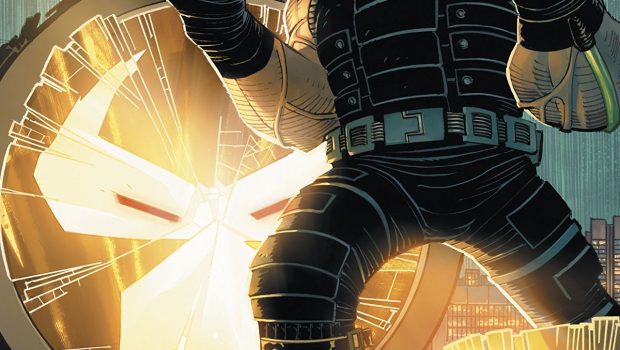 Summary: Bat god returns in a crazy way. Thomas gets beat and the family returns!

The Story: The Bat God is back, but it reappears in such a ridiculous way I actually laughed out loud in Whole Foods when I read it.

Background: 4 more issues and Tom kings run on Batman is done (sort of.)

Summary: Thomas can’t bring himself to shoot Damian. Damian then activates his “son of Batman mode” (not a real thing but something I named for when Damian acts badass and literally breaks free in a panel and a half. We then get a nice splash page of Batwoman, Damian, Tim Drake, Batgirl, Barbara, The Signal, Orphan, AND the Huntress all surrounding Thomas Wayne. For the only the second time since he showed up in this storyline, Thomas actually looks a bit worried and confused. Here’s where the crazy bat god stuff comes in. Way back many issues ago, when Bruce hit Damian, he didn’t REALLY hit Damian. Apparently, as part of their training, the team is meant to learn the strength of Bruce’s strikes and kicks. That particular hit sent Damian a message that was then relayed to the to the members of the team to lay though and he’d contact the. We then find out that Bruce KNEW that Gotham Girl was helping Bane and he purposefully lost to Bane so he could figure out how to beat the villains from the outside.

Now look, on one hand, that’s a brilliant move. Luring your enemies into a zone of comfort and then kicking their tails is a great plan. What I’m not a fan of is that WE were under the impression without even a hint that Bruce really was broken. As far as I could tell, there were zero hints about this plan and that Bruce was doing any of this on purpose. I can accept Bruce beating the Hyperclan. I can accept Bruce coming up with a way to beat Infernus and defeating the Court Of Owls. Hell, I’m even ok with the idea that of this all being one giant ass plan, but the execution of it is flawed. It makes it looks like King wrote himself into a corner and had to think of a quick way out. He also reveals that what Gotham Girl and her brother took that gave them their powers is super-venom and that’s why it’s killing them. That shipment they stopped Magpie from delivering? That was super-venom. OK then. The one thing Bruce didn’t count on was Magpie beating him to the mountains first. Selina became the variable and saved his lie.

Thomas Wayne beats the snot out of the entire Bat-Family and remarks that his son had trained children to be warriors. He finds that repulsive. That answers my question in the last review when I asked what he thought Bruce had done to Gotham Girl. Thomas is against sending children off to war. That makes sense, but Thomas has done virtually the same thing by using Gotham Girl. She’s not actually his partner. She’s just another weapon in his utility belt.

The Joker turns out to be Basil Karlo who is on the side of the angels (which also explains how he’d be OK following Bane’s rule.) How Bruce knew he was still alive is unknown, but he’s bat-god so yeah. Bruce still doesn’t know about Alfred’s death, so that’s going to be a road when we come to it.

The issue ends with Thomas Wayne declaring himself Batman. Oh and Harvey Bullock does a naked dance and song while smoking and staring up at a symbol of Doom in the sky.

Art: Again, the hate John Romita Jr. gets is very confusing. His work is just fine.

Final call: As much as I complained about Batgod in this issue, I freaking love it. It’s the Batman I grew up with and he’s back. God I can’t wait for Bruce to beat his father senseless.