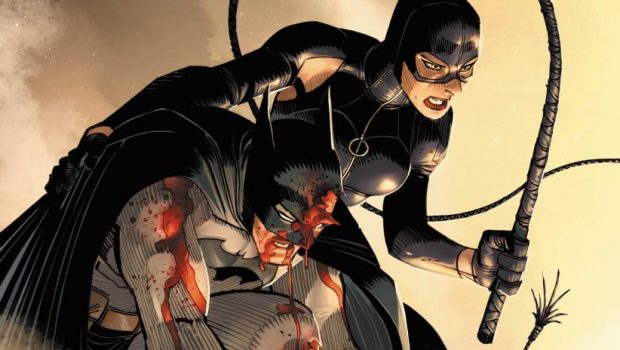 Summary: After a long dry spell, the Dark Knight is back and Gotham's about to get crazy (er).

The Story: Batman is back in Gotham city and for the first time in a long time, it feels like the Bat god is returning.

Background: 5 more issues and Tom kings run on Batman is done (sort of.)

Summary: Bruce has taken everything Bane and his sort of dad can through at him and by god he’s not staying down. Watching Two-Face realize exactly who he’s been trying to shoot is priceless as we see the familiar bat symbol with a few smoking bullet holes in the armor. The bat signal is lit as Hugo Strange cannot possibly fathom the idea that Bruce is back. In his words “What that man experienced… He was broken. I have no doubt.” Thomas on the other hand knows straight away that this can be only the work of Bruce. Mad Hatter attempts to kill a stray cat (per Gotham’s new laws strays are not allowed), but Catwoman saves the kitty who gives her shadow a small reassuring purr. Batman then encounters Kite-man who has the best exchange of anyone in the book.

Bruce is dare I say having fun as Batman again for the first time in a long time. We see Thomas interacting with Gotham Girl, telling her Bruce will pay for what he’s done to her. I have a question: what is he talking about? Bruce tried to save Gotham Girl soooo much. If anything, it’s Thomas and Bane’s fault for allowing her psychosis to progress.

Bruce and Hush have a Mexican standoff with Bruce winning (and cheating!) with a batarang to the chin.

We end the issue with Thomas prepping to meet and kill Damian and Bruce letting Selina know that if he was his father, he would have placed out safeguards in place to keep him out of the cave. Which means, it’s all in Thomas’s hands now.

Art: For years, I read and heard people complain about John Romita Jr.’s art. While his art on the Heroic Age of the Avengers wasn’t my favorite, I don’t particularly mind his style. He’s got great use of facials and While some of his work occasionally seems blocky, I think it’s perfect for the issue (no pun intended) at hand.

Final call: Bane is in a whole heap of trouble. What the villains just can’t seem to grasp is that Batman may be flesh and blood, he is not a man. He is a force, an idea, and he won’t stop. EVER!