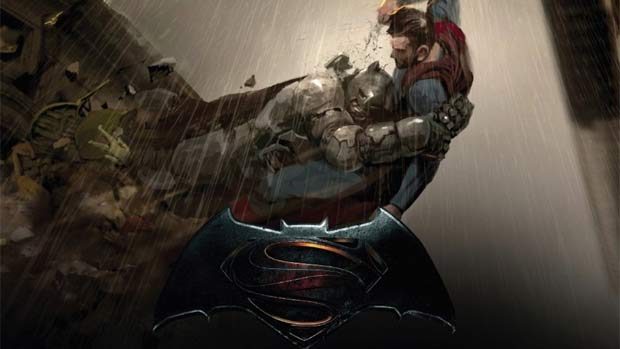 Summary: Batman v Superman Dawn of Justice The Art of the Film is a beautifully presented with book with some stunning images

Okay, I must admit that I wasn’t a fan of the film and given that I’m a fan of the comics, this interpretation of DC Comics’ trinity left me quite disappointment. However visually, including some of the ideology behind the characters was quite interesting and this 192-page hardcover book goes into the art behind the film of Batman v Superman: Dawn of Justice. The film was ‘meh’ but the book is ‘wow’. 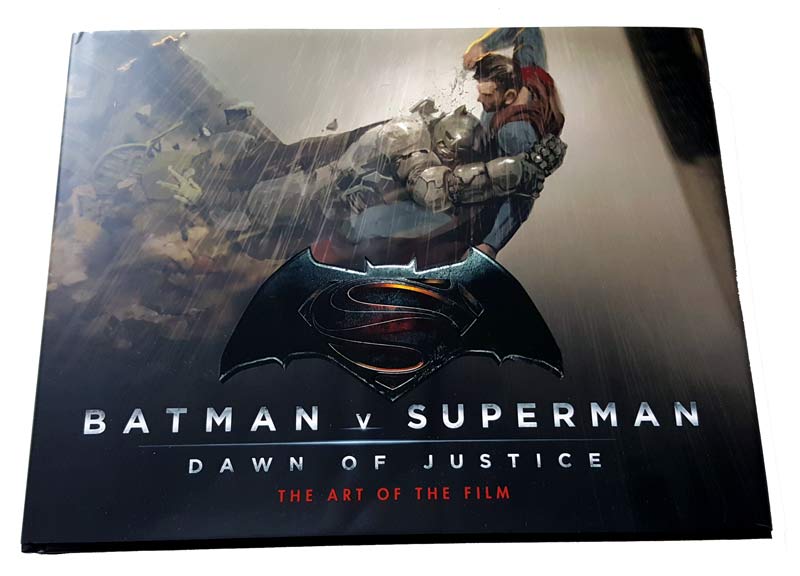 Batman v Superman: Dawn of Justice is also the second film of the new DC Universe movie franchise with the next film being Suicide Squad (2016), followed by Wonder Woman (2017) and then Justice League (2017). In Batman v Superman and after the devastating destruction seen in the film Man of Steel (2013), the world is divided on whether Superman can be trusted, however for Bruce Wayne (aka Batman), he believes he is a threat to humanity. 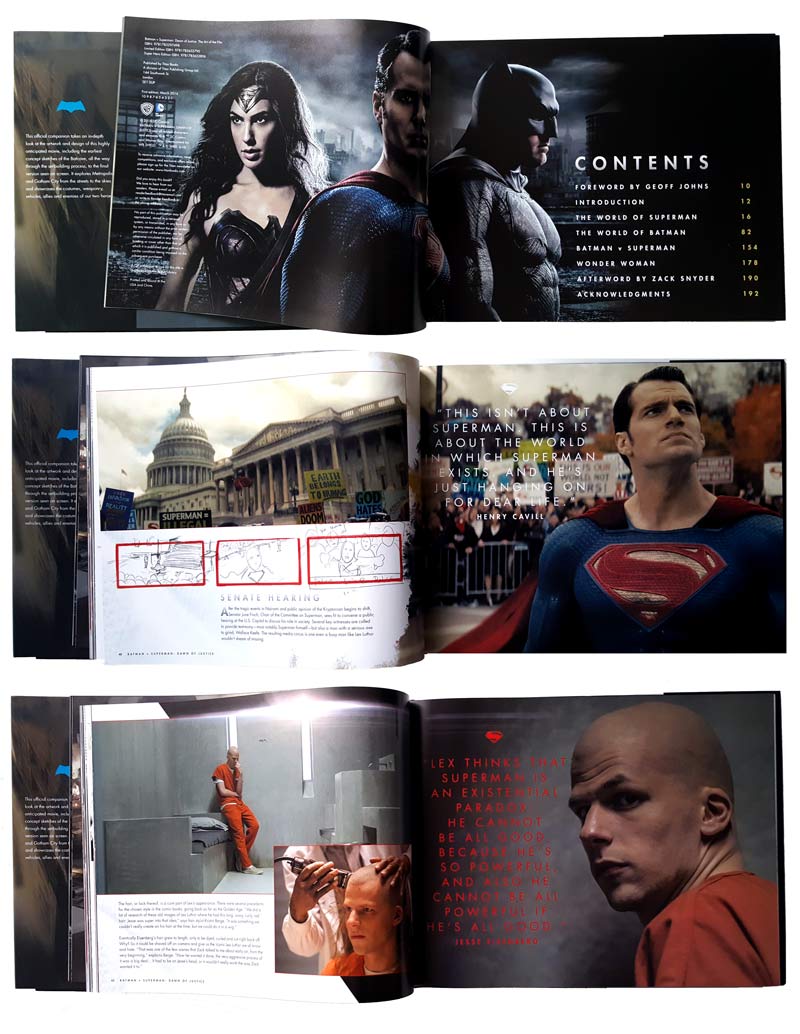 ‘Oh, I don’t think you’ve ever known a woman like me” – Diana Prince

So as Lex Luthor attempts to create a Kryptonian monster called ‘Doomsday’, he is also pulling the strings of both Batman and Superman in a hope that they will either wipe each other out. Lex is also portrayed as this young genius but something from another world is pulling his strings. Thankfully Wonder Woman is the unknown element and although we see one of superheroes most interesting battles, Batman vs Superman, it failed in the overall scheme but this book shines a different light on the movie. 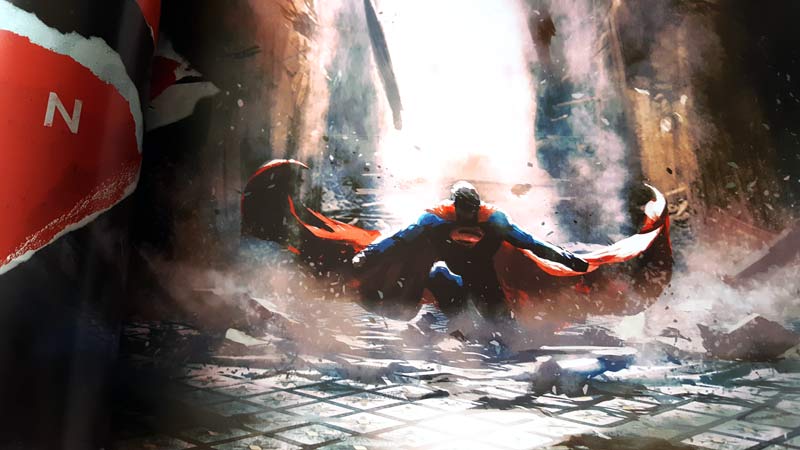 “You’re the best in the world at what you do Clark. So am I. Let me find the truth” – Lois Lane

When it comes to this hardcover book, it is brimming with photos, concept art and some amazing information from the film, including interviews with cast and crew plus a forward by legendary scribe Geoff Johns and an afterword by the director Zack Synder (Man of Steel, 300). Sure they don’t mention the lukewarm reaction to the film but it’s an interesting insight into turning an idea into a film. 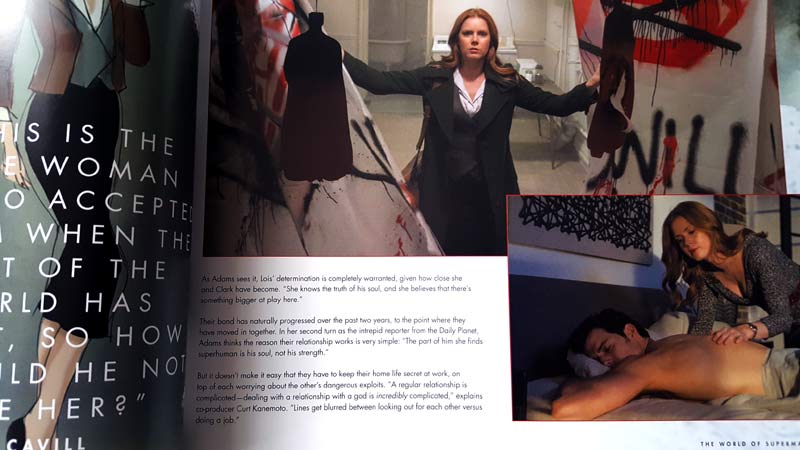 The book is also split into eight sections that include Foreword by Geoff Johns, Introduction, The World of Superman, The World of Batman, Batman v Superman, Wonder Woman, Afterword by Zack Synder and Acknowledgements. I also like how part of the book focuses on each hero, including their supporting cast and of course villains like the deadly Doomsday. So whether its exploring the motivation of Lois Lane or exploring the psyche of Lex Luthor, it’s quite an insightful looking into the characters in the film. 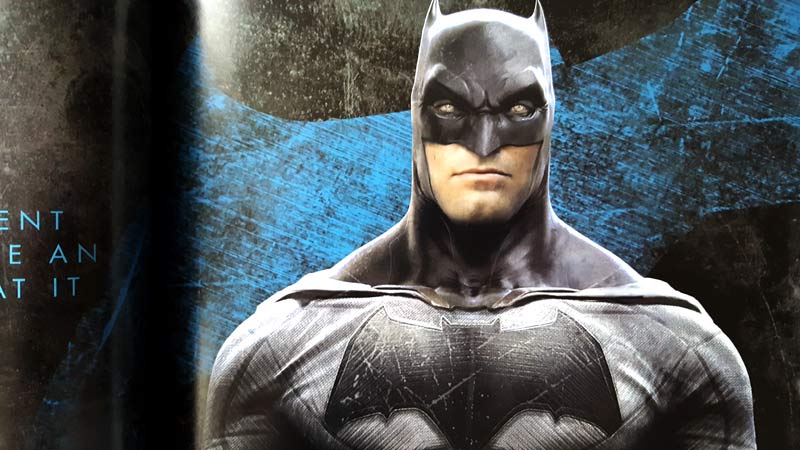 Add in concept art and photos from the film of Metropolis to the Batman’s cave plus his iconic Batmobile and it’s fascinating to see these images evolve into the final film. I also liked the early concept designs of Batman which looked quite strange. There’s also preliminary art of the clothing behind the characters such as Alfred, Batman’s butler or Lex plus the infamous remains of Robin’s costume that was seen in the Batcave. 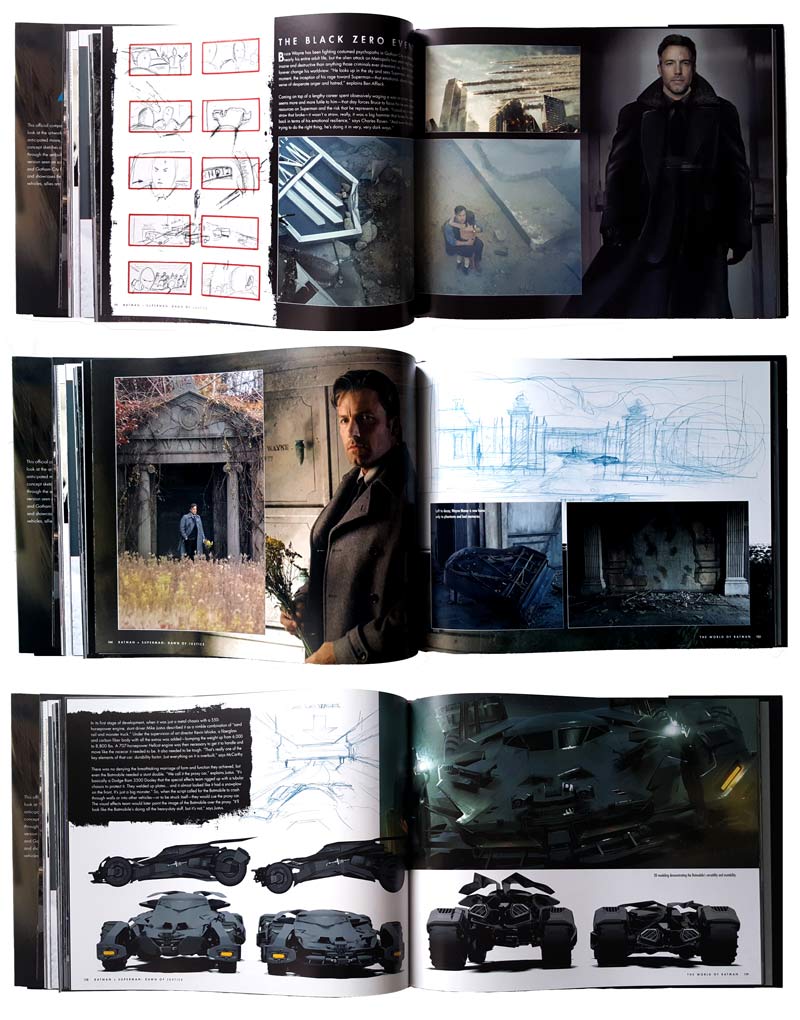 However the highlight of this book is its presentation with exceptional paper stock but more importantly, vibrant images that almost pop right out of the book. Publisher Titan once again deliver a spectacular release filled with amazing imagery from both the film, behind the scenes and the artwork used in its creation. 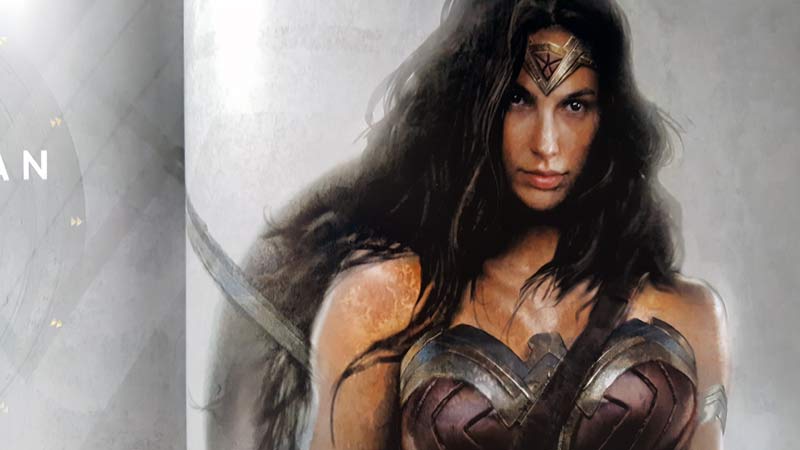 Even if you disliked the film, I found Batman v Superman Dawn of Justice The Art of the Film  a visual and informative experience. Sure, there is a disconnect between the film’s creation and the final version but this book gives the reader another twist which wants me to watch the Ultimate Edition of the film when it’s released in July. Lastly, author Adam Newell should be commended in putting together this comprehensive look at the art from the film. 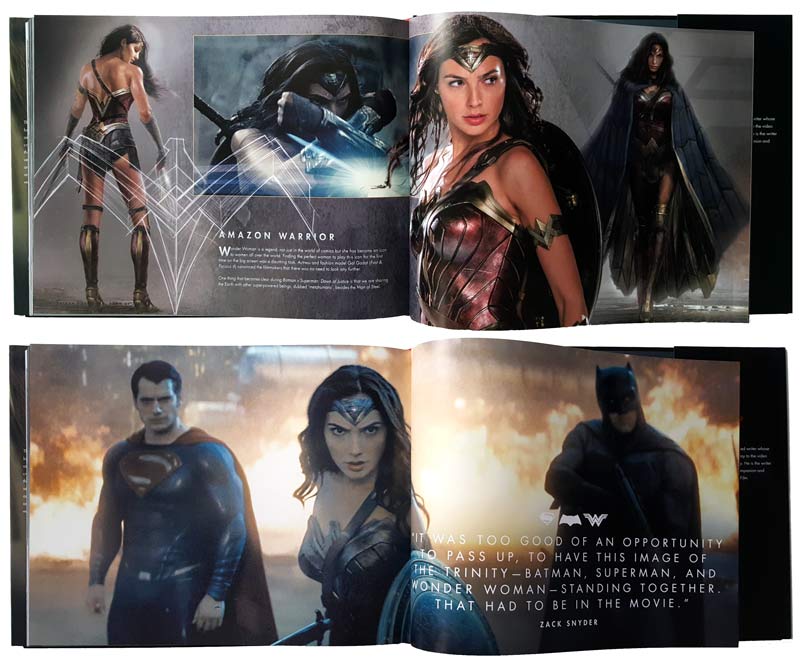 Official synopsis: Fearing the actions of a god-like Superhero left unchecked, Gotham City’s own formidable vigilante takes on Metropolis’s most revered, modern-day savior, while the world wrestles with what sort of hero it really needs. Zack Snyder’s Batman v Superman: Dawn of Justice sees Batman and Superman come together for the first time on screen.  With these two icons at war with one another, a new threat quickly arises, putting mankind in greater danger than it has ever known before.

Batman v Superman: Dawn of Justice: The Art of the Film, takes fans deep into this world, accompanied by insight and interviews with cast and crew, including an afterword by director Zack Snyder.

This official companion takes an in-depth look at the artwork and design of 2016’s most anticipated movie, including the earliest concept sketches of the Batcave, all the way through the set-building process, to the final version seen on screen. It explores Metropolis and Gotham City from the streets to the skies and showcases the costumes, weaponry, vehicles, allies and enemies of our two heroes.

Packed with stunning concept art, Zack Snyder’s storyboards, blueprints, costume detail and behind-the-scenes shots from the set, this book is an invaluable insight into the world of Batman v Superman: Dawn of Justice. 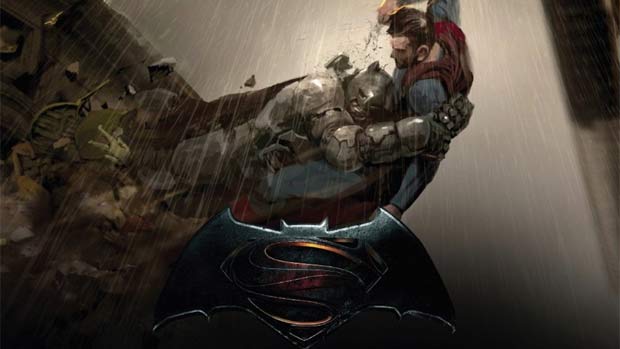 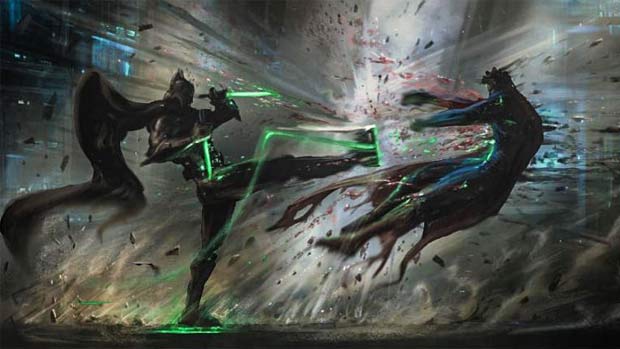 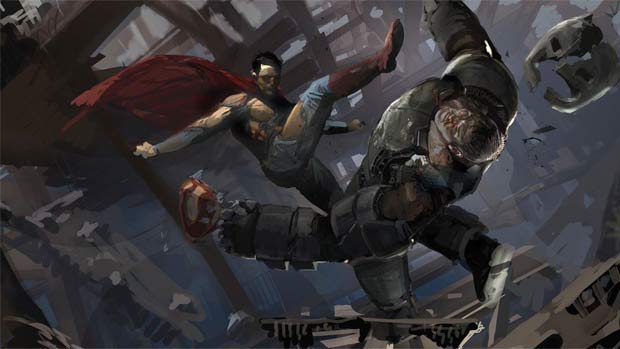 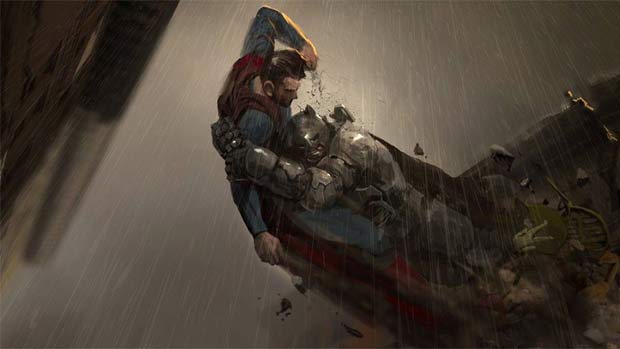 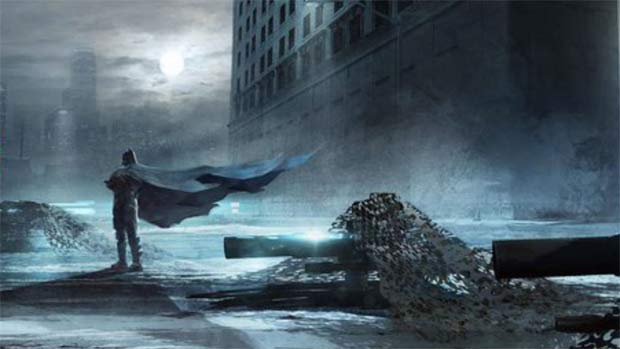 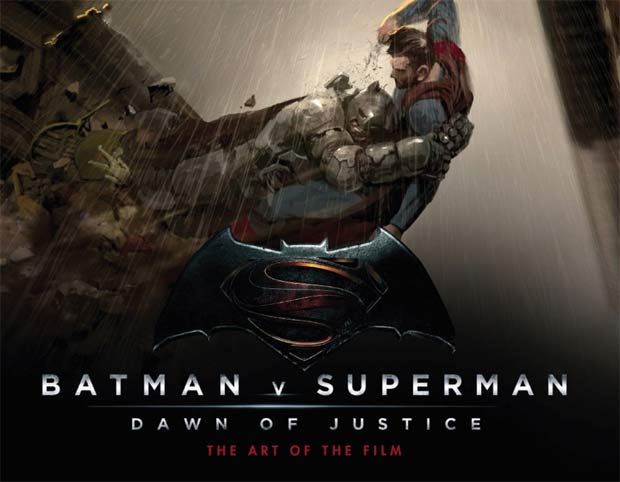