Summary: Basketball for the number crunchers

The extent of my basketball experience—outside of shooting hoops at the park with friends—came in 2012 while I was on student exchange at the University of Wyoming. It was basketball season and, looking to immerse myself in as much culture as possible, I went along to the first home game. Even though I had minimal understanding of the rules, it was hard not to embrace the atmosphere. The crowd never fell silent, split between cheering for their team, trash-talking the opposition, and calling for ‘the beer song’. The incessant squeaking of shoes was our audible reminder of the intensity of the players as they jostled and dribbled. Even with the barest understanding of the game, there was something innately captivating and visceral about the entire experience. I went to every home game just to feel that thrill and shared sense of excitement. 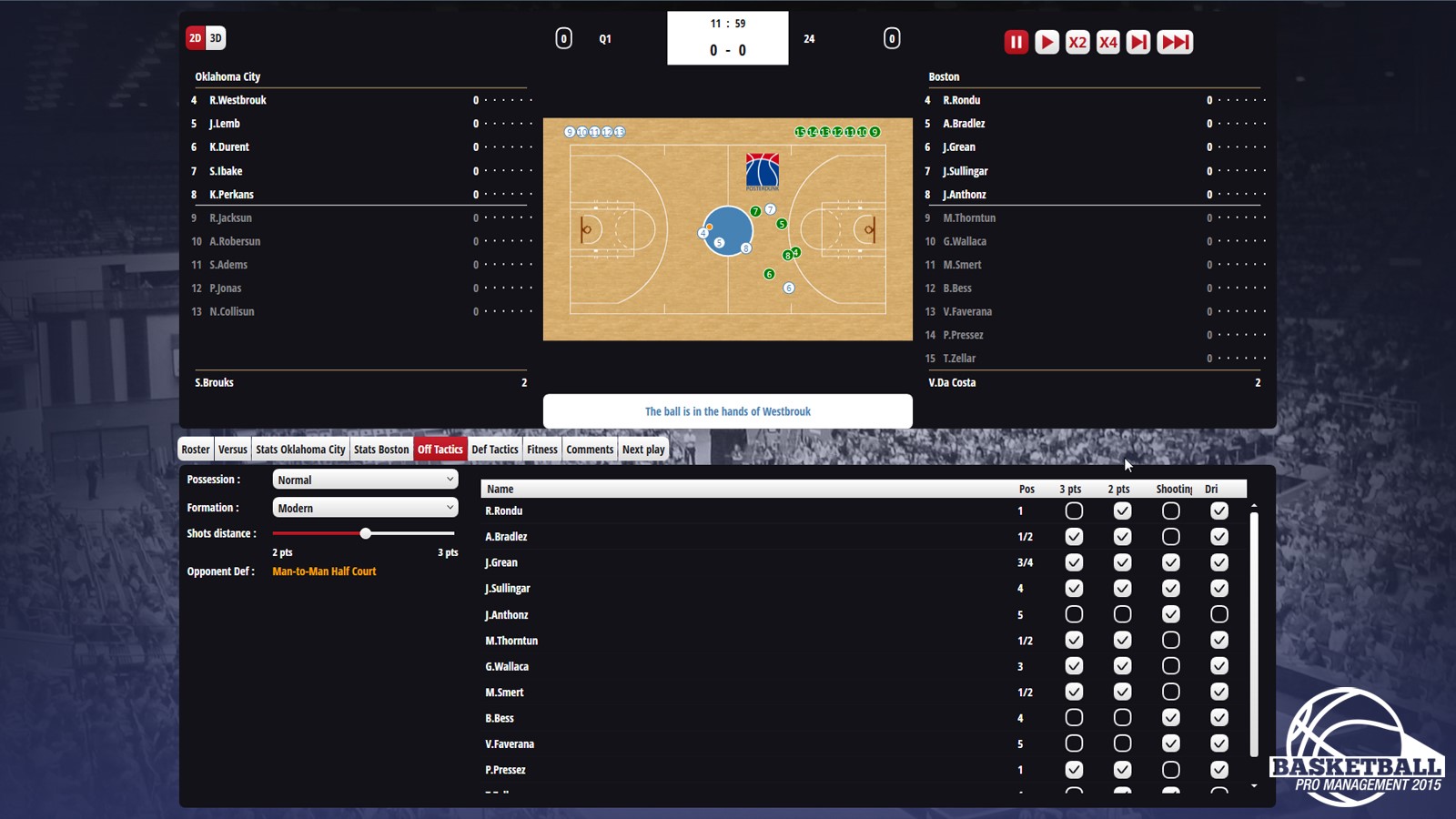 Basketball Pro Management 2015 lacks this raw energy. It feels less vibrant—less wild, even—and more methodical or technical. But that’s not a surprise; this isn’t the spectacle of the NBA Live or NBA 2K series. It’s a management sim and with that comes a more reserved approach.

In an unexpected twist, the ambient noise—crowds cheering and the squeaking of shoes—give BPM15 an authentic sound and capture some of the same atmosphere I experienced while watching both college-level and NBA basketball; however, some of the sound effects are simply too loud, which was quite overwhelming. I was forced to play the game muted, or turn the sound on my PC way down to compensate. 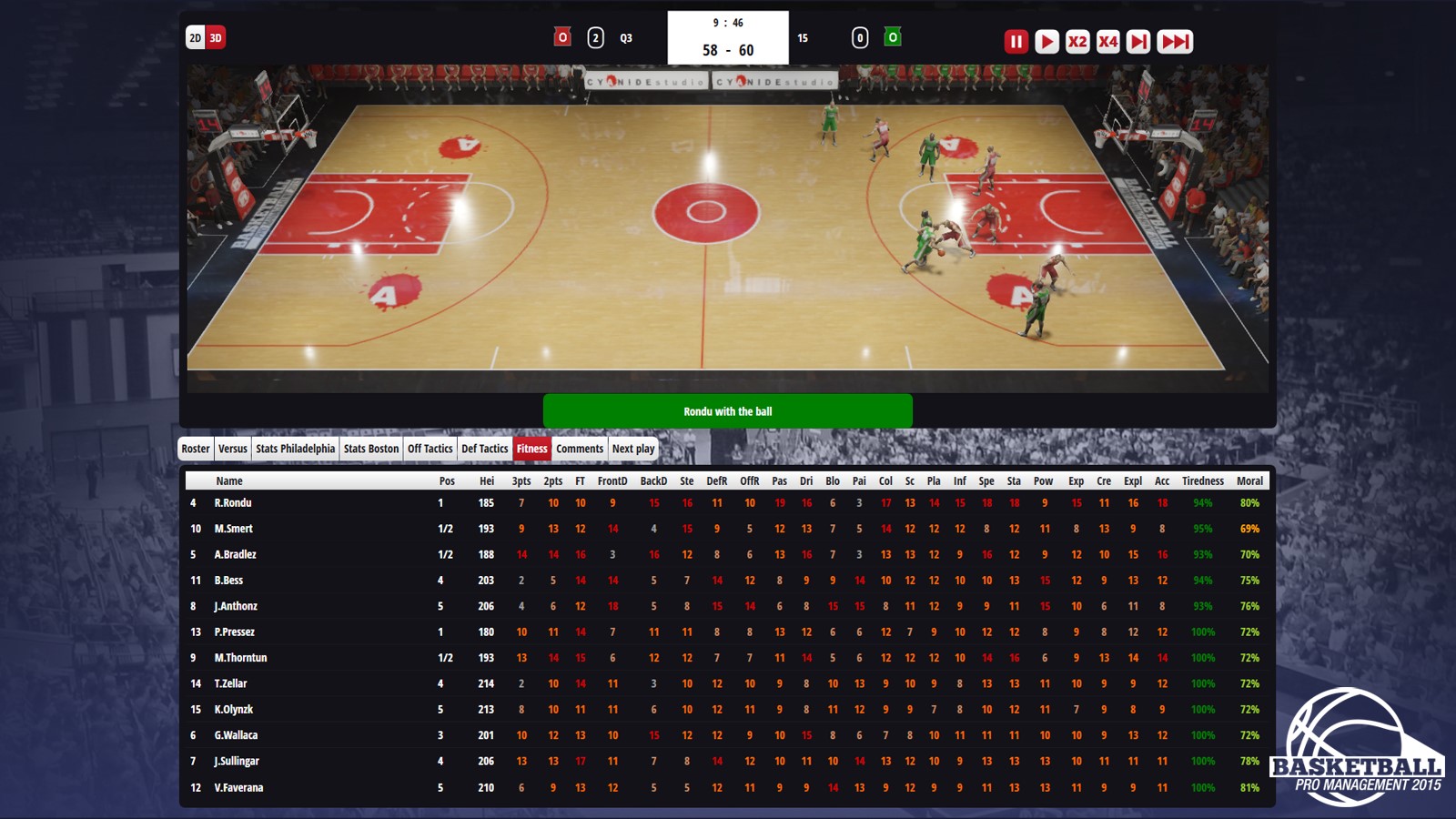 Where the difference between actual basketball and BPM15 becomes most apparent is watching the simulations. The simulated players—both in 3D mode and the dots-for-players 2D mode—lack the tenacity of a real basketball match. The intensity and gravitas of a match is diminished when the players are almost entirely static on the court. Movement often consists of a single defender awkwardly vibrating in front of his opponent, otherwise immobile, until the opponent passes and every player quickly relocates to the next stationary position. It feels unauthentic—basketball, as I know it, is a very fluid and seemingly chaotic game.

BPM15 is basketball not necessarily for fans, but for fans of fantasy basketball. It’s all complicated menus and complex statistics and putting the right players in the right positions at the right times. This isn’t necessarily the wrong approach, but it feels detached from the thrill that comes with supporting an actual team. Even the pressure of dealing with fan and director expectations is reduced to coloured approval bars and percentages. 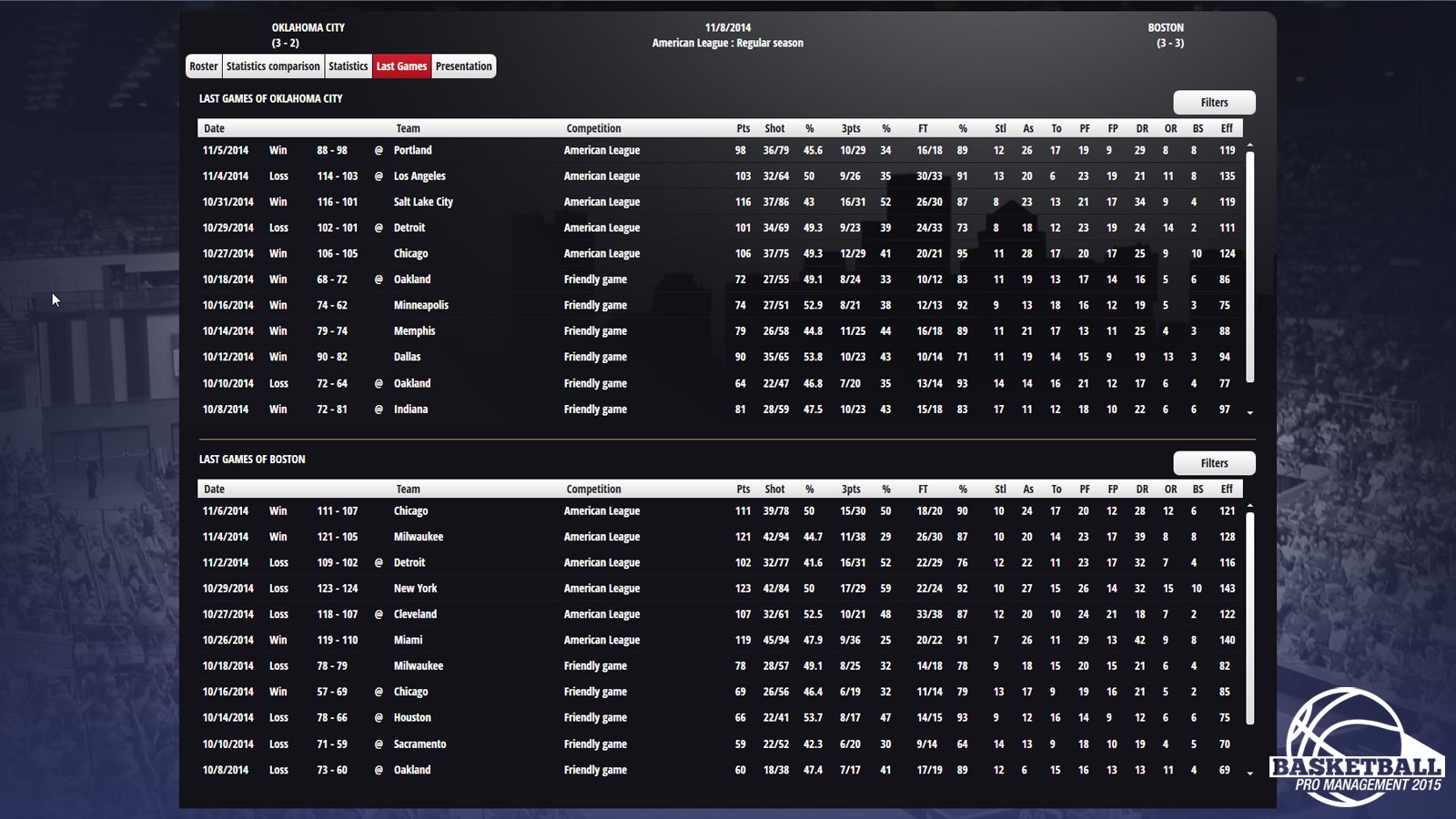 My minimal understanding of standard terms, concepts, and strategies in basketball contributed to my overwhelming sense of confusion. While the vast majority of these issues—like the time I accidentally let my five best players’ contracts expire—were absolutely my fault, BPM15 doesn’t assist this by having a clunky, unintuitive interface. At its worst, BPM15 is a series of three horizontal menus and a whole bunch dependent buttons—not to mention the permanent right sidebar with team details and the horizontal calendar bar at the very bottom, with the ‘advance one day’, ‘advance one week’, and ‘advance to next game’ buttons beside it. The screen is perpetually cluttered and mastering navigation is a terrible chore.

Paradoxically, it’s difficult for BPM15 to represent a lot of information on a single screen. There was no easy way for me to compare the stats of my players; I could compare two players, or see an imprecise star rating for each player on my team. For someone unfamiliar with what statistics are important for which positions—it was only after reading the terribly brief ‘tutorial’ that I even discovered there were designated positions and how to recognise them—the lack of simple comparison meant I did a lot of Google searching and trial-and-error to supplement my experience. 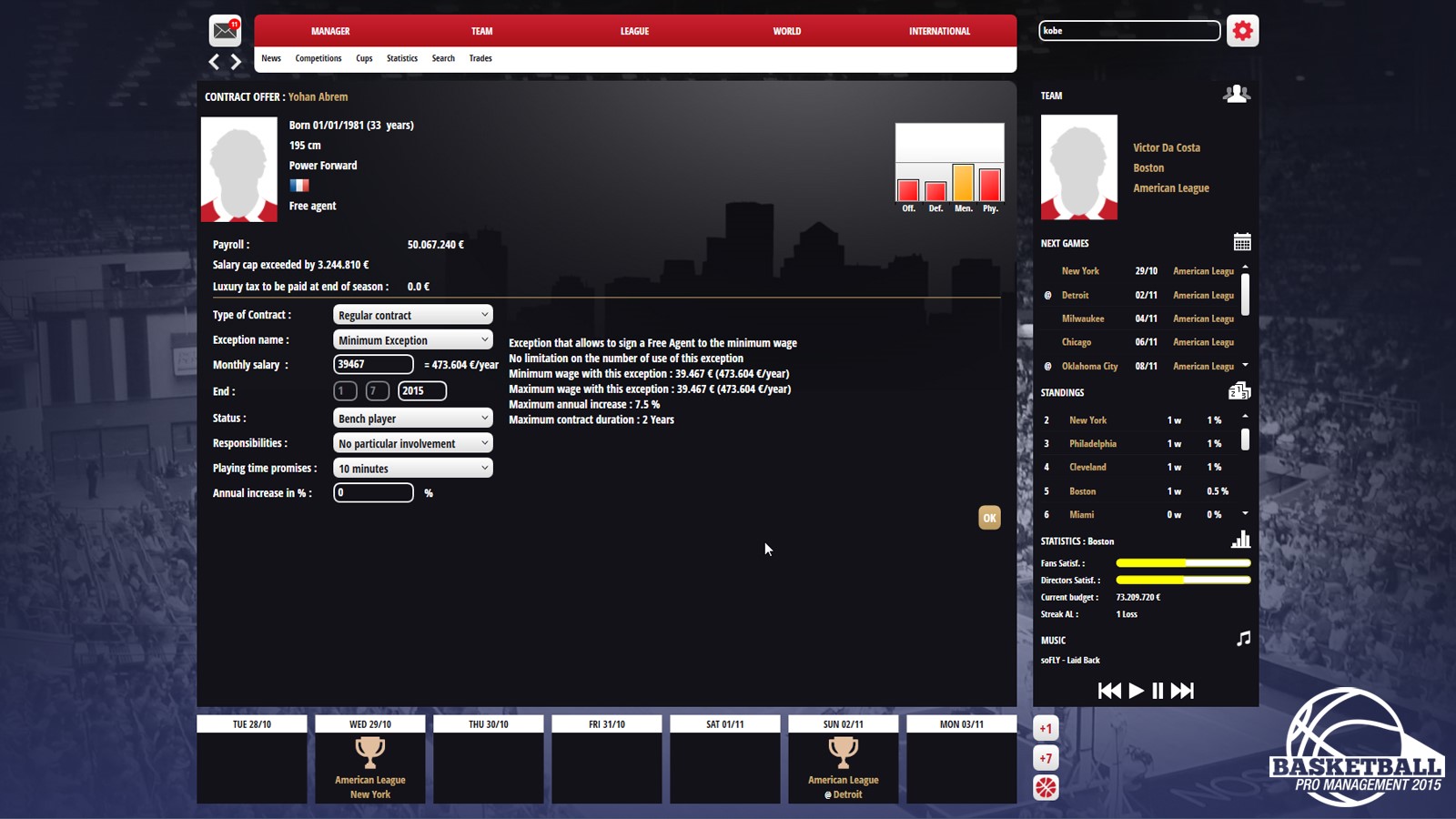 There are some weird but delightful inclusions. Not only are managers in charge of the usual team affairs—training, team selection, tactics—but they also seem in charge of dictating seating plan, ticket prices, how much to sell food and merchandise for, and whether to have cheerleaders or mascots (or both). It’s unrealistic, yes, but having such control over various expenses and sources of income will make the dedicated players very happy.

But this sort of forced responsibility is not always appreciated. I was glad to leave training and starting line-ups to my assistant until I learned more about BPM15 and basketball in general, but scouts did nothing except collect a paycheque if I didn’t tell them exactly who to watch. Some level of autonomy—by default, or as an option—would be lovely; I don’t want to pay people $30,000+ a year to sit around waiting for instructions. This was also hampered by the fact that to the ‘scouting menu’ I had to click ‘world’ and then ‘search’; contrasted with Football Manager 2015 which has a dedicated scouting menu, BPM15 seems a little unintuitive. 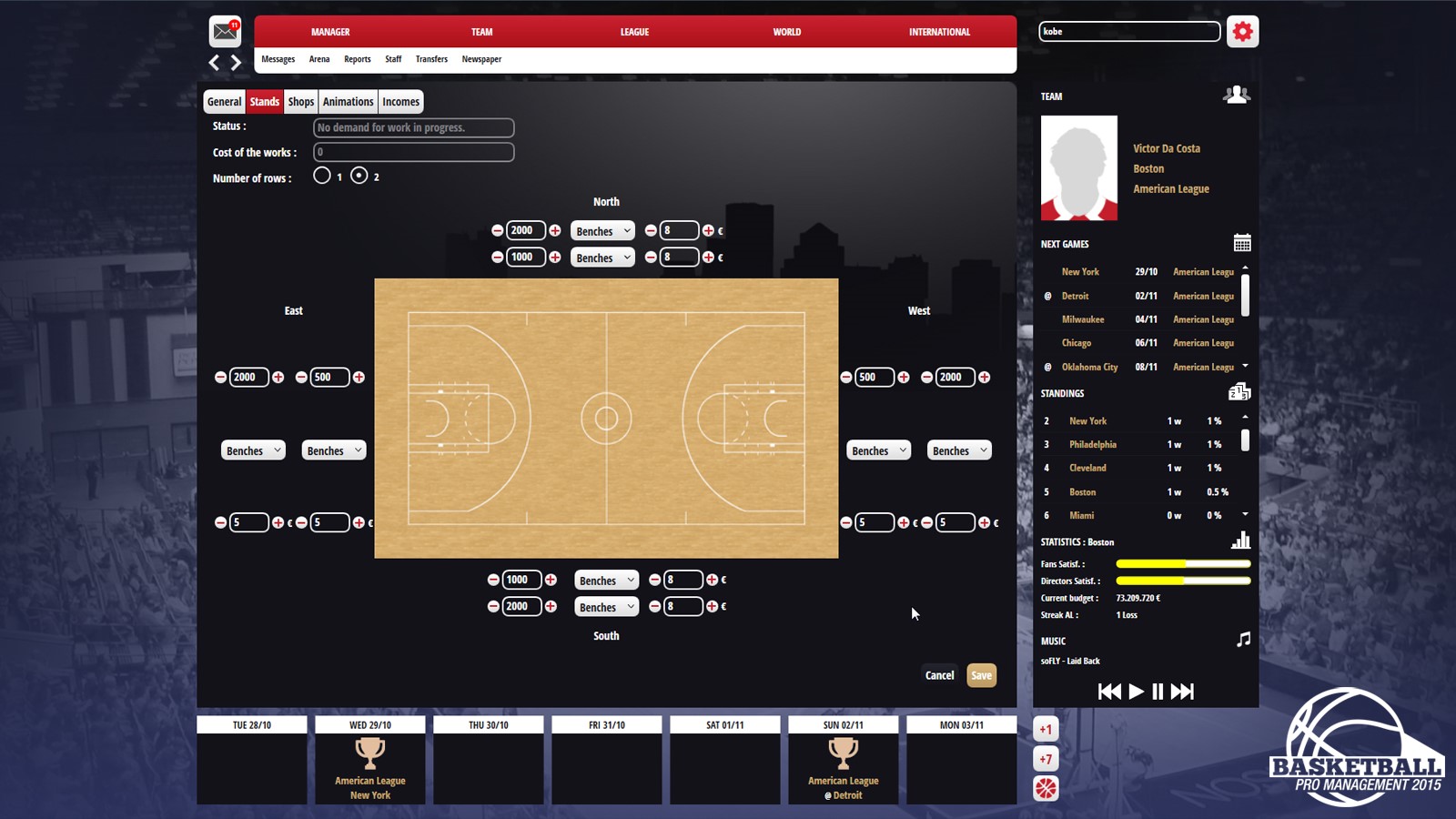 One of the strangest issues I encountered was that players and managers have placeholders for profile pictures, but no photos. Even LeBron James has the default picture. Using images to break up the interface is sound design in theory, but it mostly serves to highlight the actual absence of profile pictures. It’s these little niggling details that make BPM15 feel incomplete or unpolished.

Though it has its faults, one area in which BPM15 undoubtedly succeeds over other sports simulators is in its diversity—there are 43 playable leagues, including 6 women’s leagues. I can’t think of any sports games that offer female leagues. It may not overturn the male-leagues-as-default issue, but recognising that female leagues exist is a positive step and something that should be applauded. 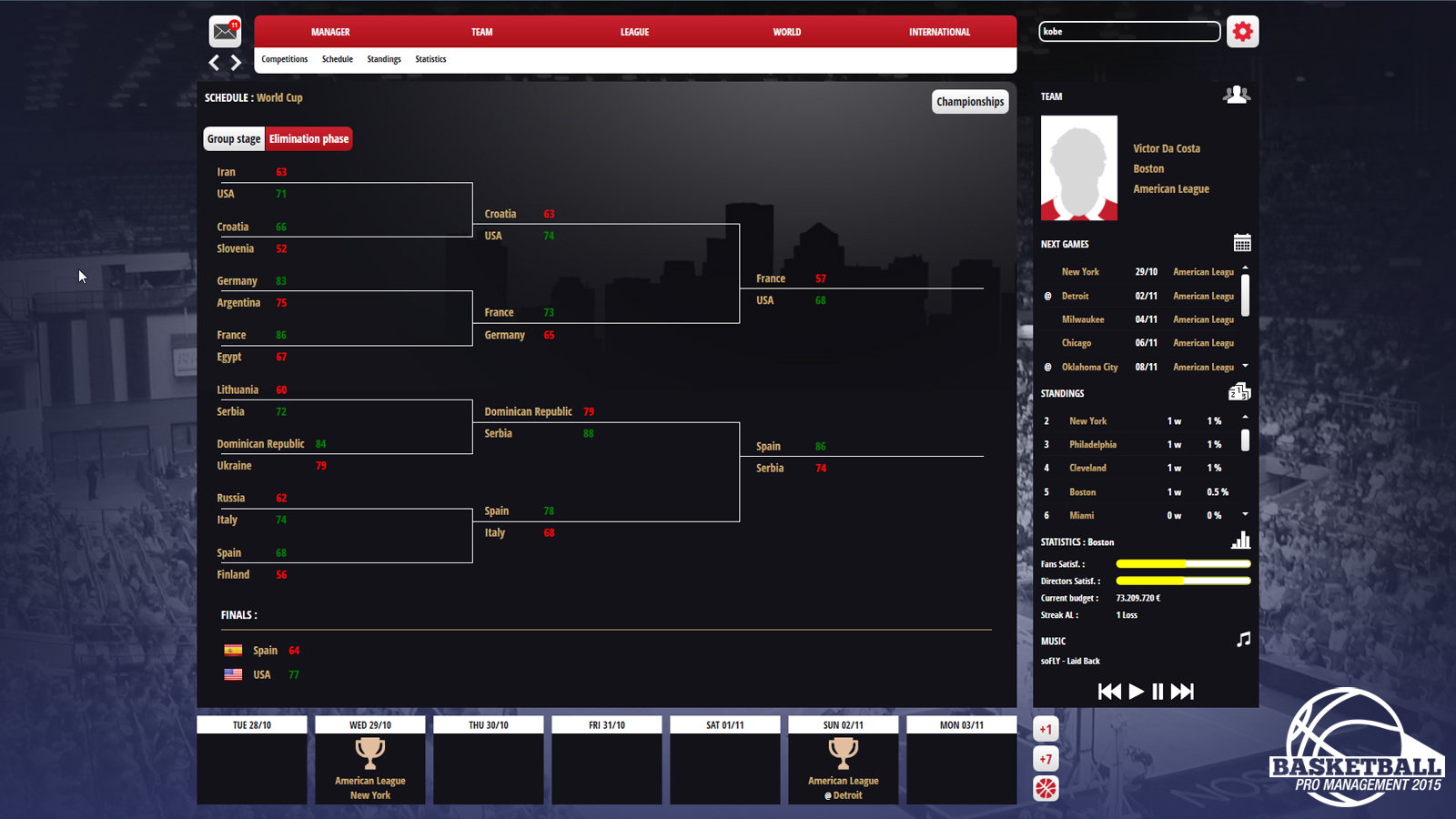 BPM15 is difficult to get into. The lacklustre user interface makes navigation difficult, and the immense number of responsibilities lumped on the player (manager) will probably turn off all but the most dedicated basketball aficionados. But if you can power through these issues, then BPM15 is actually a decent basketball simulator.