A groundbreaking new historical sci-fi series in Jeff Lemire and Dean Ormston’s world of the Eisner Award–winning Black Hammer universe, about identity, survival, and the choices we make. Coming off of his work in The World of Black Hammer Encyclopedia, upcoming writer Tate Brombal, with Eisner-winning artist Gabriel Hernández Walta (Vision, Sentient), pens an origin story set during the heights of the HIV-AIDS crisis in Barbalien: Red Planet. 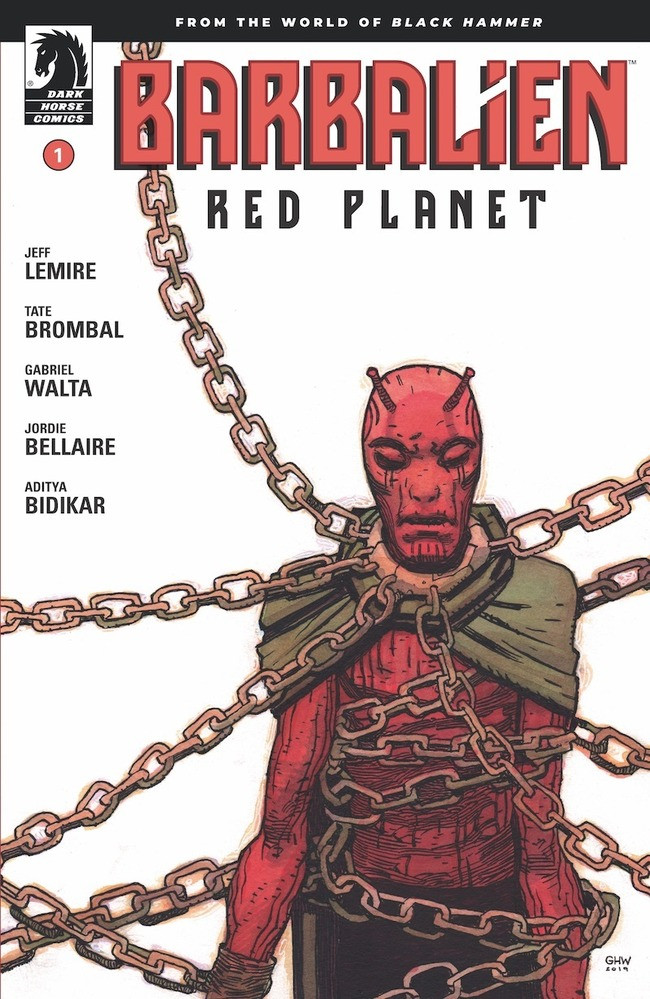 Mark Markz has found a comfortable life on Earth as both a decorated police officer and as the beloved superhero, Barbalien. But when Mark is suddenly thrust onto the frontlines of the AIDS crisis, his role as a cop raises doubts and he must now reckon with his own closeted sexuality. Growing tensions make balancing his disparate identities seem impossible—especially when a Martian enemy from his past hunts him down on Earth to take him home, dead or alive. Heroism, privilege, and complacency are all called into question, as Mark becomes more-and-more embroiled in the activism of the time and with the man leading its charge—the handsome and headstrong Miguel

Barbalien: Red Planet #1 (of five) will debut just in time for LGBTQ Pride Month and will hit shelves June 24, 2020, and is available for pre-order at your local comic shop. Be sure to pick up the crossover event of 2019 in the hardcover collection of Black Hammer/Justice League: Hammer of Justice, available everywhere books are sold April 7, 2020! You can pre-order Black Hammer/Justice League: Hammer of Justice now.

“Cross-company titles are always a novelty, but I am hard pressed to think of one as true to itself and its sources than Black Hammer/Justice League: Hammer of Justice. Leaning into the cinematic weirdness of Black Hammer, which is itself a sort of a love letter to the various subgenres of comics, as well as the mythic stakes of the Justice League, Jeff Lemire and Michael Walsh somehow pay loving tribute to both.”
–Newsarama

“You can’t peel your eyes away from it. It’s fast paced and fun with a lot of surprises.”
–Forces Of Geek

“Lemire has a reputation for exceeding recommended absolute ceilings, to reach higher and brush stardust. This is a worthy ascent, one with his largest payload to date.”
–DoomRocket

“It’s the most fun I’ve had reading Justice League in quite some time.”
–Sequential Planet