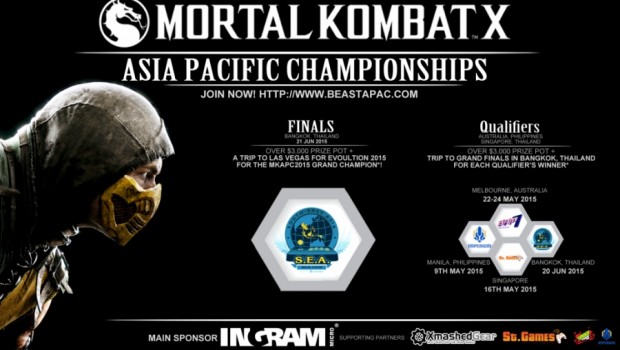 At the upcoming Battle Arena Melbourne 7 (BAM7) on 22 – 24 May 2015, the top placing Australian or New Zealand Mortal Kombat X contestant will receive a flight to Bangkok, Thailand, and qualify directly into the Top 4 of the Mortal Kombat Asia Pacific Championships (MKAC), held at the South East Asia Major.  The winner of the SEAM event will be flown to Las Vegas to compete in Mortal Kombat X at EVO World Championships.

Four qualifier events will be held in Singapore, Philippines, Australia and Thailand, to determine the final four Kombatants who will battle it out at the South East Asia Major in Bangkok, Thailand, to decide who will be Asia Pacific’s Mortal Kombat X Champion for 2015.

Kombatants will stand to win a total of USD $10,000 worth of cash and prizes, including the first prize of a fully paid trip to attend Evolution 2015 in Las Vegas, USA.

This prestigious prize is on top of the cash and prizes on offer at BAM7 for Mortal Kombat X. There is a $1,000 pot bonus to add to the cash prize generated by tournament entries, to be shared down the top 8 finishers.  MKX product prizes and merchandise including t-shirts for MKX entrants from WB Games, all taking place in a themed MORTAL KOMBAT PIT play area.

Carl White, aka Perfect Legend, champion Mortal Kombat player who won the EVO World Championships in 2011 and 2012 back to back, is appearing at Battle Arena Melbourne 7 to compete, meet Australian players, and challenge all comers.