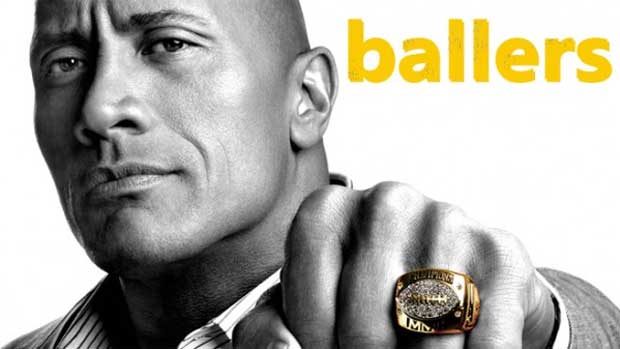 Ballers is a fun-loving, male-centric American comedy television series which, upon first glance, inevitably strikes comparisons to HBO’s Entourage series. Both are from the same network, both feature excessive testosterone and scantily-clad women, and both involve outlandish dialogue and displays of wealth. What sets Ballers apart is the charisma and genial nature of its lead actor and the show’s entertaining take on life after football – even if there is a bit of wasted potential in not exploring the recent topical issues in the NFL it depicts on-screen – and there’s still plenty of promise and room for improvement. 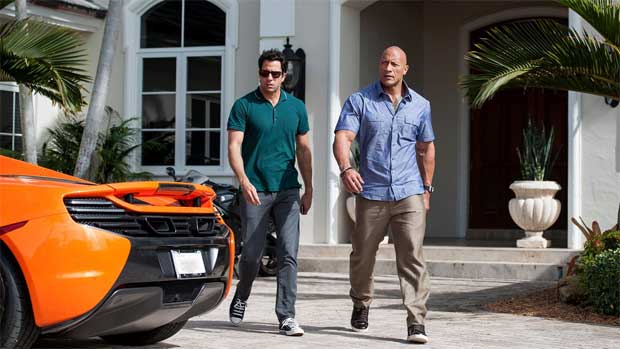 Series protagonist Spencer Strasmore (Dwayne “The Rock” Johnson) is a retired Miami Dolphins linebacker still clinging to his favourite sport and the wider football industry as a money manager. A teammate who saved Spencer from a career-ending fumble passes away, and his death inspires him to push harder in his new job at Anderson Financial. His socially stunted boss, Joe Krutel (Rob Corddry) makes it clear he only got Spencer his job as a financial advisor for his industry connections and his superstar friends still in the NFL, and puts pressure on Strasmore to sign more players – fast.

Strasmore is an extremely optimistic and friendly fellow and initially is hesitant to monetise his friends and industry connections – his likeable nature is a direct product of Johnson’s ability to capture the viewer’s attention in every scene he is in, and he does a great job as Spencer. The show really kicks off when Spencer realises the outrageous spending habits of NFL players such as Vernon (Donovan W. Carter) and the self-destructive nature of Ricky Jarret (John David Washington) needs real professionals like him to handle their money and their social lives, rather than irresponsible childhood friends from rough neighbourhoods or yes men. 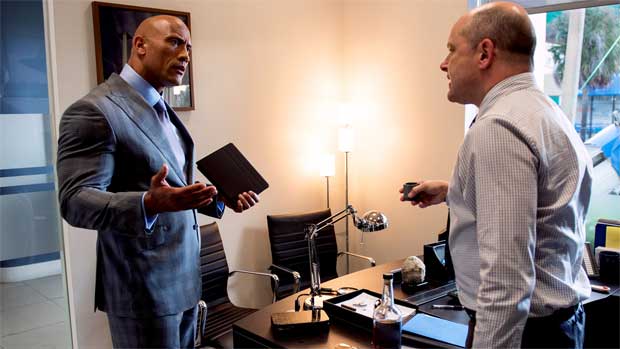 Both Johnson and Corddry have appeared on-screen before in Pain and Gain and are great here, with both of their characters bouncing off each-other as complete opposites – cool nice guy and hilarious egomaniac. Joe frequently loses his mind as a terrible person who doesn’t realise just how pathetic he is, while Spencer gets things done as smoothly as possible while surrounded by idiotic players and selfish suits. In between both of them is Charles Greene (Omar Benson Miller), another retried Miami Dolphins player dealing with the monotony of life after football. He’s a lot more mature and less irritating than many of his peers, and his story arc of returning to the game is a nice juxtaposition against the boobs and parties we see for the majority of the show.

Ballers makes for great binge watching: fast cars, plenty of beautiful women and hilarious dialogue  – not to mention real life NFL cameos – and it’s understandable why it’s compared to Entourage. The way Spencer hides his financial malaise (he literally has $200 to his name) underneath his infectious charisma and salesman-like smooth-talking is genuinely entertaining to watch, even if he’s being an absolute asshole and exploiting friendships for financial gain – even if said friends do need a helping hand in the money department.

If I had to pinpoint where Ballers fails to capture audiences, it would have to be a similar problem to its close bro-show: The inability of the writers to explore any of the issues it depicts in any meaningful way, or provide a satisfying conclusion to the drama and problems it uses for its character arcs continues here. Spencer pops pills like tic tacs to deal with a long-standing injury, Greene is begging for one more chance to play, and Ricky is an annoying hothead who never seems to get his just dues. They all end up succeeding in one way or another, or the interesting issues the show seems to begin exploring in-depth just isn’t given as much time as it deserves.

The Season 1 Blu-ray release is split into a 2-disc set, with all 10 episodes totalling 358 minutes. Bonus features are disappointingly limited to one short segment, Inside the Episodes. The commentary included is genuinely interesting, especially for those seeking additional insight into each episode and character directly from the cast members and producers themselves. The soundtrack throughout the show is also a highlight if you’re a rap/hip-hop fan. 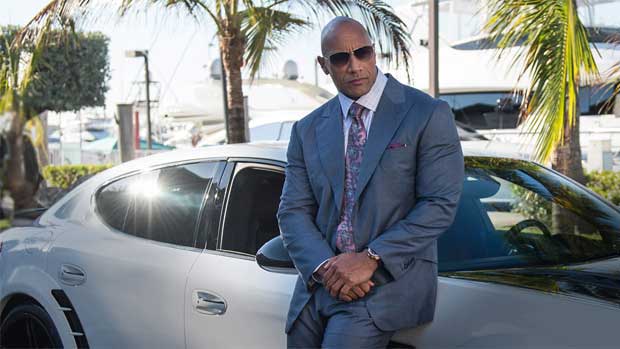 Dwayne “The Rock” Johnson is the solid foundation of this new HBO television show and makes Season 1 of Ballers worth a watch for casual and hardcore football fans, fans of Entourage or anyone who needs more binge-worthy escapism capsulated so hilariously on television. A lack of bonus features is disappointing, but Season 1 is still a solid play – hopefully the upcoming second season get rid of the small fumbles seen here in a more confident sophomore outing.