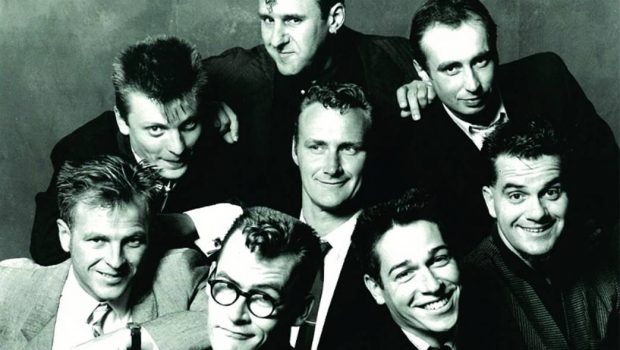 It is 25 years since Bachelors From Prague have performed together. The eight-man group formed in 1984 and fast became recognised as the flagship of a movement supporting new jazz in Australia. More than simply a musical foray, the Bachelors rise was an exercise in style.

Having developed in the early years from a select bohemian interest into a passion for the youthful night club fraternity, Bachelors from Prague was super cool and in great demand. A mode of jazz that didn’t sit well with traditionalists, their sound captured the spirit of seminal 1950’s be-bop placed in an energetic modern framework. Influences were not limited to modern jazz, and a healthy amount of funk, pop/rock and cabaret surfaced from time to time. The great majority of songs were original compositions with some standards being re worked to give a Bachelors flavour.

Bachelors From Prague achieved prominence with constant national touring and performances in London, Italy and at The Edinburgh Festival in 1990. They recorded 4 albums, made numerous video clips and performed countless radio and television appearances including The Big Gig and Hey Hey Its Saturday!, cemented their place in the Australian musical landscape before folding in 1991. They remained forever in the hearts and minds of a devout following, with many of the bands members going on to achieve success in other groups including King Kat Blues Cabaret, The Black Sorrows, The Feeling Groovies, Paul Kelly, Vika & Linda Bull, Renee Geyer, Archie Roach and The Triffids.

To celebrate the re-opening of The Night Cat in Fitzroy – set up by Bachelors From Prague front man Henry Maas in 1994 and recently re-launched by Bachelors percussionist Justin Stanford – the original line up will gather in its entirety for two nights only. With their Friday 2 September show now sold out they’ve added a second and final show on Saturday 3 September by popular demand. Melbourne’s finest purveyors of Cool, Bachelors From Prague will present their signature high energy show with style and musical muscle. Fans everywhere have waited a long 25 years for this moment. The time is now!

For the first time, the original recordings and original video footage and film clips are now available online: Buy Bachelors From Prague recordings

Bachelors from Prague are

Front man Henry Maas, Andrew Philipp and George Friml perform with The King Kat Blues Cabaret and Henry holds regular exhibitions of his paintings and sculptures. Jeff Raglus is also highly regarded for his visual arts and has remained highly active forming bands such as The Feeling Groovies which featured guitarist Tom Roberts and keyboardist Bruce Haymes, and The Beachniks. More recently he has toured nationally and internationally with his wife Vicki Philipp with their act Victoriana Gaye. George Friml, The Bachelors bassist and the member of the band that actually comes from Prague, has exhibited his sculpture works regularly around Melbourne and held a highly successful and confronting show in Phnom Penh in Cambodia.

He has been in countless bands around Melbourne over the past 25 years. Bruce Haymes has been a much sought after keyboardists and for the past 9 years played with Paul Kelly, Renee Geyer, Vika and Linda Bull, Archie Roach, The Triffids and many more acts. As a session musician he has played on over 150 albums for artists such as James Reyne, Mark Seymour, Leo Sayer and many, many more. He is also an ARIA Award Winner for composing the music for the film Lanatana. Tom Roberts and Russell Cook find themselves on the south coast of NSW where they have both continued to play in local bands and more recently playing together in The Funks of Fusion. Russell also works as a visual artist and exhibits regularly in NSW and in Melbourne.

Birth of the Fool