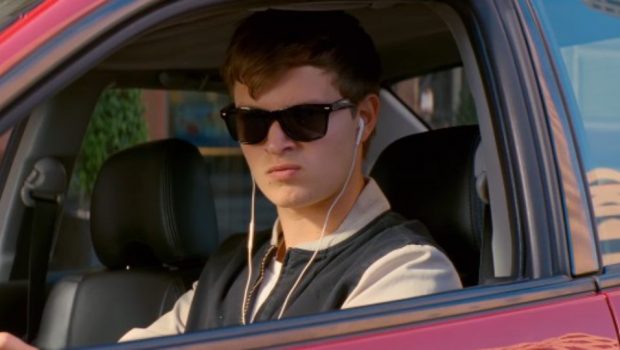 Director Edgar Wright started his career with the English television show Spaced (1999–2001), which starred Simon Pegg, Jessica Hynes and Nick Frost. The show was a hilarious take on shared living during your twenties. Packed with pop culture references from Star Wars to The Shining, it was a tongue-in-cheek, smartly edited programme that gave way to Wright’s directing career. Through his well-received Cornetto Trilogy (2004–2013) and the American feature Scott Pilgrim vs. the World (2010), Wright has shown considerable talent for writing smart dialogue and filming sharply edited action containing a comedic edge. Baby Driver is a culmination of these skills and is delivered at times with a breakneck pace and a slick beat to match.

After a fatal car crash kills both his parents and leaves him nothing but a cassette tape full of music and with a severe case of tinnitus, Baby (The Fault In Our Stars’ Ansel Elgort) drowns out the painful ringing in his ears through music of his own. Never without his iPod and headphones and through musical genres spanning soul, jazz, reggae, rock and R&B, Baby is perpetually off in his own rhythmic world. After falling in with the criminal underworld as a young man, his skills as a beat fuelled getaway driver become pivotal to the success of organised, high steak heists. Rubbing shoulders with criminals and outsmarting the law has its cost and Baby begins to learn that this kind of life isn’t all song and dance.

Opening with a rollicking Jon Spencer Blues Explosion soundtrack during a daylight heist escape, the film immediately lets you know of its stylistic intentions. Leading directly into a single take opening credits scene (something Wright seems to be fond of now), the audience could be forgiven for thinking they’re watching a musical on four wheels with a greased-up gear shift. Settling in (but only slightly), we are introduced into Baby’s world. He lives with his adopted parent Joseph (T.V. writer/producer C.J Jones), and frequents Bo’s Diner to admire his waitress crush, Debora (Lily James, Downton Abbey). Debora and Baby chat over coffee and do a terrible job at hiding their not-so-secret love for each other. Baby discusses music with Debora but mentions nothing of his passion for driving.

Meanwhile, Baby’s criminal crew are a rough-and-tumble mix of gung-ho attitude and loose wires. They are led by Doc (Kevin Spacey) and rounded out by guns-for-hire Buddy (Jon Hamm), Darling (Eliza González), Bats (Jamie Foxx) and Buddy (Jon Bernthal). While the crew works efficiently together, conflict arises between Baby and Buddy; the latter doesn’t trust the driver’s hands-off attitude to violence. Baby stays in his musical world and on the outer edge of the group during heist setups; he uses his driving skills to avoid the loss of life during their rubber burning escapes. This puts the success of the heist and the crew’s safety at risk. After a deal goes violently wrong, Baby’s dedication and intentions are put under fire as his crew turns on him and changes the tune of his slowly shrinking universe. 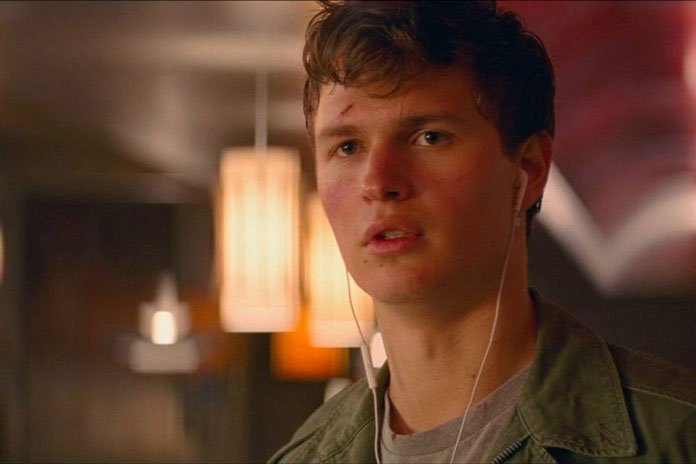 While some fans of the director’s work may miss the unmistakable English flair that has been present in the majority of Edgar Wright’s previous works, it doesn’t take long to get comfortable in the backseat of this well steered American vehicle. The actors relish the dialogue during their tense scenes, particularly Jamie Foxx and Jon Hamm (IMDB reports that Foxx waited on the set to watch Spacey act even when he wasn’t required). It’s been a while since we’ve seen Jon Hamm with a role this meaty and in the final act he helps bring physical force and emotional conflict between the characters when necessary. Foxx takes his time with the dialogue and his performance remains a welcome mix of cold, criminal professionalism and encroaching menace. Ansel Elgort doesn’t leap from the screen with his performance, but his baby face and schoolboy style suit the role and add gravitas to the character’s innocent ideals.

The scenes he shares with Lily James are a relief from the violence, and as the film progresses they create a predictable, yet enjoyable romantic focus to Baby’s story. Spacey chews scenes in his mild but demanding manner and adds welcome shades of grey to a character of whom we never really know much about until the third act. While the script for Baby Driver has plenty of action, there are also well-placed reveals about Baby and his parents as the film progresses. By the time the film closes you want the characters to succeed and care if they do. Strangely, and to the film’s credit, you might have a fair amount of affection for “the bad guys” too. 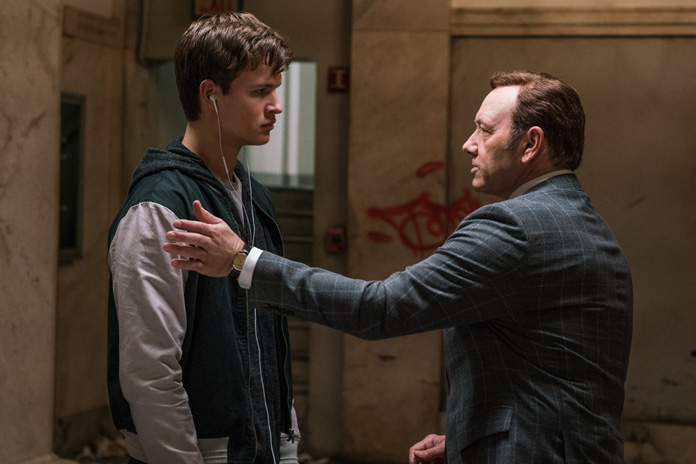 There is a lot of fun to be had with the many knowing homages and acknowledgements buried deep within the film with a subtle edge. The lyrics of the song Harlem Shuffle (sung by Bob & Earl with a very familiar hook to those that like to jump around) appear spray-painted on the walls during the opening sequence as the song plays and Baby dances through the street. There are multiple pop culture references to classic movies, such as Back to the Future (1985), and cameos galore, including the voice of Walter Hill who directed Driver (1978), which was one of the films used as an inspiration for Wright during the writing process. These films have obviously had a profound effect on the director. The film also uses foreshadowing in visuals and dialogue throughout (another trope Wright loves to utilise). These tools and cinematic surprises will be enjoyable Easter eggs for fans and will reveal themselves upon repeated viewings. 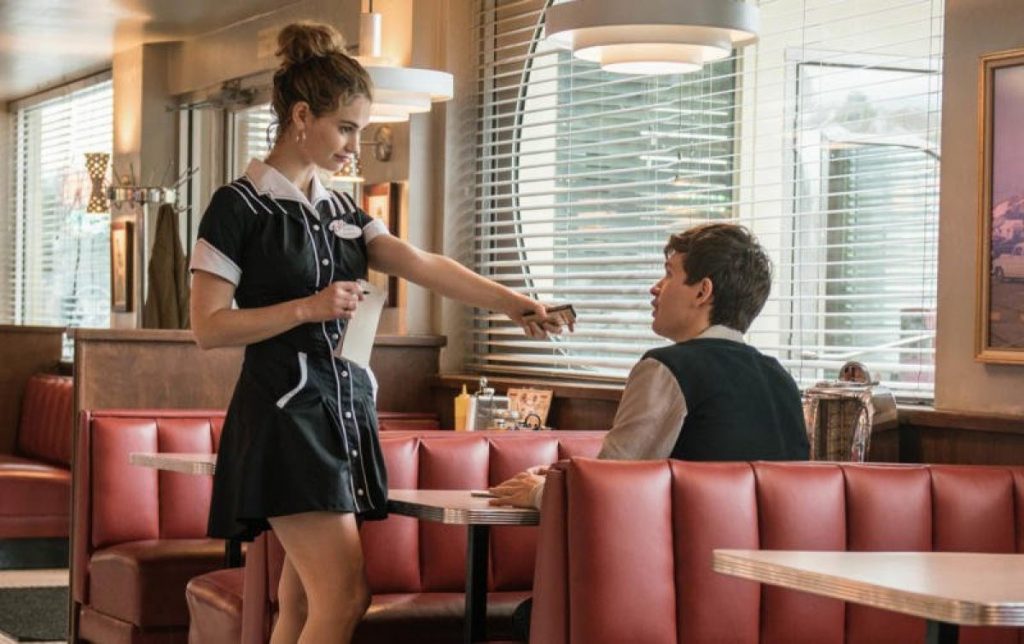 On the technical side of the film, the stunt team and cinematographer Bill Pope (Jungle Book, 2016) deserve high praise for achieving some classically inspired, jaw dropping and practical chase sequences. It wouldn’t be a surprise to see Baby Driver’s editing nominated for an Academy Award considering the musically-led Whiplash also secured the 2014 win. While utilising a 4/4 beat during music based sequences, the film is often cut in the style of a music clip and like Baby himself, drives right along with the tunes. The cross genres of music chosen adds a whole lot of fun to this feature not dissimilar in style to the now classic compilations of the early Tarantino films. Guaranteed to have toes tapping on the cinema floor right from the opening sequence, the soundtrack is a core part of the film’s construction and helps to enhance the experience in a very deliberate way. 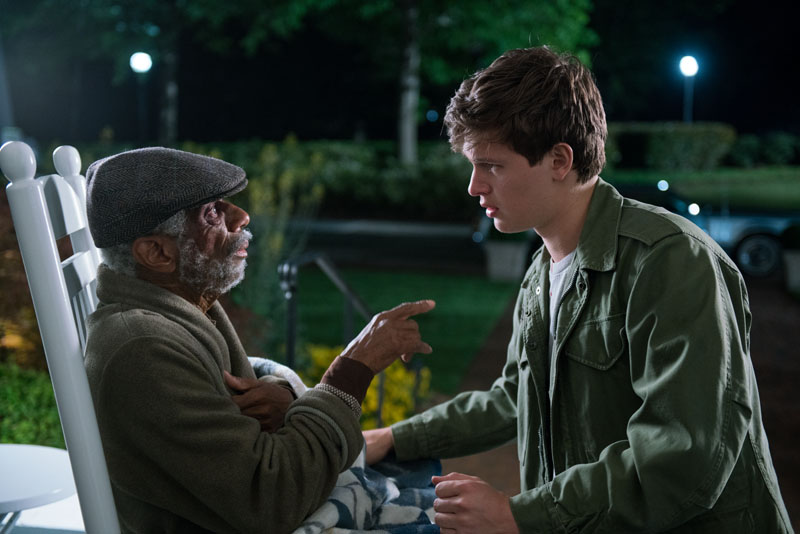 Baby Driver is a revved-up ride that will please most ages. While it has a pleasant sugar coating, the film drives headlong towards a bloody conclusion. This will please long-term Edgar Wright fans but may startle others not expecting it. The director has created a musically driven dangerous world almost impossible not to enjoy. The film’s action hits you straight away and the characters warm to the audience as the film progresses. It is rare to watch a film in which you enjoy the bad guys motives as much as those you believe to be good. While there isn’t exactly a grey subject matter in Baby Driver, most audience members will be wanting to see the destruction hit hard and while viewing this film you can count on it. While borrowing inspiration from the classic car chases from the 1970s, there a distinct 1950s feel to the relationship Baby and Debora share. This adds to the classic feel of this film and with repeated viewings Baby Driver may just become that for many people. Not perfect and not for everyone, it would be the most discerning of viewers and possibility someone slightly numb inside who doesn’t get a kick out of this beat driven, peddle heavy, crime caper.

Summary: Baby Driver is a revved-up ride that will please most ages. It would be the most discerning of viewers and possibility someone slightly numb inside who doesn’t get a kick out of this beat driven, peddle heavy, crime caper.