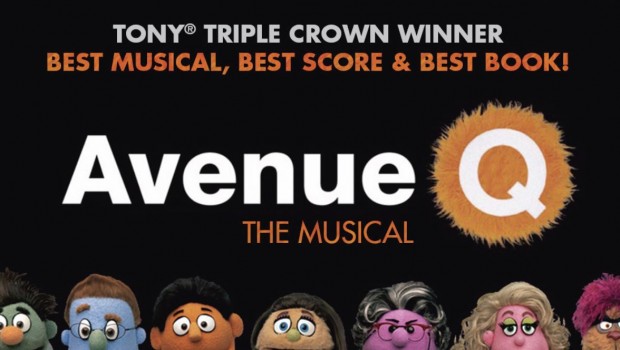 The hilariously side-splitting Avenue Q is set to return to Melbourne for a strictly limited season this August, bringing audiences a show that is part flesh, part felt and packed with heart.

Winner of the TONY® TRIPLE CROWN for BEST MUSICAL, BEST SCORE and BEST BOOK, Avenue Q, directed by Peter J Snee, is an irreverently witty and outright uproarious insight into a world where Sesame Street-esque puppets rub shoulders with humans.

This is a puppet show, however make no mistake, this is not your average kids puppet show. Join us as we follow the life of Princeton, a bright-eyed college graduate navigating his way through the multicultural, and at times raucous neighbourhood, Avenue Q in New York City.

Be prepared to be transported into a world of puppet debauchery, where puppets and humans mingle with gregarious consequences. From sexual congress, failed childhood stardom and excessive drinking to finding your purpose in life, Avenue Q hilariously navigates adult life from a puppet’s point of view – no strings attached!

WARNING: FULL PUPPET NUDITY AND OTHER VULGARITIES WILL INDUCE LAUGHTER.

“A hilarious and immensely thoughtful musical” – New York Theatre Guide
“This will have you laughing out loud the entire day” – Broadway Box
“You will laugh. You will think. You will reflect on your life in new ways that surprise you. And you
will become a puppet person. Guaranteed” – New York Theatre Guide
“Honestly touching” – Mercury News
“Avenue Q is still one of the hippest theatrical destinations in New York” – Back Stage
“They may have no legs of their own, but darned if those fuzzy creatures aren’t still standing, long after more full-bodied competition has bitten the dust” – The New York Times