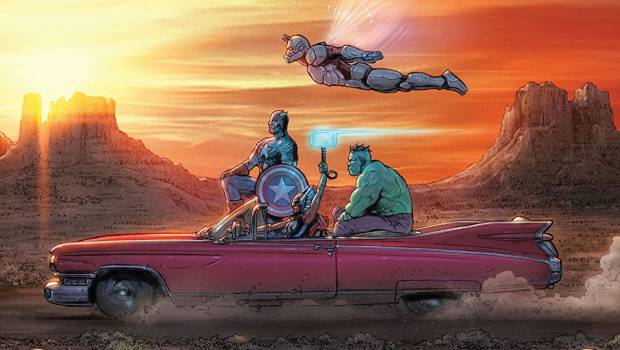 Avengers of the Wastelands (2020) #2 Review @edbrisson

Summary: Set in an alternate timeline where Dr Doom got what he wanted and defeated the world's heroes, a rag-tag group of youngsters have sworn to bring him to justice.

Set in an alternate timeline where Dr Doom got what he wanted and defeated the Avengers, a rag-tag group of youngsters, Bruce Banner Jnr, Danni Cage (the new wielder of Thor’s hammer), Dwight who has the Ant Man suit and a new Captain America are tracking Dr Doom’s armies across the wasteland in attempt to help them and hopefully get to Doom.

Quite an interesting set up for the story as it starts off with one of the bad guys saying even though they won against the heroes, it did not really make them happy as fighting against the forces of good was their entire purpose and now they have nothing.

This is an interesting concept and I thought the settings, characters and story worked well for it as they did not try and do too much in the one instalment. This is only a five part series and I did not think I had missed too much by not missing the first instalment. I would continue to get this one or wait for the collection as it does look promising.

Some great art here and it is not too dark and has some interesting character designs. The Mad Max aesthetic of the raiders works well and everyone seems to be using patched together technology.

Does remind of the old Cadillacs and Dinosaurs comic with the big old car they are driving around. They have a crash and Captain America just flips the car back over and it still drives.

I would recommend this if you are a fan of the Avengers and hopefully this does get a spinoff animated series as I think it would go well.