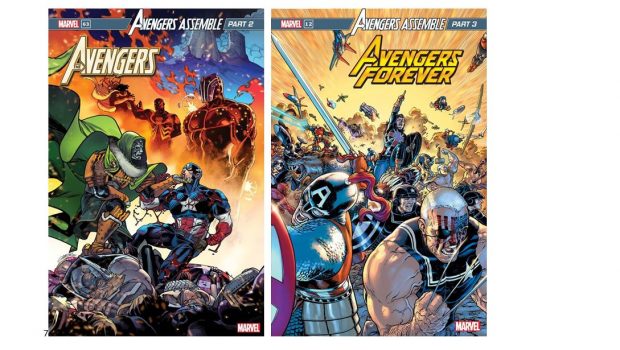 AVENGERS ASSEMBLE BRINGS JASON AARON’S AVENGERS ERA TO AN END WITH AN EXTRAORDINARY SAGA ACROSS SPACE AND TIME!

Starting in November, Marvel Comics visionary Jason Aaron will conclude his incredible work on the Avengers mythos in AVENGERS ASSEMBLE!

From throughout time and the far corners of the Multiverse, the Mightiest Heroes of All the Earths are assembling as never before for a battle beyond all imagining. A war that will take us from the prehistoric beginnings of an Earth under assault by the greatest villains who’ve ever lived to the watchtower that stands at the dark heart of the all and the always, where an army of unprecedented evil now rises. The biggest Avengers saga in Marvel history is on the horizon and right now, fans can see how the story will unfold come December!

In AVENGERS #63, it’s the showdown fans have been waiting for—THE BATTLE OF 1,000,000 BC! The Avengers stand face-to-face with their prehistoric counterparts, the Avengers of 1,000,000 BC! But if the two groups cannot work together, they have no hope of defeating Doom Supreme and his marauding band of Multiversal Masters of Evil, who have come to erase all of Marvel history as we know it..

In AVENGERS FOREVER #12, witness THE SIEGE OF INFINITY TOWER! The all Steve Rogers Howling Commandos. The interstellar air force that is the Carol Corps. The Star Panther. The God of Fists. The Invincible Ant-Man, Tony Stark. Together, they are the greatest army of Avengers ever assembled. But will they be enough to protect the Avengers Tower at Infinity’s End? Because Mephisto has come to claim that tower’s secrets, and he’s brought an army of his own.

“Four years of Avengers stories. Threads from really every major series I’ve worked on throughout my last decade and a half at Marvel, from Ghost Rider to Thor. It all leads to this. The biggest Avengers story I could possibly imagine,” Aaron said. “Featuring a cavalcade of characters from across creation. And I’m so deeply thrilled and honored that it all kicks off with an oversized Alpha issue that’s being drawn by the legendary Bryan Hitch, who I’m getting to work with here for the very first time. Avengers Assemble. Say the words like a prayer. It’s the only thing that can save you.”

Check out the covers below and stay tuned for more news about AVENGERS ASSEMBLE in the weeks ahead! For more information, visit Marvel.com.