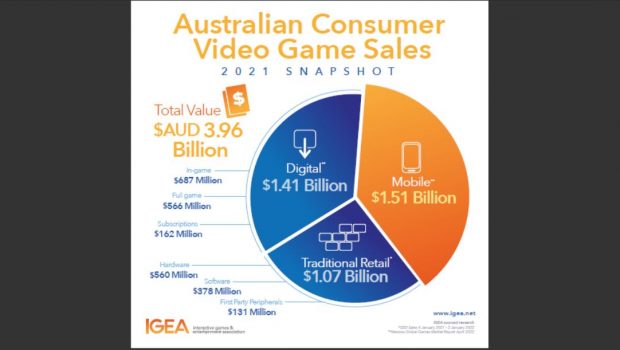 Australians’ love of playing video games is stronger than ever, according to consumer sales data released today by the Interactive Games and Entertainment Association (IGEA).

In 2021, Australians spent close to $4 billion on video games and consoles.

“Across GSD reporting, hardware in 2021 remained the only Australian video game category in year-on-year spending growth, despite ongoing stock shortages from the latest console generation. Increased spending on hardware was led by the ongoing demand for higher priced consoles, including the PlayStation 5 and Xbox Series X and S, and significant unit sales from Nintendo Switch. PlayStation 5 was the best-selling console in value sold in the Australian market for 2021, whilst the Nintendo Switch was the best-selling console in units sold.”

Tom Wijman, Head of Market Analysis & Forecasting at Newzoo, said, “Australia’s games market continued to grow in 2021, mainly due to the pandemic driving up game engagement and spending. Spending on digital PC games grew +11.5% year-on-year and was an important growth driver for the market—growing considerably above the global average. However, spending growth on mobile and digital console gaming content stayed below the global average.”

Ron Curry, CEO of IGEA, commented, “It was no surprise for IGEA to see consumer game sales and platforms perform strongly during 2021. Playing games provided a continued source of connection and entertainment for Australians throughout another year of the pandemic, with our Digital Australia 22 (DA22) report revealing that over 75% of us play games. All of the data confirms that games are one of the world’s most powerful entertainment mediums, and this looks set to continue.

“IGEA is also excited to see our local game development industry grow due to increased demand for games both locally and abroad.”

Games Sales Data (GSD) is a video game sales and reporting initiative for the games industry, by the games industry. GSD report on the sales of both physical retail and digital network markets. Launched in 2017 by ISFE, GSD provides sales figures across EMEA, expanding to APAC in late 2019. Sparkers are the operators of GSD on behalf of the video games industry.

Newzoo Newzoo is a provider of games market data and insights. The data provided to IGEA is sourced from the Newzoo Global Games Market Report April 2022.

IGEA (Interactive Games & Entertainment Association) is the peak industry association representing the voice of Australian and New Zealand companies in the computer and video games industry.  IGEA supports the business and public policy interests of the games industry, through advocacy, research and education programs. For more information, please visit www.igea.net