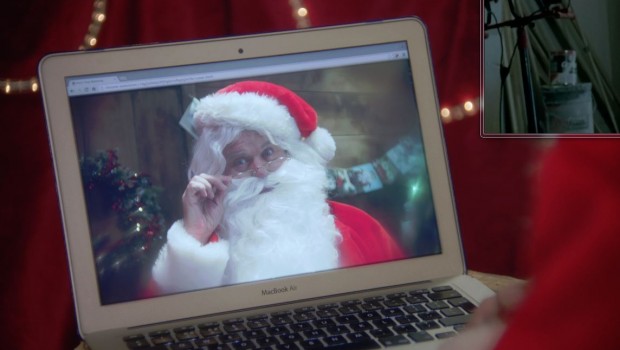 Children will eventually discover the truth about Santa but it’s now happening much earlier than parents are happy with. Once, kids would find the presents they’d asked Santa to deliver, hidden away in a cupboard. Or an older sibling or playground whispers would be the spoiler.

Today, as a result of social media, targeted advertising and the truth of Santa being just a quick Google search away, youngsters are ever more likely to come across the reality of Santa Claus while they’re online.

The age belief ends
According to new research* of 2,004 Australian parents, by virtual private network provider www.hidemyass.com, the internet seems to be playing such a major role in altering children’s Christmas beliefs that it may be contributing to driving down the average age youngsters stop believing in Santa. 1 in 6 (16.3 per cent) parents said that the internet was responsible for their children finding out that Santa Claus is not real.

The main online culprits
Of the parents who pointed the finger of blame at the internet, the most common online offender was advertising. Indeed, 44 per cent of children had their Santa suspicions raised after seeing ads online for the very gifts they’d wished for in their letters to the North Pole.

Additionally, over a third (38 per cent) performed a Google search for Santa and clicked onto a web page explaining that he was no more than a merry myth. While 25 per cent of children simply watched on in the background as their parents shopped online for Christmas presents.

Meanwhile, for one in 10 (9 per cent) Aussie children, their holiday happiness came crashing down after reading an unfortunate Tweet or Facebook post saying that Santa is make believe.

Reflecting the fact that this generation’s youngsters are effectively born internet literate, research also shows that 7 per cent of children have turned cyber sleuth and looked through their parents’ internet search history or online shopping accounts to find evidence that mum and dad had procured the Christmas presents, not Mr Claus and his elves.

Such junior detective work is obviously made all the easier with two thirds (64 per cent) of parents polled by Hide My Ass! never deleting their search history or logging out of online shopping accounts during the pre-Christmas season.

For all of these reasons it is perhaps no surprise that the overwhelming majority of parents (86 per cent) strongly believe that the internet has made it far easier for children today to find out the truth about Santa – and to find out earlier than they had when they were children.

Keep believing in Santa
To help parents keep the wonder alive, HMA! has made available a simple plug-in that can be installed on home computers to let children continue to browse the internet without stumbling on un-Christmassy news.

The Keep Believing in Santa plug-in (or extension if you’re a Chrome user) can be downloaded free from the www.hidemyass.com website – which has a set of trustworthy and approachable tools that equip the family to use the internet, freely, safely and privately. It takes seconds to install and has a single, Switch On function to effectively hide any search results, web pages, tweets or Facebook posts where certain combinations of words such as ‘Santa’ and ‘fake’ appear. Instead, kids will only see a reassuring picture of Santa.

The development of the software has already been welcomed by 62 per cent of parents in Australia who are keen to see an online feature that will help preserve the mystery of Santa Claus for their children that little bit longer – something 53 per cent see as important.

Santa Claus himself has issued a video appeal today urging parents to install the software and help protect the Christmas spirit for their little ones. This can be viewed here: www.hidemyass.com/keep-believing-in-santa.

Santa Claus concluded: “Parents! It has come to my attention that some people are taking the joy away from Christmas, by whispering on the inter-web that I’m nothing but a figment of your imagination. If you don’t want your little whippersnappers to see falsehoods conjured up by internet imps, down-load this thingamabob that covers all the wicked fibs with jolly pictures of me in my workshop. Ho Ho Ho!”

Cian Mckenna-Charley, of www.hidemyass.com, commented: “We all spend so much of our time on the internet that the lines between ‘online’ and ‘offline’ aren’t just blurred, they’ve been erased completely. Consequently, as our research shows, this constant connectivity makes it far easier for children to discover online content bringing Santa’s existence into question.

“Not only is there a higher likelihood of the internet now being the main source of a child’s belief in Santa ending, it can also result in youngsters finding out sooner than for those born before the digital era. With this campaign, we wanted to give parents an optional tool that would allow them to maintain the magic of Christmas and the mystery of Santa for that little bit longer.”