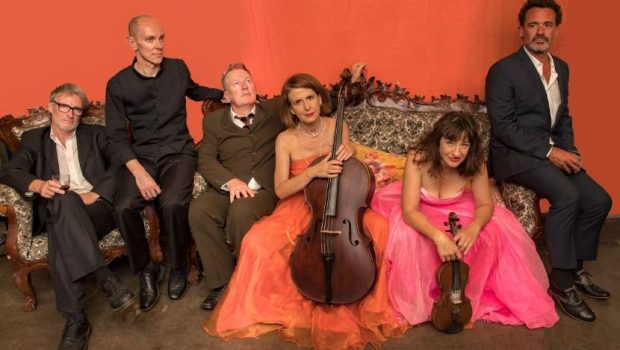 The song writing genius of David Bridie combined with the glorious strings of Helen Mountfort’s cello and Hope Csutoros’ violin are high in the curious collision of elements that have made My Friend The Chocolate Cake a big concert draw, triple ARIA winners and a vivid presence on countless film and TV soundtracks for more than two and a half decades. Their album history is a multi-dimensional mural of modern Australia that illustrates its geography, its political mores and its predominantly suburban identity, all by the kind of stealth that makes the most haunting, exhilarating and enduring pop music.

David Bridie says The Revival Meeting is “a collection of songs in which the protagonist (who could be you, who could be me, who could be the woman next door) is trying to find their place in an increasingly mad world… Songs that seek out beauty in the simple, wisdom in the plain, sparkle in the ordinary. To see the world through a similar prism to the Sydney painter Jeffrey Smart – urban landscapes, stark portrayals of contemporary life, the joy of shape and light and colour.

Songs about love and small noises and futility and travelling and vague notions of justice and dying, the Pacific and balloons and odd people. Instrumentals from both ends of the spectrum, that make you tap your feet, or ponder. Songs with three notes in them, beats that hammer, chords that ring out, tunes that meander and make you shrug your shoulders, melodies to make you hum or single along. Cello is the voice, Violin the expression, and piano notes ring out through the valley.” [Read the latest media release in full here]