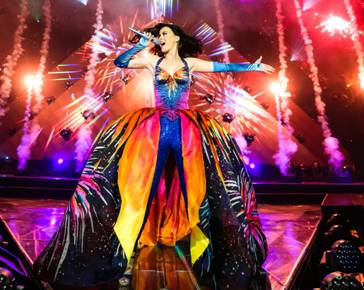 AUSTRALIA: THE WORLD’S FAVOURITE STAR IS READY TO ROAR!

International superstar, Katy Perry, is bringing her PRISMATIC WORLD TOUR to Australia in just over 2 weeks, kicking off in Perth on Friday 7 November and playing a staggering 23 shows across Australia in Adelaide, Melbourne, Sydney and Brisbane.  The tour is presented by Telstra Thanks and Dainty Group.

In the US, the critics have been raving about the show:

The superstar is at the top of her game, and Prismatic’s Brooklyn debut shone bright. Billboard

The Prismatic tour, for all its expense and atom-splitting technology, is above all else fun, smart and crowd-pleasing, and I’ll take that over the self-serious bombast that usually accompanies shows of this scale any day of the week. The Village Voice

The mammoth “Prismatic” world tour… is the definition of pop perfection and solidifies Perry’s perch as the reigning queen of the genre.  Atlanta Journal Constitution

It was clear that during Perry’s sold-out show at the Verizon Center on Tuesday night that no one was supposed to do anything but scream, dance with reckless abandon and take in the brightly colored spectacle in front of them. The Washington Post

The 23 date Prismatic tour is in support of Katy’s smash hit album PRISM which debuted at number one in Australia and has since been certified Triple Platinum. The album has now exceeded TEENAGE DREAM sales and given Katy her biggest ever single in Australia with Roar certified 10 x Platinum and also features the hit Dark Horse which has achieved in excess of 4 x platinum sales.  Her latest single This Is How We Do is another Platinum hit and the video has amassed over 127 million views since release!

To celebrate the Australian leg of the PRISMATIC TOUR Katy’s much anticipated worldwide “Birthday” promotion commences in Australia this week and will be a feature for her fans. Those Katy Perry fans whose birthday falls in November or December this year have the chance to be hand-picked by Katy to join her on stage during her huge hit Birthday. In order to qualify, entrants must have a ticket to a Katy show in their birthday month.

Sharing the state-of-the-art PRISMATIC stage, Betty Who will appear on the Australian Tour from 7 November – 28 November, with TOVE LO finishing the final leg from 30 November -15 December.